It has been a long time coming, but direct federal fiscal recovery aid for local governments has finally arrived. And it appears to have been worth the wait.

Of the $1.9 trillion COVID-19 relief package, the American Rescue Plan Act of 2021, $130.2 billion is earmarked for distribution to localities. Payments are to be distributed directly from the U.S. Treasury to counties and certain metropolitan cities. Local governments not fitting either of those categories, which the legislation refers to as “nonentitlement units of local government” will receive a pass-through payment from Michigan’s Treasury Department. In total, the aid package represents nearly $4.4 billion in new public revenues for Michigan’s government units.

Michigan’s metropolitan cities will receive just over $1.78 billion. Allocations are determined by CBDG formula as per section 106 (b) (1) of the Housing and Community Development Act of 1974. The first half of these funds are to be distributed within 60 days after the U.S. Treasurer receives the required certification signed by the locality’s fiscal officer. The second half of the local unit’s funds will be allocated one year later.

These federal stimulus dollars will benefit Michigan’s metropolitan cities, especially localities that have been struggling financially for some time. In some cases, such as in Benton Harbor, Muskegon Heights, Flint, Saginaw and Lincoln Park, the federal stimulus funds are 50% or greater than the governmental and business revenues these cities generated in 2020 (Table 1).

Table 1: Stimulus Dollars as Share of Total Revenue by City

An additional $686 million will be set aside for all other general-purpose governments that are not counties or metropolitan cities. According to the act, the state is required to distribute half of these funds within 30 days of receiving them. The second half of each local unit’s funds will be allocated one year later. Funds will be distributed based on the relative population counts. However, local government units cannot draw more than 75% of the pre-pandemic annual budget. All funds not distributed due to the funding cap, will be returned to the U.S. Treasury.

A local government has a lot of latitude in what it is able to use the stimulus relief funds for including to defray costs incurred, to replace revenue or mitigate negative economic impacts sustained as result of the COVID-19 public health emergency. Funds can be used for water, sewer and broadband infrastructure. However, these funds cannot be used to support tax cuts or shore up pension deficits. Recipient local governments will be required to provide to the U.S. Treasury detailed accounting of how these funds were used. Funds are to be spent by the end of calendar year 2024.

We modeled the economic effects of the expected distribution of the Coronavirus Relief Fund. To do this we created 84 economic simulation models using IMPLAN - one for each of the 83 counties and one for the state of Michigan. The IMPLAN model is an input-output economic model, commonly applied to estimating regional or state-level economic impacts of direct injections into the economy. In this analysis, federal funds allocated under the COVID-19 relief bill are treated as new outside funds injected into the state and county economies. By assumption, these funds will only exist in these economies because of the pandemic relief bill.

Table 2 shows the estimated total effects for the State and breaks those out into expected county level estimates. Details of the modeling approach can be found below. The Michigan economy will capture a share of the in-state government spending from the $4.4 billion of new public revenues. The share that is captured is expected to continue to recirculate throughout the economy as secondary expenditures, where one’s expenditures gives rise to another’s revenues. As dollars are spent and re-spent throughout the economy, different sectors are impacted through a process of diffusion. That is, a local expenditure for road repair may eventually contribute to one’s purchase of a movie ticket as the dollars fan out across the economy. Once we account for how these new dollars circulate throughout the economy, the $4.4 billion in direct expenditures transition to a total increase in transactions by $7.35 billion. These new transactions are expected to support some 43,000 Michigan jobs with annual labor earnings of just under $3.6 billion. Accounting for other measures of income, we expect that the stimulus package will increase regional income, or gross state product, by nearly $6.7 billion. 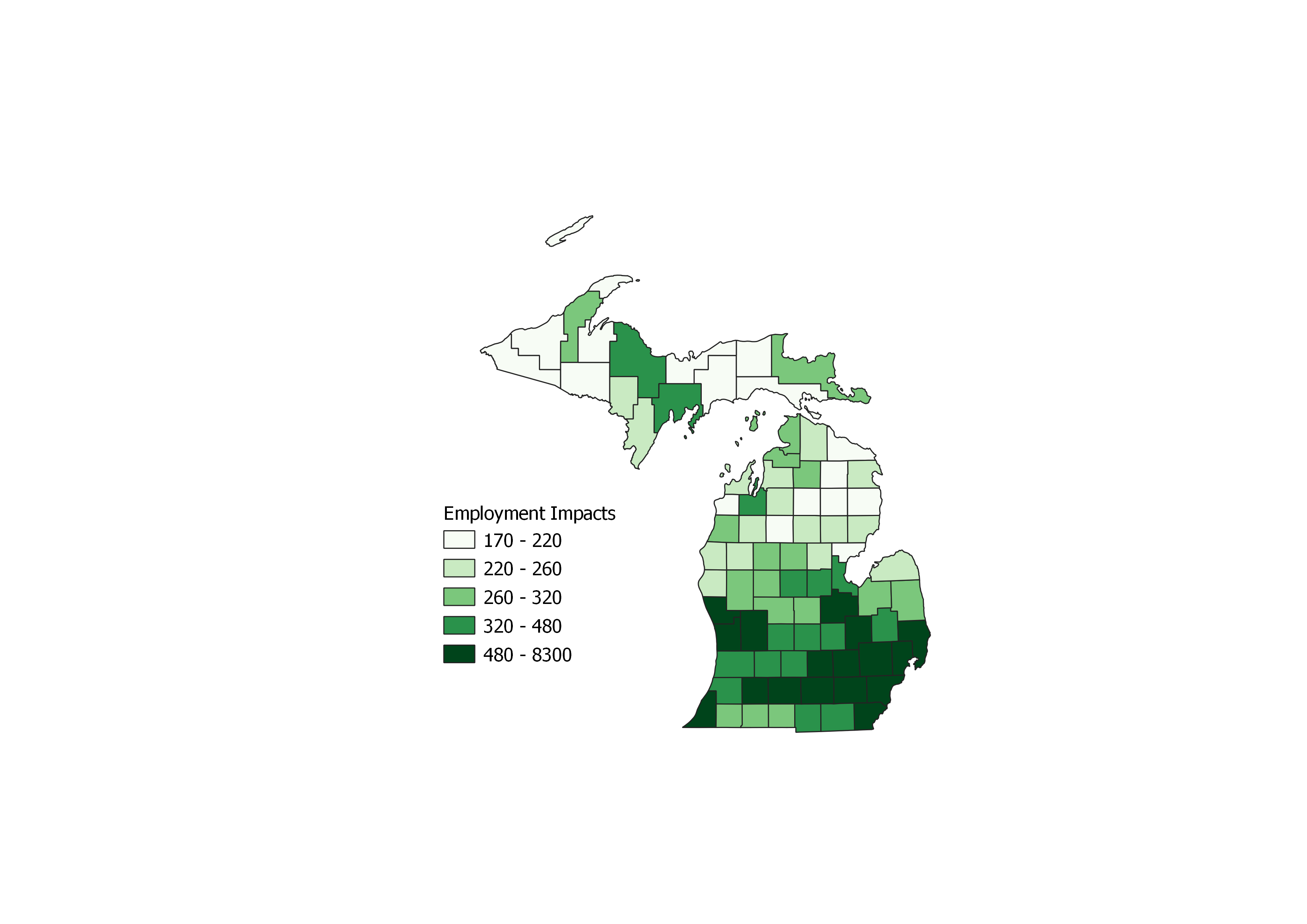 As Table 2 shows, the expected impacts vary by county. Figures 1-3 show the spatial distribution of expected impacts, revealing that higher population counties are likely to experience the larger share of impacts. This is partially because the direct distribution of aid is based on relative population counts, but it also reflects that more populous counties capture a larger share of the instate dollars as they circulate throughout the economy.

Modeling Assumptions and the IMPLAN Model

Modeling entailed using IMPLAN Pro for Michigan. IMPLAN, or economic input-output models in general, use basic constructs of economic theory to model economic impacts of transactions that ripple throughout the economy. The models recognize that dollars introduced into a local economy recirculate in that economy over the course of a year and that one party’s revenue becomes another’s expenditure. It does this by tracing transactions throughout the economy in a system of double-entry social accounting called a social accounting matrix (SAM). The SAM is made up of 528 industries and institutions such as households, governments, corporations as well as import and export sectors that account for trade with regions outside of the modeling region. As new dollars are spent by one entity, they are received by another before being re-spent. This cycle of spending continues up to the point that the dollars leave the local economy to purchase imported goods and services.

The model starts with estimates of direct effects, measured in dollars of relief funds spent in the state. Not all relief funds remain captured in the state economy. A share of public expenditures goes to the purchase goods and services originating from outside the modeling region. We use estimated regional purchase coefficients to estimate the share of local government funds that remain in state. 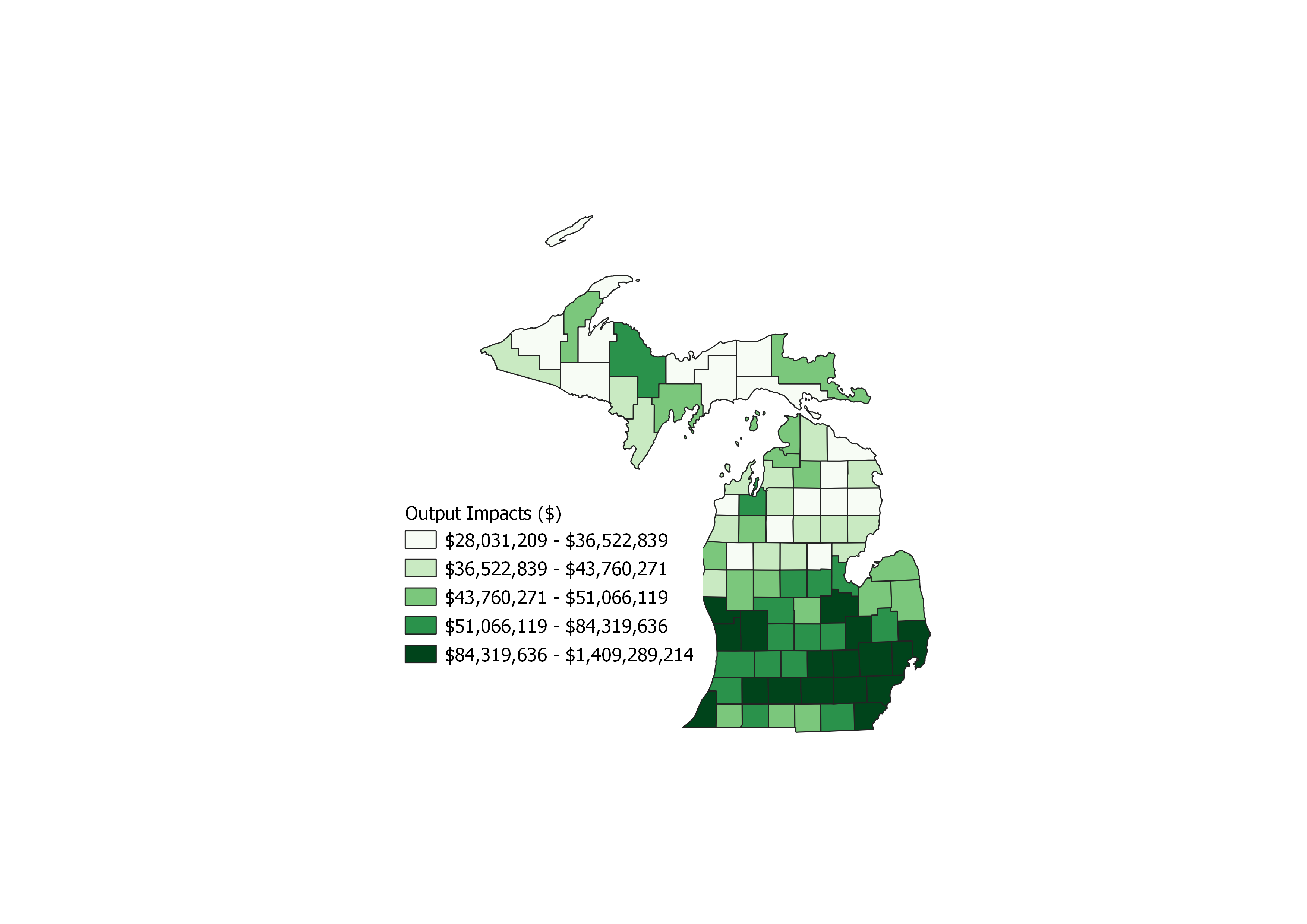 The IMPLAN model provides economic impact estimates in four measures. First, all modeling relationships are based on total value of transactions, or sales. Sales impacts are also called output impacts. Other indicators of economic impacts include employment, labor income and regional income. Each of these three indicators are measured by fixed ratios to output for each of the 528 industries and sectors. That is, at the base year, if an industry has sales of $10 million and employs 5 people, then the fixed ratio of employment to sales (output) for this industry would be $2 million in sales per 1 employee. If industry sales increase to $20 million, we expect employment to increase by 5 people to 10 employees. Labor income and regional income fixed ratios are calculated similarly. Finally, regional income is measured as total income and is the sum of labor income, proprietors’ income and indirect business tax. Other terms for regional income include gross state product and value added.

The nature of economic impacts requires that the sum of the county-level economic impacts will be less than the aggregate impact at the state level. That is, since county-level economies are more dependent on external economies, like the state, the extent of secondary transactions realized at the county level is smaller than that at the state level. Hence, to account for the larger secondary transactions accruing to the state than those accruing to the individual counties, total economic impacts are modeled at the state level and then are allocated to the counties based on county-specific criteria. This is accomplished by first allocating federal pandemic relief funds to the counties, which are distributed along two channels – direct to each county and to cities/townships. We apply county population weights to allocate city and township relief funds to the county. The sum of the county allocations reproduces the total expected federal relief infusion to the state. The state level and county level economic impacts are estimated in isolation. The county-level awards are the estimated relief fund allocations to each county, while the county-level direct effect is the estimated local catchment of expenditures as indicated by the regional purchase coefficients.

Welcome to the Thrive Local Blog

Headlee and Proposal A Explained for Michigan Counties