When saving seed, distance between other suitable pollinizers makes a difference for seed purity. Some plants are self-pollinated and others are cross-pollinated by wind or insects. Pollination biology is important in maintaining genetic purity.

In a previous Michigan State University Extension article titled “Seed transmitted diseases: It’s time we had the STD talk,” I wrote about the potential dangers of seed saving and how to protect against possible diseases. Another important aspect to successful seed saving is to understand the pollination biology of the crop you are saving. Some plants are termed self-pollinated while others are cross-pollinated. Planting (or protection) strategy to maintain genetic integrity requires an understanding of how the crop is pollinated.

Self-pollinated crops are those able to be successfully pollinated with their own pollen without suffering “inbreeding depression” – a term given to the significantly poorer performance of offspring in comparison to their parents. Flowers of some members of this group are actually pollinated before they open. Self-pollinators do not suffer inbreeding depression, making them the easiest group to save seed – they only need to be planted far enough apart to keep seed from individual plantings separate during harvest.

Cross-pollinated crops can usually be self-pollinated, but they generally suffer inbreeding depression and therefore much prefer to be pollinated by another related plant. Cross-pollinators sometimes, but not always, signal this desire by having separate male and female plants – a term known as dioecious (asparagus) – or have male and female flowers separate, but on the same plant – a term known as monoecious (cucurbits, Photos 1-2, and corn). These plants require a mechanism to move pollen from male flowers to female flowers. This is accomplished by insects such as bees, butterflies, moths, etc., or wind. This group presents the greatest challenge in maintaining purity, requiring greater distances between similar plants. Distances can vary with insect pollinated crops, depending on how wide an area the insect will forage with bees foraging over a larger area compared to other insect pollinators. 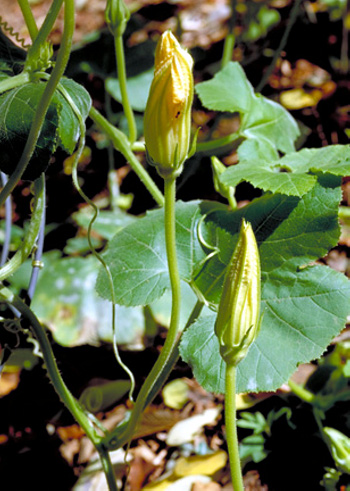 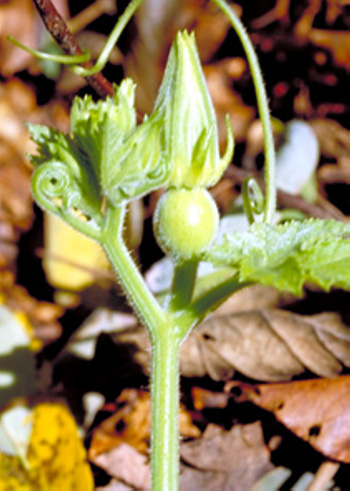 There is a difference between pollination and fertilization needed for fruit production and what is needed to maintain uniformity of characteristics in the next generation. Peppers, for example, require pollination and successful fertilization for fruit development. Pollen needed for fruit development of a bell pepper can come from itself or the neighboring jalapeno or banana. From the standpoint of fruit development, you don’t care where it comes from, all you want is the fruit. But if you are saving seed, you do care since you don’t want the next and future generations taking on jalapeno or banana traits – you want bells. So you need to separate it far enough from other peppers to maintain the bell traits. The same is true for the cucurbit and other groups.

If the initial plant you use to begin your seed saving efforts is a hybrid, most seedlings will be different than the parent plant simply because you have shuffled the genetic deck and mixed everything up. You will have to go through several generations of selecting for traits you desire before getting a suitable performing population. Because of this, you would be better off starting with an already existing suitable open pollinated selection.

Insect-pollinated crops are often characterized by having flowers attractive to insect pollinators either through color or large amounts of nectar or pollen and the pollen is often heavy. Wind-pollinated crops generally produce the largest amount of pollen that is generally lightweight and easily wind disseminated. (Think pine trees for this one. Readers with dark colored cars know exactly what I am talking about.)

Table 1 lists some common vegetable crops, how they are pollinated and suggested distances between plantings for open-pollinated seed production. Many require significant distances from similar plants to assure seed purity – distances too great for the average seed saver. Other separation techniques are also possible. A separation in time of flowering works well for corn. Screen cages that exclude insects can be used for insect pollinated crops.

Table 1. Commonly grown vegetable crops, their pollination biology and distances between plantings if you are saving seed and desire to maintain stability. This is not an exhaustive list. (Largely taken from Knott’s Handbook for Vegetable Growers, Maynard and Hochmuth)