MSU AgBioResearch scientist Gale Strasburg has been awarded a nearly $1 million grant from the U.S. Department of Agriculture (USDA) to study the impact of temperature extremes on turkey development.

EAST LANSING, Mich. – Michigan State University (MSU) AgBioResearch scientist Gale Strasburg has been awarded a nearly $1 million grant from the U.S. Department of Agriculture (USDA) to study the impact of temperature extremes on turkey development. The project is one of several recently announced by the USDA that will assess the impact of climate change on the livestock and poultry industries.

“Basically, we’re recognizing the fact that, with climate change, we expect there to be a lot more variation and extremes of heat and cold, even though the average temperature trend is slowly going up,”  said Strasburg, a professor in the Department of Food Science and Human Nutrition. “We need to look at how animals are going to respond to not just the average increase but also the extremes.”

Commercial turkeys are born in temperature-controlled hatcheries, but within a day or so, most are transported to farms where they grow until they reach maturity. During the journey, the newly hatched turkeys are exposed for the first time to the ambient temperature of the outdoor environment.

“The bottom line here is that we want to know how turkeys respond to heat and cold stress,” Strasburg said. “We have some evidence that when turkeys are exposed to extremes of heat or cold in the first few days after they hatch, there can be long-lasting effects on breast muscle structure, which is the most valuable part of the turkey.”

Strasburg and his team will study the effects of temperature spikes using two parallel methods: one on cultures of turkey satellite cells and one on the newly hatched birds themselves. Satellite cells are stem cells that are adjacent to muscle fibers and are the source of new muscle tissue in the body. Preliminary evidence from Strasburg’s team indicates that exposure to extreme temperatures shortly after hatching can cause satellite cells to differentiate into fat tissue instead of muscle, reducing the quality of the meat. 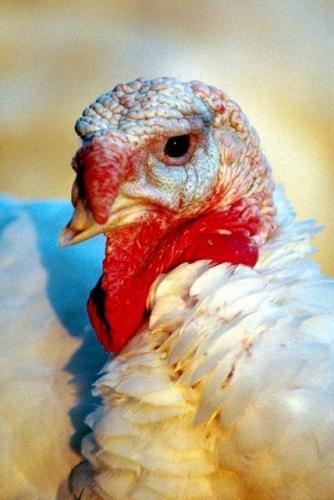 The methods will expose both turkeys and satellite cell cultures to a range of temperatures and measure both the rate of growth and the type of tissue that develops under each condition. Strasburg and fellow MSU researcher Bill Atchison will look at whether extreme temperatures produce a change in the concentration of calcium ions within the cells, which could lead to abnormal muscle growth.  As part of the multi-institutional project, researchers at Ohio State University will examine both the cell cultures and tissue samples from the live turkeys for temperature-driven alterations in cell growth and type, and scientists at the University of Minnesota will analyze the change in expression of genes.

“What we’re doing is documenting the problem,” Strasburg said. “What we predict is that those exposed to extreme temperatures will have reduced meat quality. Essentially, we’re trying to line up the cellular and genetic responses with their causes between both experiments.”

Eventually Strasburg wants to develop an adaptation strategy that the poultry industry can implement to mitigate the negative effects of temperature extremes.

“We want the birds to be more heat-tolerant,” Strasburg said. “The turkey industry is really interested in a consistent product, and being able to reduce the effects of extreme temperatures will help them maintain or improve that consistency.”

Strasburg and his research team hypothesize that exposing incubating eggs to a mild temperature increase for two to three hours per day toward the end of their embryonic development will enhance the turkeys’ ability to adapt to thermal stress.

Strasburg has been studying genetic and cellular issues in turkeys for over a decade, and he sees this project as the next logical extension of his work. As economies develop around the world, particularly in China, Africa and Southeast Asia, the demand for turkey and other meat products has increased, despite climate change. Strasburg hopes his work will help the turkey industry meet growing demand worldwide.

“The more efficiently you can produce high quality protein, the more advantageous your position will become,” Strasburg said. “This adaptation strategy, we think, will help our producers do this easily as a component of management practices and without the need to wait for the benefits of breeding more stress-tolerant birds.”

MSU AgBioResearch engages in innovative, leading-edge research that combines scientific expertise with practical experience to generate economic prosperity, sustain natural resources, and enhance the quality of life in Michigan, the nation and the world. It encompasses the work of more than 300 scientists in seven MSU colleges -- Agriculture and Natural Resources, Arts and Letters, Communication Arts and Sciences, Engineering, Natural Science, Social Science and Veterinary Medicine -- and has a network of 13 research centers across the state.