Researchers are looking at large-scale ways to recycle the wastewater created by human activity.

Safe, clean water is one of the foundational needs of life, but the resource is diminishing as pollution permeates the world. Society has been forced to recycle water of varying quality throughout history, requiring innovative treatment techniques. In the United States during the 19th century, the primary means of dealing with wastewater was to separate it from fresh water using cesspools, dry sewage collection and privy vaults. These methods are ineffective in regions with a high population density, so centralized sewer systems
were widely developed across the country. Reuse of these wastewaters without proper handling, however, created health and environmental concerns.

Today much of the nation’s wastewater is handled by centralized treatment plants, which can come at a high energy cost and remove water from local systems. With population growth continuing, the need for water is also rising. Researchers are looking at large-scale ways to recycle the wastewater created by human activity.

Steve Safferman, an associate professor of biosystems and agricultural engineering at Michigan State University (MSU), has been working for the past decade to optimize the use of natural resources such as soil to purify water through costeffective and energy-efficient methods.

“When I came to MSU about 10 years ago, one of my first projects was with several major food processors that were having issues with their wastewater impacting groundwater,” Safferman said. “The water was being discharged into the soil, going through the soil, and then entering the groundwater without treatment.”

Excessive levels of metals were creating problems in plumbing systems and were on the cusp of being a human health concern. The origin of the contamination was not the wastewater in some cases. It was the soil.

“It’s a very complex situation because the metals were not actually in the wastewater,” Safferman said. “They were in the soil. When you put a lot of water in the soil, it causes a reaction that makes those metals mobilize. They actually become soluble in water. There was not a good understanding of management strategies to maximize the amount of wastewater that can be successfully treated without impacting groundwater. We’ve built a research program around these challenges that we are still working on today.”

Pinpointing the right amount of wastewater the soil could filter without contaminating groundwater has become the ultimate goal. The group has not found conclusive operational strategies from past projects with scientifically based recommendations.

Conducting laboratory tests, Safferman’s team has been trying to identify what he calls a “prescriptive number” using field data. This would allow the researchers to follow a basic outline of how much water and organic material the soil can effectively filter.

Real-time soil monitoring has been implemented as well. In his lab, Safferman set up columns filled with soil, each 18 inches in diameter and fitted 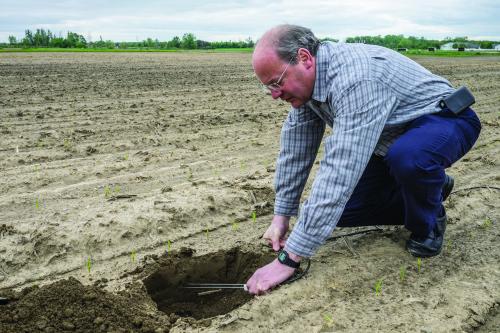 with a sensor. This controlled environment proved to be a good predictor of when the soil was not adequately treating wastewater, so the equipment was taken to the field.

Powered by solar panels, the sensors operate via radio transmitters, which then send information to a computer, showing researchers the amount of water, temperature and other soil conditions. Sitting in his MSU office, Safferman can observe conditions at a site hundreds of miles away.

Some food processors have adopted this technique, in addition to the prescriptive number work, and now use a dual method of determining the maximum amount of water that can be added to the soil. This ensures that conditions conducive to groundwater contamination are avoided.

“The problem is that every soil is different,” Safferman said. “Wastewater is different. Each area has to be customized depending on the variables. That’s why this is so important. I think the bottom line is that we can really use our soil more strategically to be more environmentally conscious, sustainable and economical. “Strategic management allows the wastewater to become a resource to irrigate an important commodity and replace nutrients that originate from nonrenewable resources. But we have to do it right or we could create bigger problems. When we think about using soil to filter water, it’s old technology that we’re realizing is very effective if you havethe right design.”

Converging on New York City in September 2000, world leaders met to discuss a global commitment to combating some of the most enduring issues facing their countries. The summit prompted the creation of Millennium Development Goals (MDGs), a list of priorities to be completed by 2015, such as cutting poverty in half and reducing the spread of HIV/AIDS. Though some of the goals have been reached and even exceeded, a great deal of work on water quality and sanitation remains to be done. For Joan Rose, the Homer Nowlin Chair for Water Research at MSU, this is unacceptable.

“Each country was supposed to reduce by half the number of people who did not have access to clean drinking water and sanitation,” Rose said. “On the drinking water side, progress was made and MDGs were met. However, with regard to sanitation, very little progress was made. I was recently in India at an institute of public health doing lectures, and right out the window was an open-defecation area. We need to address this issue as quickly as possible. It is now known that without access to sanitation, not only are enteric (gastrointestinal) diseases prevalent, this is linked to malnutrition.”

In partnership with the United Nations Educational, Scientific and Cultural Organization, a team of researchers led by Rose is looking to address water safety through the Global Water Pathogens Project (GWPP). 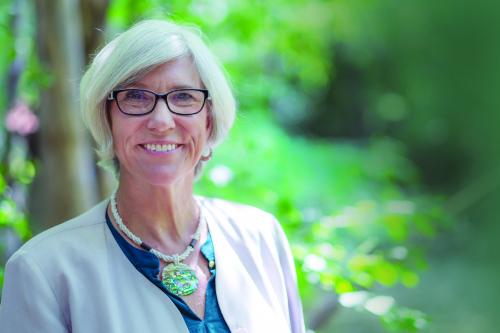 The international initiative is working on a public database with contributions from roughly 150 authors. While the 1983 publication “Sanitation and disease: Health aspects of excreta and wastewater management” has been the gold standard in the field for more than three decades, the new project will offer updated information for the scientific and engineering communities. Rose believes the GWPP, which wraps up in 2017, will provide policymakers with the evidence needed to make risk-based and economically beneficial decisions when drafting future plans.

“In some places around the world, they don’t even have sewers,” Rose said. “If they do, there may not be wastewater treatment. Now we’re starting to talk about what’s known as resource recovery, which is getting energy, water and nutrients from wastewater. For instance, we treat water at a very high level and use it for drinking water, which is a growing trend and further shows the need to be resourceful.”

Rose cites population growth, coupled with a lack of infrastructure in some areas, as a major factor in the degradation of water, soil and the environment — not only in underdeveloped parts of the world but in Michigan also. Through a project of analyzing sediment core samples taken from two locations in Lake St. Clair, a story of waste mismanagement unfolds.

With funding from the National Science Foundation, researchers have been able to view core samples from more than 100 years ago alongside current conditions. Most of the major industrial milestones between become clearly evident.

Examining the microbial pollutants in each sample, Rose and her colleagues can match them to a point in time when contamination was introduced to the area. Much of the pollution was a result of untreated waste being dumped into waterways. Because of different degrees of industrialization and population density, the two areas from which samples were taken varied greatly.

Whether it involves education and innovation on appropriate sanitation techniques through global collaborations like the GWPP or providing safe drinking and recreational waters in the Great Lakes, Rose insists that understanding how all of the research elements interact is essential to finding answers.

“What we do on the land is the source of contaminants, so we need to manage the land better,” Rose said. “We know that in some places in the world soil is being depleted of its nutrients. We’re not going to have soil that can grow anything if we don’t have nutrients and water. It’s the idea of thinking holistically about the cycle of humans, waste, energy, water and soil, and how all of it together creates a sustainable future.”

Seeking to make a splash with the 2012 Global Water Initiative, MSU hired 16 new faculty members identified as leaders who could deliver solutions to some of the planet’s chief water challenges.

The first of these staff additions was Bruno Basso, a professor in the Department of Geological Sciences, who brings a multifaceted methodology of building resilient natural resources. Trained in crop and soil sciences, he closely monitors the interaction among weather, soil and land management, with a focus on sustainable agriculture. Using leading-edge technology and a $4.9 million grant from the U.S. Department of Agriculture National Institute of Food and Agriculture, Basso and a group of MSU researchers are changing the way largescale American farms approach operations.

“I have always thought that it was extremely important to look at how plants use water and soil,” Basso said. “How can we use the system in a way that we can get the highest yield for the same amount of water and nutrients? Studying the combination of weather, soil and management as it relates to agriculture, it didn’t take me long to learn that an integrated approach was necessary. Each of these components is never working alone.”

Basso utilizes tools that promote longterm viability, including the System Approach to Land Use Sustainability (SALUS) model. Forged at MSU, the program models conditions of the crop, soil, water and nutrients over space and time. According to the Environmental Protection Agency, more than 400 million acres of U.S. land are used for farming, and there is great diversity in the soils. SALUS allows growers to manage their crops more efficiently by applying appropriate practices to each field area. The model can also simulate situations across multiple years under a variety of weather patterns and predict the impacts on yield, soil and the environment. 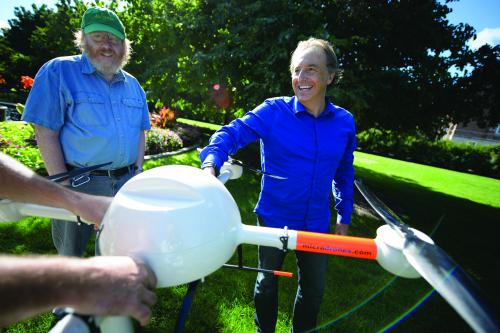 An unmanned aerial vehicle (UAV), more commonly called a drone, helps Basso and his team collect data on crops through three attached sensors that observe plant nutrients, temperature and size. Integrating SALUS and data from the UAV, Basso is able to perform what he calls “precision agriculture” — doing the right thing, at the right place and time, and in the right manner.

“One of the big drivers in my research, in the case of water and soil, is to minimize nitrate leaching, which contributes to loss of nutrients from the soil and groundwater contamination,” Basso said. “It’s all about finding the threshold where revenue of the farm increases without increasing negative environmental impact. Another way of defining it is climate-smart agriculture, where we are building healthy soil and increasing organic matter that makes farming sustainable while using resources like water more efficiently.”

Along with his technology-based studies, Basso recognizes the importance of a social component to sustainability and natural resource management. Without the proper education and training of individuals locally operating farms, in the U.S. and abroad, the innovative techniques developed by researchers may be rendered useless.

“When farmers make a decision in this country, they have training and many resources to choose from to make the best decision — the Internet, television, radio and magazines — but it’s still difficult for them,” Basso said. “In other countries, if you don’t get the local people involved through education, you won’t have any sustainable impact. There is a strong relationship between social science and biophysical science. We try to always take that into account.”