Managers of northern Michigan forests may not see the birds for the trees — or at least are in danger of losing sight of songbird neighborhoods when looking out for timber harvests. 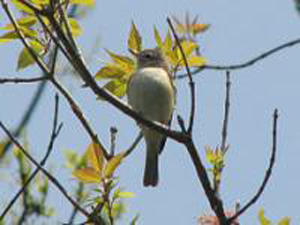 Managers of northern Michigan forests may not see the birds for the trees — or at least are in danger of losing sight of songbird neighborhoods when looking out for timber harvests.

In a novel look at managing the future’s timber harvest while being mindful of the effect on key songbirds in Michigan’s Upper Peninsula, MSU AgBioResearch scientists and other researchers use a new forest simulation model for the first time to look at what timber-friendly hardwood regeneration can mean to bird habitat. And it’s a long-range look, given that the time lag between forest management decisions and impact is generations.

“This work nicely illustrates that the influence of deer and forest management practices on forest regeneration have effects on more than just future wood production,” said Michael Walters, AgBioResearch scientist, associate professor of forestry. “It is a preview of things to come – it’s the first study based largely on our new integrated ecological-economic model, which allows us to examine the effects of various forest and wildlife management options on a broad range of ecosystem values. We believe that it will be a useful tool for managers trying to negotiate the complex task of managing forested ecosystems for multiple objectives.”

Michigan’s Upper Peninsula is home to a thriving timber industry and is an important breeding ground for many songbird species of conservation concern. Birds are particular about their neighborhoods — they have specific preferences for how open the forest canopy is and how high and sturdy branches are. If a forest changes considerably as it is harvested and regrows, the changes will affect how successful birds are at nesting and reproducing.

“Forests are coupled human and natural systems (CHANS),” said Jianguo “Jack” Liu, AgBioResearch scientist and holder of the Rachel Carson Chair in Ecological Sustainability. “Systems models like the one our team has developed are essential tools for stakeholders to understand the long-term dynamics and complexity of CHANS. Results from simulation experiments using our model lay a good foundation for achieving socioeconomic and ecological sustainability.”

The group engaged in a complicated birds-eye view of the forest, seeking to understand how four key songbirds — the black-throated green warbler, the eastern wood-pewee, the least flycatcher and the rose-breasted grosbeak — dealt with neighborhood upheaval.

Logging changes a forest’s composition, creating gaps in the canopy that can take years to fill. Currently the popular way of encouraging regeneration of hardwoods, called gap harvesting, isn’t always successful. Sometimes it appears that deer are eating the maple seedlings trying to grow in the sunny gaps left by harvest.

The four songbird species that the team picked all are fussy about their canopy. For example, the warbler likes its canopy dense with lots of branches about 50 feet high. The flycatcher, however, digs more open expanses.

“Essentially, for birds in these forests it’s the density of the regeneration of trees that become canopy dominants, such as sugar maple, that has the biggest effect on their future habitat,” said James Millington, a former post doctoral researcher at the MSU Center for Systems Integration and Sustainability (CSIS), who is now a Leverhulme Early Career Fellow at King's College in London, U.K. “These birds are picky about their overstory — and if regeneration is changing the forest now, in 100 years the canopy is going to be very different.”

In addition to Liu, Walters and Millington, study researchers are Megan Matonis, who recently received a master’s degree in forestry; Edward Laurent, a former CSIS doctoral student who is now science coordinator at the American Bird Conservancy; and Kimberly Hall, climate change scientist at The Nature Conservancy.

Funding for the study was provided by MSU AgBioResearch, the U.S. Department of Agriculture and the Michigan Department of Natural Resources.

The study results are reported online in the journal Forest Ecology and Management.