Dairy farmers in the United States are currently facing difficult times given persistently low milk prices over the last few years (Figure 1). Unable to remain profitable, some farmers have auctioned off their herds and/or found off-farm jobs. Unfortunately, dairy farm closures have become so common that dairy farm exits are no longer newsworthy. Michigan lost 380 milk cow herds from 2016 to July 2017 and an additional 149 herds from July 2017 to June 2018, resulting in 1351 registered herds in 2018.i Wisconsin lost 500 dairy farms in 2017 and more than 20% of its dairy farms in the last five years. These exits are somewhat reflected in dairy herd size. In April 2018, Michigan had 423 thousand milk cows, down from 426 thousand in April 2017.ii Minnesota and Wisconsin both had a reduction of 5,000 cows during the same period. Even so milk production continues to grow (Figure 1) as some farms have expanded to improve efficiency through scale economies.

The federal government can have a major impact on the agricultural industry as shown by biofuel legislation. However, the Margin Protection Program for Dairy Producers from the 2014 Farm Bill has not lived up to industry expectations. Rather than await the pending Farm Bill, Congress passed measures in February 2018 in an attempt to provide the industry with a more effective safety net. As Congress continues to debate and draft the new Farm Bill, we look at the views of over 650 dairy farmers in the three lake states of Michigan (116 respondents), Minnesota (166 respondents), and Wisconsin (379 respondents) who responded to a survey conducted in mid-2017.

About half of the respondents viewed the industry outlook as negative, but there were some differences by herd size and state

One question in the survey asked: “How would you assess the current business climate for milk production in your state?” Not surprisingly, overall views were not positive in all three states (Table 1). Michigan farmers were most negative with 65% of respondents answering they viewed the current business climate negatively, compared to 44% in Minnesota and 45% in Wisconsin.

If we look at the data in further detail, the negative sentiment was felt across herds of different sizes as shown by the last column of Table 2. Michigan farmers had the most negative views in all three herd size categories. In particular, Michigan farmers with medium-sized herds were considerably more negative (79%) than their peers elsewhere in the lake states. Among the 17 Michigan dairy farmers with herds greater than 500 cows, only one was upbeat about the dairy industry business climate. 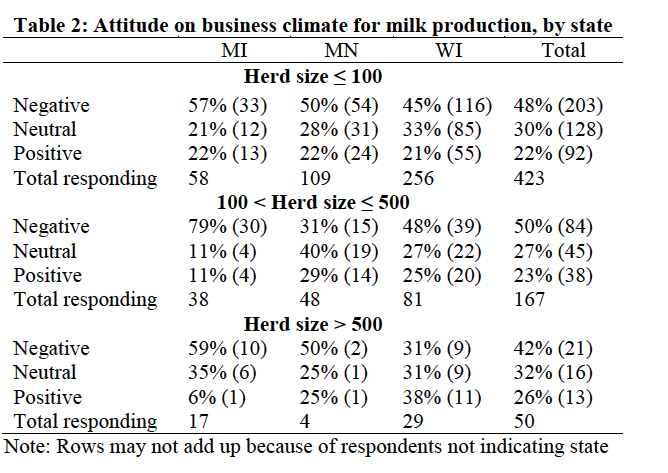 We asked farmers to declare their views on the single most pressing issue for the coming Farm Bill. Each respondent wrote an open response, which we then coded into categories.iii Category breakdowns are provided in Table 3 with the percent of respondents from each state mentioning the issue. Concerns are similar across states where low and unstable milk prices, as well as suggestions about how to manage these market outcomes, received most attention. Michigan dairy farmers made comparatively fewer statements than average about low or unstable milk prices but comparatively more about the need for an improved safety net and supply management or quota than producers in the other two states. Directly stated concerns about industry concentration and scale were also commonly provided as a pressing issue, but much less so in Michigan than in Wisconsin. A measure of disillusionment with the political process as it applies to the Farm Bill also emerged as a minor concern in all three states, as did labor and trade issues, regulations faced and ideas about growing demand for dairy products. 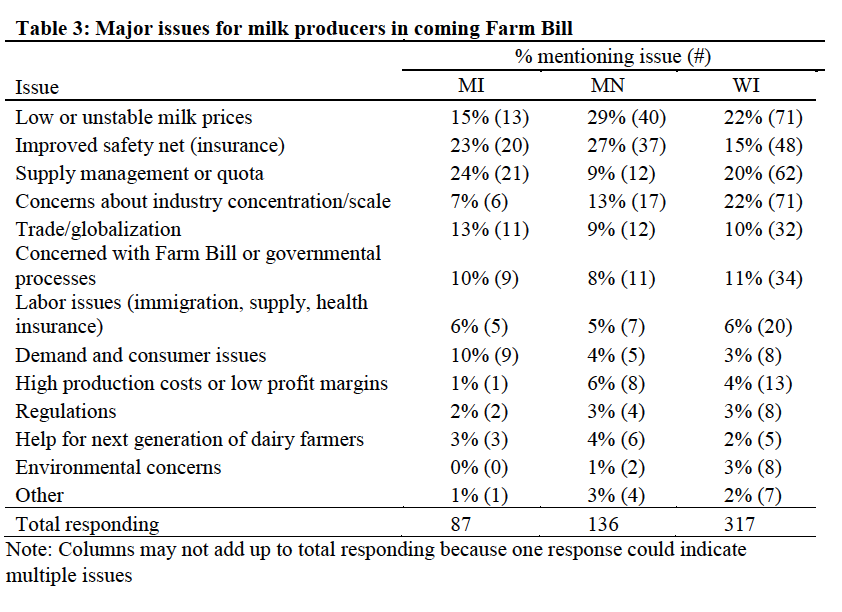 Michigan milk producers are among the nation’s most productive with production expanding almost uniformly for two decades. However in light of the current market situation, Michigan milk producers are generally not optimistic. Indeed, our survey suggests that Michigan dairy producers tend to be more negative about the dairy business climate than producers elsewhere in the Upper Midwest. This may be in part due to steeper milk price declines in Michigan compared with other states, arising from a current mismatch between supply and local processing capacity. In the last three years Michigan milk has sold at a discount of between $1.00/cwt and $2.10/cwt relative to Minnesota and Wisconsin (Figure 1). The state’s fundamental strengths in milk production have not disappeared, but industry structure will not be the same when the current shake-out runs its course.

Acknowledgements: This research was funded by the Elton R. Smith Endowment in agricultural and food Policy. The MSU team of researchers for this article include Hongli Feng, David A. Hennessy, Melissa G.S. McKendree, and Christopher A. Wolf. We appreciate the assistance of many colleagues at Michigan State University when designing the survey. Yanan Jia and Caroline Apley assisted in coding survey responses.