Michigan has established itself as a wine destination, and an MSU AgBioResearch scientist and other faculty members have played pivotal roles in the industry's growth.

Michigan has established itself as a wine d 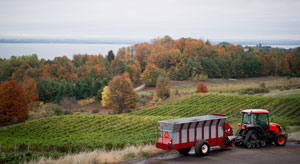 estination, and a Michigan State University (MSU) AgBioResearch scientist and other faculty members have played pivotal roles in the industry’s growth.

As Michigan’s leaves hit peak color, residents and tourists alike travel the state snapping photos of blazing trees and visiting the growing number of vineyards. Today, Michigan is ranked as the nation’s fourth-largest grape producer with a burgeoning industry of wine-grape growers and vineyards. As recently as the 1970s, the majority of the state’s vineyards were dedicated to juice-grape production.

That changed when G. Stanley Howell, MSU professor emeritus of horticulture and former AgBioResearch scientist, conducted successful trials with French/American hybrids and vinifera grapes and identified varieties that could thrive in Michigan’s cold climate. His work fueled the growth of Michigan’s wine industry and established MSU as a viticulture research institution.

With assistance from MSU, the state’s wine industry:

It was MSU’s reputation that enticed Paolo Sabbatini to leave Italy and come to Michigan to study. He has moved from student to teacher and is now an AgBioResearch scientist and an assistant professor of viticulture, as well as the statewide research and Extension viticulturist. He evaluates vine physiology under cool-climate conditions, environmental and cultural factors that limit vine growth, vine yield, canopy management and grape varieties.

Another way that Sabbatini and MSU are helping fuel the industry’s growth is by educating future viticulturists. Through the Department of Horticulture and MSU Extension, students gain classroom and field experience in the literal sense. A typical day during the fall harvest or the winter pruning involves driving to MSU’s vineyards in southwestern or northwestern Michigan – rain, snow or sun – and spending the day snipping clusters of grapes or trimming vines, respectively.

The work isn’t over when the bell rings, either -- it’s when the fieldwork is complete. In fact, it’s these days that demonstrate students’ commitment to viticulture, Sabbatini said.

“There’s a romantic notion about being a wine connoisseur that draws some people to viticulture,” he said. “So I invite them to work the harvest, which can be 12-hour days. If they come after the first day, then I know that they are serious, and they want to be part of the program.”

Working outdoors and helping cultivate an important crop for his home state is what drew Jake Emling, an undergraduate student from Gladstone, to the program. His studies have allowed him to intern at Old Mission Peninsula’s Chateau Chantal as well as travel to southern France to learn more about plant physiology.

“I’ve always wanted to work in plant science, but I didn’t want to spend the majority of my time in a lab and sitting at a bench,” he said. “Growing up in the U.P., I was always outside. I got bitten by the wine bug at Michigan State, and the viticulture program allows me to exercise my science background but work hard outside.”

More information is available through MSU’s viticulture program and the Michigan Grape and Wine Industry Council.

To view a video of Michigan’s transformation into a wine destination, visit http://www.youtube.com/watch?v=n7pPx3CjaP8&feature=player_embedded.