Halloween and Thanksgiving wouldn’t be the same without Jack-O-Lanterns or pumpkin pie, but demand now extends from September through November for decorative types. Producing quality pumpkins during this time can be challenging.

Pumpkins have become a significant seasonal crop worth $150 million harvested from 50,000 acres. Forty years ago, pumpkins seemingly had few disease and insect problems. It was pretty simple to just plant, fertilize, cultivate a few times and wait until harvest, but that has changed. Several insects and diseases now damage plants and fruit, and growers have to take protective action if they are to have economic yields.

One of the significant foliar diseases pumpkin and fall squash producers face is powdery mildew (Podosphaerafuliginea) (Photo 1). If uncontrolled, powdery mildew can lead to significant early defoliation (Photo 2), reducing fruit size and contributing to substantial fruit damage due to sun burning exposed fruit. Powdery mildew becomes more of a problem when plants begin to experience extended periods of leaf wetness usually associated with heavy dew events starting in mid-August, but also at other times during the growing season. 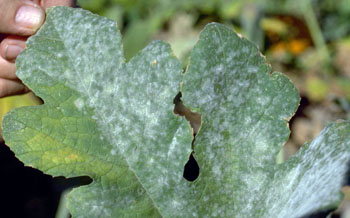 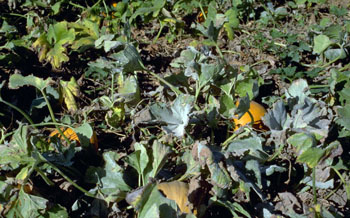 Powdery mildew also attacks fruit handles (Photo 3), drying them up and producing a Jack-O-Lantern without a handle. 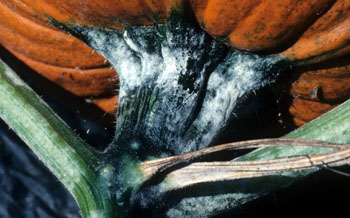 To minimize powdery mildew exposure, growers would often delay planting until mid- to late June. The problem with this late date is that plants would often come into flower during the heat of the summer when bees are not as active and flowers are not open very long. Also, aphid populations are high and plants can quickly become infected with viruses, deforming fruit and making it unmarketable. Further, the current market is also demanding pumpkins earlier in the season, with customers purchasing them as general fall decorations from September through November.

The first step in reducing powdery mildew losses is to select cultivars with powdery mildew tolerance. Several commercially available cultivars are available across a wide range for fruit sizes and types (see list below).The level of genetic tolerance is not enough, however, to completely control powdery mildew. Fortunately, several fungicides (Table 1) now exist that, when applied properly, give satisfactory powdery mildew control. The fungicides listed are those currently recommended as giving the best control according to Michigan State University Extension Bulletin E0312, “2014 Insect, Disease, and Nematode Control for Commercial Vegetables.”

Current pumpkin cultivars reported to have some tolerance to powdery mildew. Note: This is not an exhaustive list.

Table 1. Fungicides recommended in MSU Extension Bulletin E0312 for powdery mildew control on pumpkins. Note: Other products can be used for control. These products are currently recommended for problem infections.

Using these cultivars and control products makes it possible to plant earlier, which contributes to improved fruit set by bringing peak flowering time into a cooler part of the season. Marketable fruit is also increased since fruit is set and begins to develop prior to virus infection. Fruit forming prior to infection will not be deformed since virus symptoms only appear on newly developing tissue. More information on powdery mildew can be found at “Powdery Mildew on Pumpkin/Watermelon.”

Watch for Phytophthora on vine crops