Variable rate fertilizer application and soil mapping—once at the cutting edge—have gone mainstream. Newly released results from a 2017 survey of corn and soybean growers in the Eastern Corn Belt reveal how trends in precision agricultural technology adoption are playing out in Michigan and neighboring states.

Soil mapping is the #1 precision technology. Over 75% of farmers now use it in Michigan, Illinois, Indiana, and Ohio (see first chart). Phosphorus (P) and potassium (K) tend to stay put, so investments in soil tests and variable rate application maps for P and K can last several years.

These two nutrients are the ones most widely applied at variable rates. Both nutrients are critically important, but both also have become abundant, especially in fields where manure is applied. So variable rate phosphorus and potassium application appeals because it can cut fertilizer bills where added nutrients are not needed. 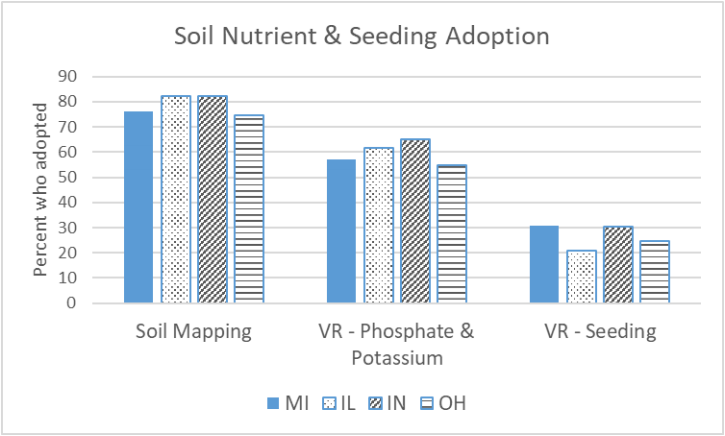 Scouting for pest problems has become the norm across the Eastern Corn Belt. Over two-thirds of farmers reported scouting and comparing what they found to threshold recommendations for management (see second chart). During the 2017 season, aerial scouting was used by 18-29% of growers in the region. 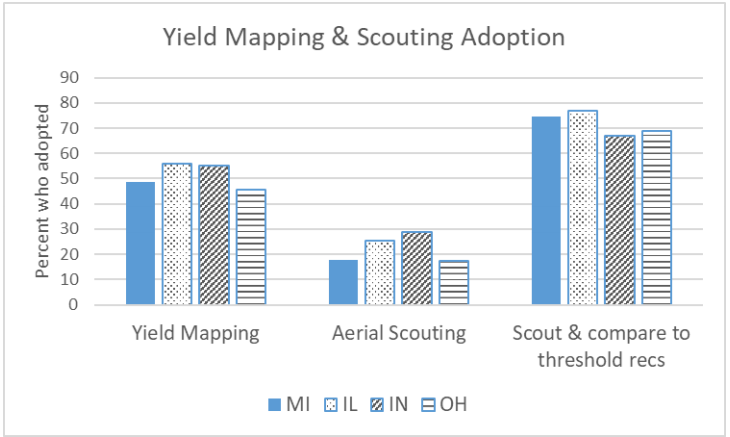 Michigan stands out in N management

Michigan farmers stand out when it comes to nitrogen (N) management. A quarter of corn growers in Michigan use pre-sidedress nitrate tests, much more than in neighboring states (see third chart). Michigan growers are also keener to apply N at variable rates and to use foliar fertilizers. What makes Michigan different? We’re not sure, but one reason could be the Michigan Agricultural Environmental Assurance Program (MAEAP), which encourages nitrogen testing as a best management practice for both crop and livestock farmers. 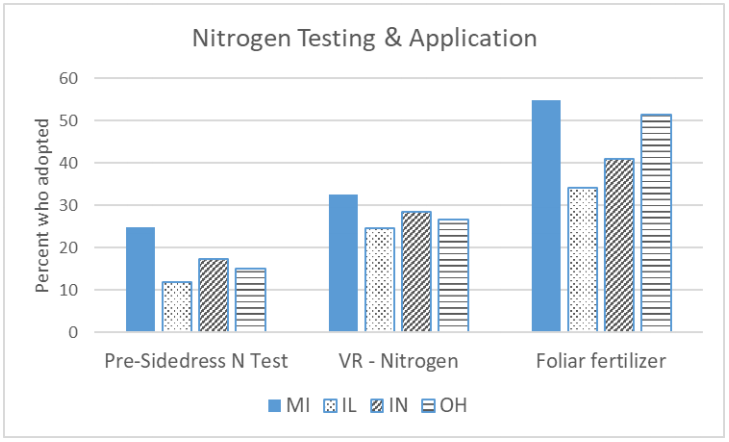 At the national level, precision agriculture use surged among corn and soybean farmers 2010 and 2016, according to two recent reports by the USDA Economic Research Service (ERS)1 . High corn and soybean prices in 2008-13 led to a boom in new equipment purchases. Between 20010 and 2016, adoption of soil mapping leaped from 20 to 75%, variable rate fertilization jumped from 20 to 60%, and yield mapping grew from 30 to 50%. The latest ERS report finds guidance systems for tractors and combines had spread to 65% of surveyed corn operations by 2016.

Larger farms adopt precision agricultural technologies most eagerly, according both to the MSU study of the Eastern Corn Belt and to the national studies by the ERS. Our MSU research found that growers who value being leaders in their industry tend to be quicker to adopt precision ag practices. Livestock farmers are less prone than crop farmers to invest in precision crop and soil management technologies.

For background, the Eastern Corn Belt results here came from the MSU Crop Management and Stewardship Practices survey of 2017. That survey went out to over 10,000 farmers who planted at least 100 acres of corn or soybean. It targeted farms in counties where those crops covered at least 15% of the land area in Michigan, Illinois, Indiana, and Ohio. The survey received a 31% response rate. The survey oversampled larger farms, so results here are more representative of farms over 500 acres. The survey research was funded by the National Science Foundation (through the KBS-LTER project) and Michigan AgBioResearch