Some cool bugs are out and about

Apparently the week of June 22 is “Cool Bug Week” because we got some dandies in the lab. Jeanne (don’t know her last name) sent me a great photo of a Cecropia moth that she was trying to identify.  The Cecropia moth is one of our most spectacular moths. The larvae feed on various broadleaf trees and shrubs. The caterpillar is equally, if not more impressive. 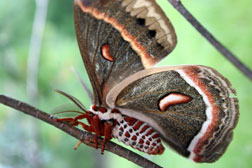 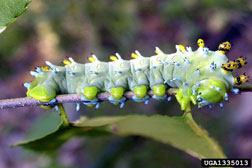 For those of us who prefer the larval
stages of cute bugs, here's what a
Cecropia moth caterpillar looks like.
Photo credit: J. Ghent, USDA Forest Service. Courtesy of
forestryimages.org 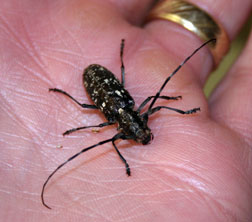 I got a call from a concerned citizen saying he found Asian longhorned beetles up by Ludington last weekend, which made me think that our native Whitespotted pine sawyer, Monochamus scutellatus beetles have emerged. And sure enough, we got a very nice specimen from Norm Myers, the CED up in Oceana County.

The genus Monochamus is represented by several wood-boring beetle species in the eastern United States, all of which feed on various conifers. The most common species in our area are M. scutellatus and the northeastern sawyer, M. notatus. The larvae are known as "sawyers" because of the loud noise they make while feeding. Freshly cut, felled, dying or recently dead trees are preferred. Young larvae feed on the inner bark, cambium and outer sapwood, forming shallow excavations called surface galleries that they fill with coarse, fibrous borings and frass (insect excrement). As they grow older, they bore deep into the heartwood, and then turn around and bore back toward the surface, thereby forming a characteristic U-shaped tunnel. A pupal cell is formed at the outer end of the tunnel, from which the adult emerges by chewing through the remaining wood and bark. Eggs are laid in slits or niches chewed in the bark, preferably near old branch scars or in wrinkled areas on logs. Full-grown larvae are often close to two inches long.

Two years are required to complete the life cycle in the Lake States and southern Canada. Members of the genus often cause heavy losses in wind-thrown or fire-killed timber, in saw logs left too long in the woods or left too long with the bark on before milling, and in improperly handled pulpwood. Adult beetles are vectors of Pinewood nematode.

Norm also sent us an eyed click beetle or eyed elator, Alaus oculatus. This is another very handsome beetle and is our largest member of the click beetle family, Elateridae. Its common name comes from the two large eye-spots on the pronotum. The larvae, which may reach nearly two inches in length, live in moist, decayed wood, especially stumps. The larvae are predaceous on other insects. These handsome beetles are harmless. 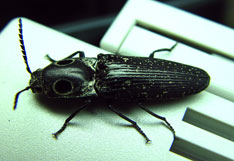 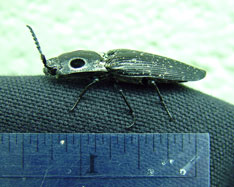 An eyed elator beetle next to a ruler.
This is a good sized bug.
Photo credit: H. Russell, MSU  Diagnostic Services

Firewise landscaping can save homes from wildfire

Bring a bit of spring indoors during the winter

Controlling wasps in yards and structures