Where have all the fish gone? Studying walleye population challenges in Michigan's inland waterways

Through the efforts of MSU AgBioResearch fisheries scientist Daniel Hayes and his team, the MDNR and tribal fisheries managers are making more informed decisions to help walleye recover.

Valued for their large size and excellent flavor, walleye rank as one of the most popular species of fish in Michigan. Measuring 15 to 24 inches and weighing 2 to 4 pounds, adults are also considered an important predator in the state’s freshwater ecosystem.

In 2009, the Michigan Department of Natural Resources (MDNR) discovered that walleye in the Inland Waterway — a 45-mile long network of four lakes and multiple rivers spanning private, public and Native American tribal land in Cheboygan County — had greatly diminished since they were last surveyed in 1998. Returning the walleye population to a more sustainable level has become a priority because of their importance to commercial, sport and tribal fishing in the area. Now, through the efforts of Michigan State University (MSU) AgBioResearch fisheries scientist Daniel Hayes and his team, the MDNR and tribal fisheries managers are making more informed decisions to help the fish recover.

“Walleye are large, very mobile predators that often travel between aquatic environments,” said Hayes, a professor in the MSU Department of Fisheries and Wildlife. “It’s important, both as ecologists and fishery managers, to know where fish          originate and where they travel. That tells us where they’re living, getting their food and reproducing, as well as the threats that they face.”

Learning about the movements of the fish was the first priority for Hayes and his team. Beginning in 2010, a succession of MSU graduate students worked alongside MDNR and tribal biologists to catch walleye in their spring spawning grounds. Each fish then had a metal tag inserted into its jaw that had a unique identifi r code, along with information on where and when it was collected.

When local anglers and tribal fishermen caught the fish they would turn the tags in to the MDNR. By looking at the distance between where a fish was caught and where it was tagged, researchers were able to determine the path and the environments the fish had passed through. Though most walleye are born in the rivers that feed the Inland Waterway, Hayes and his team found that over 80 percent of adults move into the lakes during the summer and travel widely throughout the entire system.

“Tagging tells us a lot about where fish go and how much they are harvested,” Hayes explained. “Say we release 1,000 tagged fi in a season — if we get 500 tags back from fishermen, then we get a pretty solid picture of not only the percentage of the population caught but also of how far the fish travel within the waterway.”

On the basis of stomach contents and tissue samples of the fish caught, Hayes and his team found that nutrition levels varied significantly depending on their travels.

“It’s based around the idea that ‘you are what you eat,’” Hayes said. “Fish feeding in different locations have different isotopes of nitrogen and carbon in their bodies, so what they eat can tell us a lot about where they’ve been.” 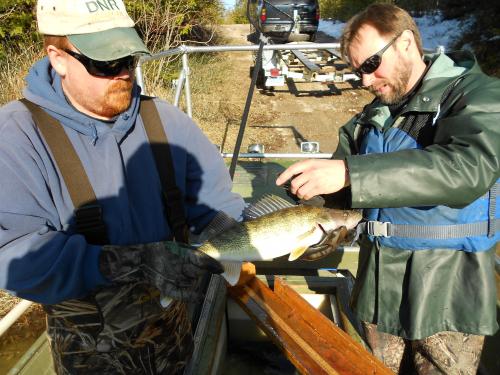 No population study is complete, however, without future projections. Focusing on the streams feeding Mullett Lake, where the initial survey was taken, Hayes and his team used fine mesh nets to collect larval walleye from their hatching grounds. By studying environmental conditions such as food availability, Hayes was able to characterize the factors affecting mortality in young walleye.

During infancy, walleye are a far cry from the apex predator they become in adulthood.

They measure about an inch in length and feed exclusively on microscopic organisms called zooplankton. Adult walleye lay thousands of eggs, but the vast majority of larvae die from lack of nutrition or fall prey to other aquatic species. Hayes discovered that a shortage of zooplankton in the Inland Waterway, escalated by invasive species such as zebra mussels that compete for the same resources, was limiting the population’s growth.

“When you compare a juvenile walleye to an adult, it’s almost like looking at two different organisms,” Hayes said. “They don’t eat the same things. They don’t have the same predators. They’re vastly different.”

“That’s like a human child growing an inch every day throughout the summer,” he said.

Hayes and his students used a statistical technique called Bayesian analysis, a complex mathematical procedure that reduces uncertainty in a statistical model by comparing past and present datasets. The result was a dynamic overview of the factors affecting the growth of the walleye population in the Inland Waterway. With a more complete picture of their fishery in hand, both the MDNR and the tribes are now able to make better decisions about the use of their shared resource.

“This affects how we view the management of the entire system,” Hayes said. “How we view fish stocking, harvest limits, the threat posed by invasive species. We have a far better understanding of how the fish live and the struggles they face, and we can more effectively manage them as a result.”

Beyond resource management, the findings have helped nearby waterway residents develop a deeper appreciation of the lakes and rivers.

“As we’ve worked with citizens’ groups in the area, we’ve encountered a number of people who may not be affected directly by the fishery but who still find value in the research,” Hayes said. “We’re helping them better understand the place they live. That’s a social impact that you won’t see on a graph or database.”