More and more researchers are looking at biochar — an ancient practice — to remediate soil by removing contaminants, including pharmaceuticals and antibiotics.

Terra preta is a Portuguese term meaning “black earth” or “black land.” It describes the dark, fertile soil of high charcoal content found in the Amazon Basin dating back to 450 B.C. Mixing charred pottery, bone and crop residue is believed to have helped transform the infertile, sandy soil of central South America into a lush, productive region. Although long discontinued, the ancient practice is captivating the attention of modern-day scientists. They are particularly interested in the char, or biochar, that gives terra preta its darkness. The fine, carbon-rich, porous material is made from organic matter through a heating process that is more akin to smoldering than burning.

Today, biochar is created as a biofuel byproduct and as a result of wildfires. It is also being manufactured from various types of agricultural waste such as corn husks, wood and even manure in low-oxygen chambers at temperatures ranging from 300 to 600 degrees F. Di?fferent production techniques equate to di?fferent end results, providing an added layer of complexity. Wei Zhang, a Michigan State University (MSU) assistant professor with the Department of Plant, Soil and Microbial Sciences, specializes in soil remediation and has been studying biochar for more than five years. He is involved in several studies on biochar, from evaluating various production processes to examining contaminant immobilization and even the leaching of biochar particles in soils. Zhang said there still remains much to learn about biochar, especially about how these particles move through and interact with the soil through chemical, physical and biological processes. 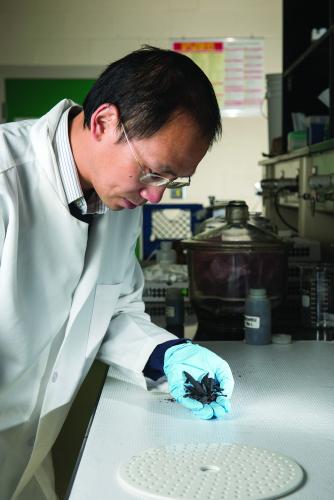 “The reason the people of the Amazon benefited from biochar was not by coincidence,” said the MSU AgBioResearch soil physicist. “It was the right place and the right soil for this kind of amendment. That being said, not all biochar is created equal. There have been occasions when people today have applied the wrong biochar at the wrong place with negative outcomes.”

Zhang is among a team of scientists led by Johannes Lehmann, a crop and soil scientist from Cornell University, working to develop a production model for biochar. In the article titled “Reverse engineering of biochar” published in Bioresource Technology by lead author Verónica L. Morales (now a soil and environmental scientist at ETH Zurich), researchers stated that the type of starting biomass and the temperature at which the product is made are the two most important production factors.

Although plenty of unknowns remain about why and how it works, biochar sales have tripled since 2008, according to some estimates. And interest from the agriculture community continues to increase. At the request of growers, MSU horticulture professor Eric Hanson gave a presentation on biochar during the 2014 Great Lakes Fruit and Vegetable Expo last December. He told the audience that the subject is a fairly new area of study for him.

“One paper on biochar looked at 23 studies — although none on blueberries — and showed an average benefit of 10 percent yield increase,” Hanson said. “The author attributed this benefit to change in soil pH and its water-holding capacity.”

Last fall, Hanson started a biochar trial with Michigan blueberry growers on two farms. He plans to see for himself if there are potential benefits. Blueberry plants are slow-growing and take years to establish, so growers are hesitant to replace old plants with improved types. Hanson said biochar may help shorten the establishment period. Chemical characteristics of biochar depend on the type of raw material, or parent biomass, used in the production process. Hanson reported that those made from wood tend to have pH levels from 5.0 to 7.0, and are low in salts and nutrient content, relatively high in sorption ability and less prone to leaching than most other biochars. On the other hand, he said biochar from manure tends to have high pH (as high as 11.0) and can contain high levels of total salts, as well as plant nutrients such as potassium, calcium and magnesium. Zhang said there appears to be some preliminary agreement on biochar from the scientific community.

“Biochar is typically best for acidic soil and also coarse-textured soil such as sandy soils,” Zhang said. “The reason is that when you produce biochar at high temperature, like 600 degrees, it typically has an alkaline nature. This creates a liming e?ffect when added to acidic soils. When dealing with coarse, sandy soil, adding biochar can help the water- and nutrient-holding capacities. That’s one example of applying the right biochar at the right place.”

MSU AgBioResearch soil contaminant remediation experts Stephen Boyd, Brian Teppen and Hui Li are looking at the use of biochar to help sequester and remove dioxins and other contaminants from hazardous waste sites known as Superfund sites across the United States. It is a new phase of an ongoing $18 million project funded by the National Institutes of Health.

“The bottom line is to use chars or some other sorbent amendment to reduce the bioavailability of chemicals that occur as contaminants in soils and sediments,” Boyd said. “This reduces risks associated with these contaminants and may let us safely relax clean-up criteria. This might allow, for example, more contaminated sites to be remediated using the limited funds available.”

In a separate study, Zhang’s graduate student Cheng-Hua Liu is examining biochar made from bull, dairy cattle and poultry manures produced at 600 degrees F for sequestration of antibiotics. The heat destroys any antibiotics in the manure, which, when later applied to the soil, could immobilize antibiotics already present. It is estimated that about 70 percent of antibiotics produced are used in animal agriculture.

“We believe this is an innovative approach because you’re reducing the antibiotic load to the environment while also dealing with the legacy problems of antibiotics that have been there a while,” he said. “If we are able to generate antibiotic-free, manure-derived biochar and place it in the field to alleviate the presence of legacy antibiotics, we could really be onto something.”

This work is part of a USDA-funded project for Zhang, Boyd, Teppen and Li to study the movement of antibiotics as influenced by biochar soil amendment. Zhang has also found that biochar can absorb antibiotics from water with very little re-release back into the environment.

“Once you reduce the availability of antibiotics to bacteria in the environment by sequestration, you will decrease the selection process for generating antibiotic resistance in bacteria,” he said. “That has huge implications on human health.”

In an experiment conducted sheerly out of curiosity, one MSU researcher said he grew soybean plants in various types of soil mixed with biochar, including one that was completely biochar. The plants grew for 60 days in a greenhouse last fall. Afterwards, he weighed the roots of each of the plants and discovered that the one grown in 100 percent biochar outweighed the smallest by 4.5 times. 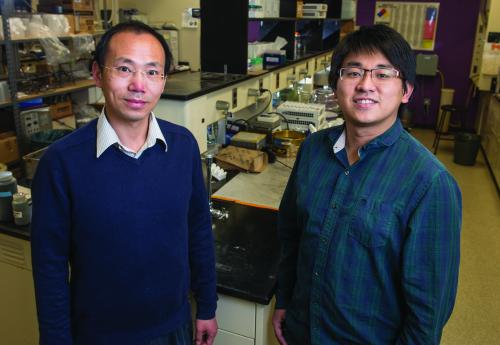 But despite some positive reports, challenges do remain. Use of biochar has had mixed results on agricultural yields. And there is concern over potential pollutants from the production process. In an e?ffort to learn more about biochar, MSU AgBioResearch and the Environmental Science and Policy Program formed a special team of scientists to study black carbon in the environment. Some studies have shown that about 10 percent of dissolved organic carbon in surface water is from black carbon, and a significant fraction also exists in the soil. In some U.S. regions, burning of crop residue such as sugarcane in the field is still allowed.

In many other parts of the world, this is a regular practice, and some concern has been voiced over potential air pollution. Biochar also comes with high production costs, so benefits must outweigh those.

“We really need to do a better job of protecting our soil resources,” Zhang said. “Once they are contaminated, it is really diffi?cult and extremely expensive to clean up. Any society that didn’t protect its soils eventually failed. You can look back on history and see many examples of how that happened.”

With its natural ability to retain nutrients and water and sequester contaminants, biochar appears to hold promise. But researchers caution there is still much to learn about this practice largely abandoned thousands of years ago.