Local government should encourage urban agriculture. But there needs to be proper safeguards and a consensus to balance agriculture activities without undesired impacts in the neighborhood.

A new publication is now available to assist local governments prepare zoning regulations for agricultural activities in urban, suburban, urbanish areas. The Land Use Series: “Sample zoning for agriculture-like and urban agriculture” has been published and available for download at this webpage. This Michigan State University Extension publication was a collaborative effort by over a dozen experts from MSU and MSU Extension in government and public policy, agriculture, community food systems, as well as assistance from municipal attorneys who volunteered their time to this effort.

This Land Use Series publication is to present a starting point for what aspects of agriculture can be regulated by local government. In the document is a sample zoning ordinance text amendment to be used to accommodate urban agriculture, agriculture in category 4 sites (as defined in the Site Selection GAAMP), in communities of over 100,000 population, and agriculture-like land uses.

It is anticipated that for any one community, the sample will appear to be overwritten. It is. The intent was to write it for use in large cities and rural townships covering all those bases. Intent is for a local government using the document to edit (mainly deleting) to craft a proposed zoning amendment for its own use.

This topic is relatively new to Michigan with likely changing law and improved science. To reflect those changes, the publication is labeled “draft”. That is to reflect that it will be regularly updated and changed. The user might want to bookmark the webpage where it is found so one can obtain the most recent version, rather than file a paper copy of the document. 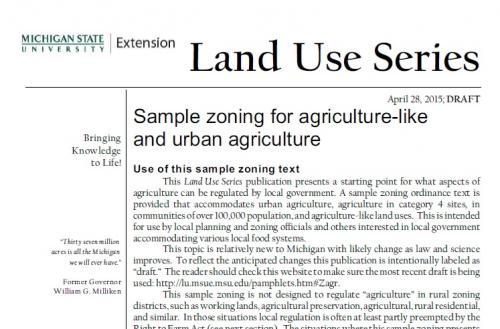 The sample zoning is designed to be used in the following situations. It is not designed to regulate “agriculture” in rural zoning districts, such as working lands, agricultural preservation, agricultural, rural residential, and similar. In those situations, local regulation is often at least partly preempted by the Right to Farm Act (see the “prologue” article listed at the bottom of this article). The situations where this sample zoning presents a starting point for local regulation are these:

Allowing agriculture in urban, suburban and urbanish settings can be an important new economic niche for a community. It is important for every local government in Michigan to give serious consideration to this, as well as how it fits with local foods, and similar interests which are growing in popularity and importance. This publication also presents suggestions for whom to involve in such discussions and how to achieve consensus in the task of balancing local food interests and neighbor’s concerns about such activates near them.

What became clear in the process of researching and writing this publication are the very important precautions and concerns that should be in place for these land uses. For example, one MSU professor helping with this project indicted “backyard poultry (chicken) operations shall not be located within four miles of an existing agricultural commercial poultry operation.” While the four mile isolation may seem excessive, it is very important for the protection of a commercial poultry operation from spread of disease (e.g., avian influenza) and biosecurity where a backyard flock is the source of a disease event.

Agriculture, even in urban settings, has pollution potential (from organic or inorganic chemicals, manure, fertilizers and so on). In rural settings agriculture following generally accepted agricultural management practices (GAAMPs) and having distances and large land areas as buffers can often effectively manage these concerns. But in an urban setting, it can raise additional concerns. For example often sewage treatment plants are not designed to handle such pollution, or not able to handle the anticipated quantity. The same concerns can be extended to storm sewer systems, storm and sanitary sewer systems which are not separated from each other, and wellhead protection areas. Thus, local concerns should focus around how this aspect of agriculture is handled. But our experience watching communities’ work on this is often overlooked issues such as this one. Not to do so could result in serious problems with environmental laws governing sewage treatment, drinking water and non-point pollution.

The sample zoning is full of these types of issues – all designed to prompt local government to think about them, see the recommended solutions, and help local government determine which types of agriculture can be allowed, where, and which regulations are appropriate. Obviously one does not just take the sample zoning text and adopt it. It first takes careful review, discussion and making public policy decisions.

The publication is 30 pages, outlined as follows;

Not all public participation events are charrettes