AFRE professor Chris Wolf gives an update on the status and trends of land values in Michigan.

Michigan State University has collected information on land values since 1991 using a mail survey of appraisers, lenders and others involved in Michigan agriculture. The goal of the MSU study is to provide information on the value of land based on agricultural and non-agricultural uses.  The survey questionnaire was mailed in May with responses coming in through July 2018.  A total of 157 responses were received. Respondents were asked to provide current agricultural-use value of the farmland, expected change in value during the next year, and cash rental rate for their geographic area. Estimates on agricultural-use values for farmland were reported separately for tiled (non-irrigated) field crops, non-tiled field crops, fruit, sugar beets, and irrigated land.  Price data on non-agricultural use land values were collected for residential, commercial, and recreational development. 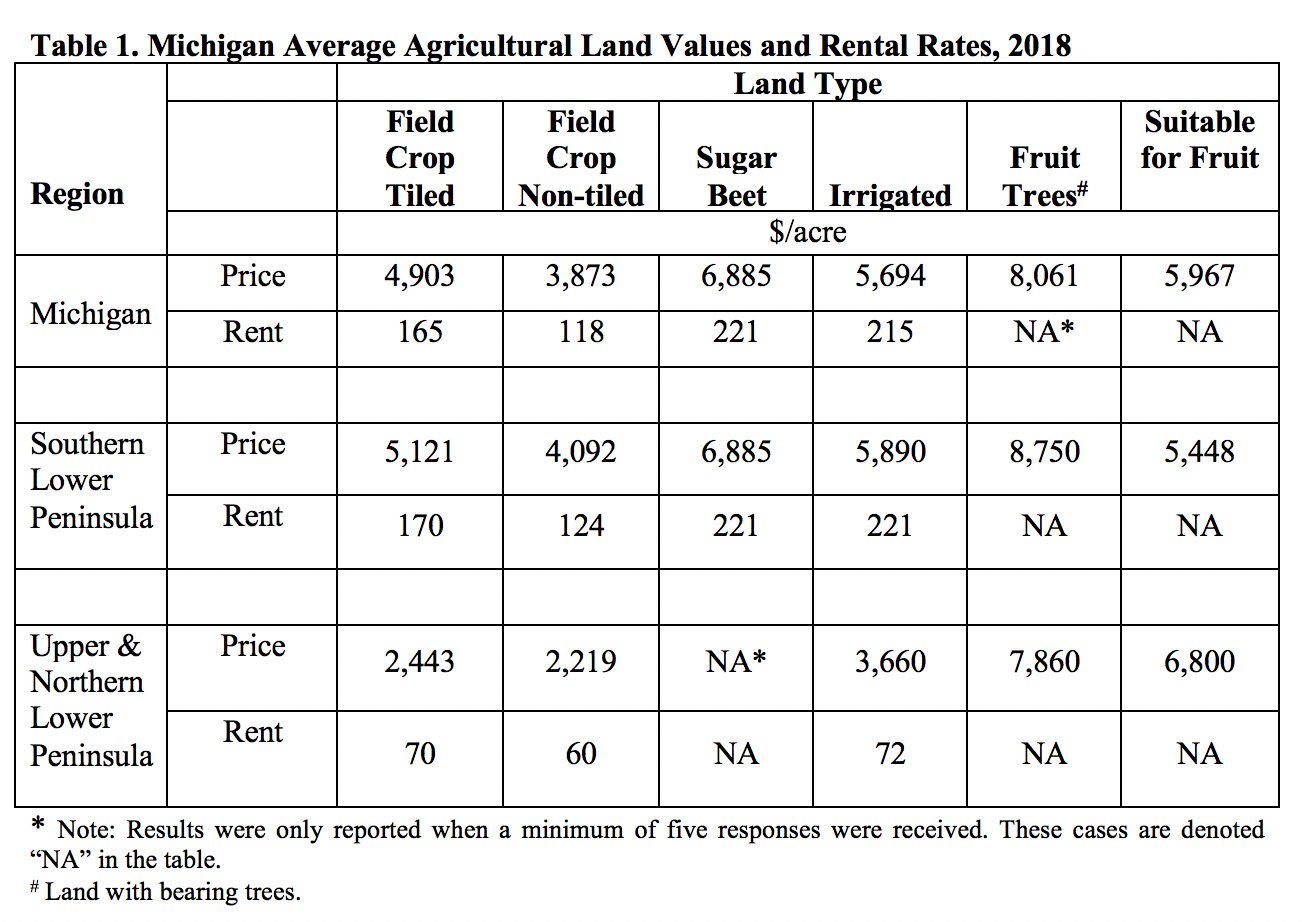 With respect to land rental rates, tiled field cropland averages $165 per acre in cash rent.  Irrigated and sugar beet land rented for $220 and $215 per acre, respectively.   Land rent in the Upper and Northern Lower Peninsula was considerably lower on average at $70 per acre for tiled land and $60 per acre for non-tiled crop land.

Figure 1 displays the trend in average per acre price of land for Southern Michigan from 1998 through 2018.  In general, the land prices have consistently increased in price when inflation is not considered.  The average values trended upward at an increased rate from 2012 to 2015 but had adjusted downward in 2016 and 2017 before an increase in 2018. 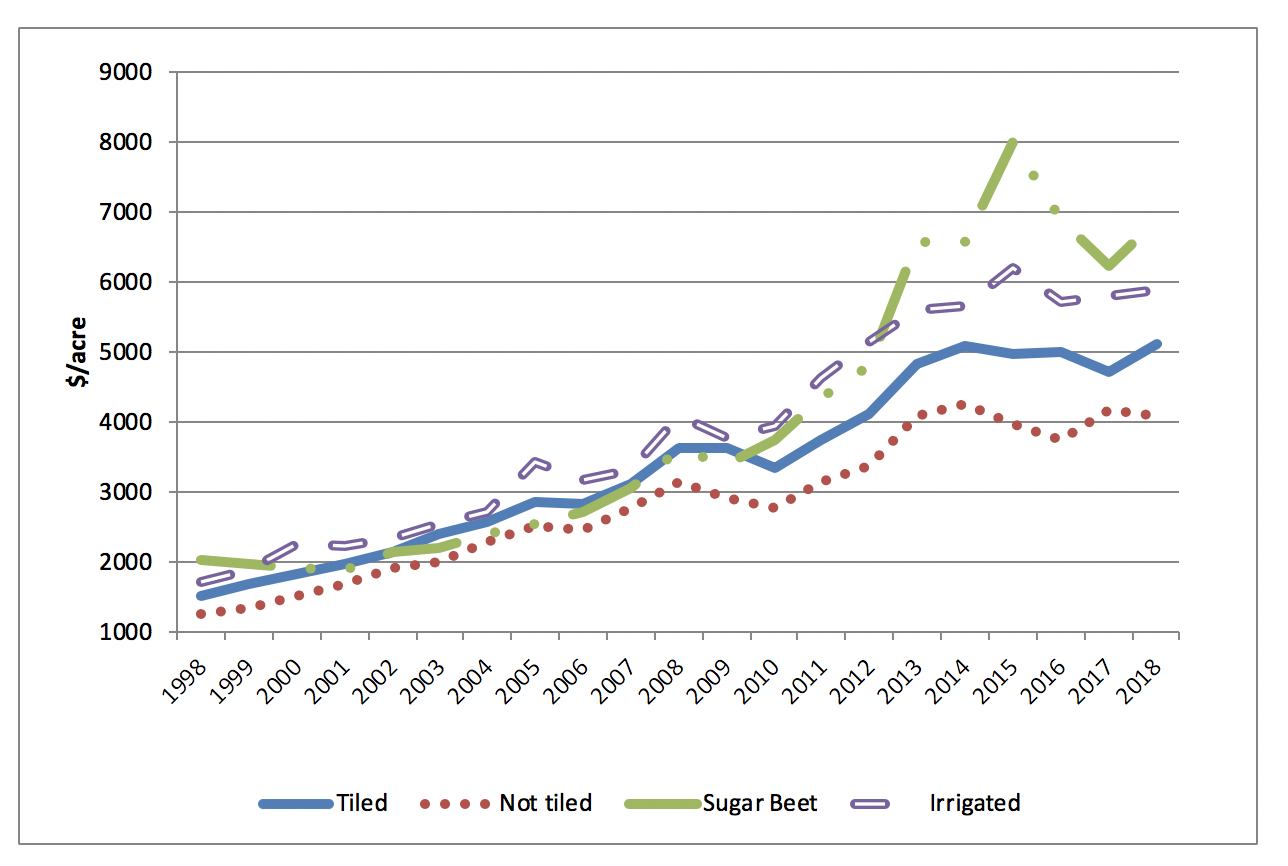 Figure 2 displays the average land price and rental rate for tiled field cropland in the southern lower peninsula of Michigan from 1991 through 2014. From 1992 through 2018, Michigan farmland value increased at an average rate of 6.5 percent. Agricultural land price and rents move together over that time period with a correlation between the two series of 97 percent. 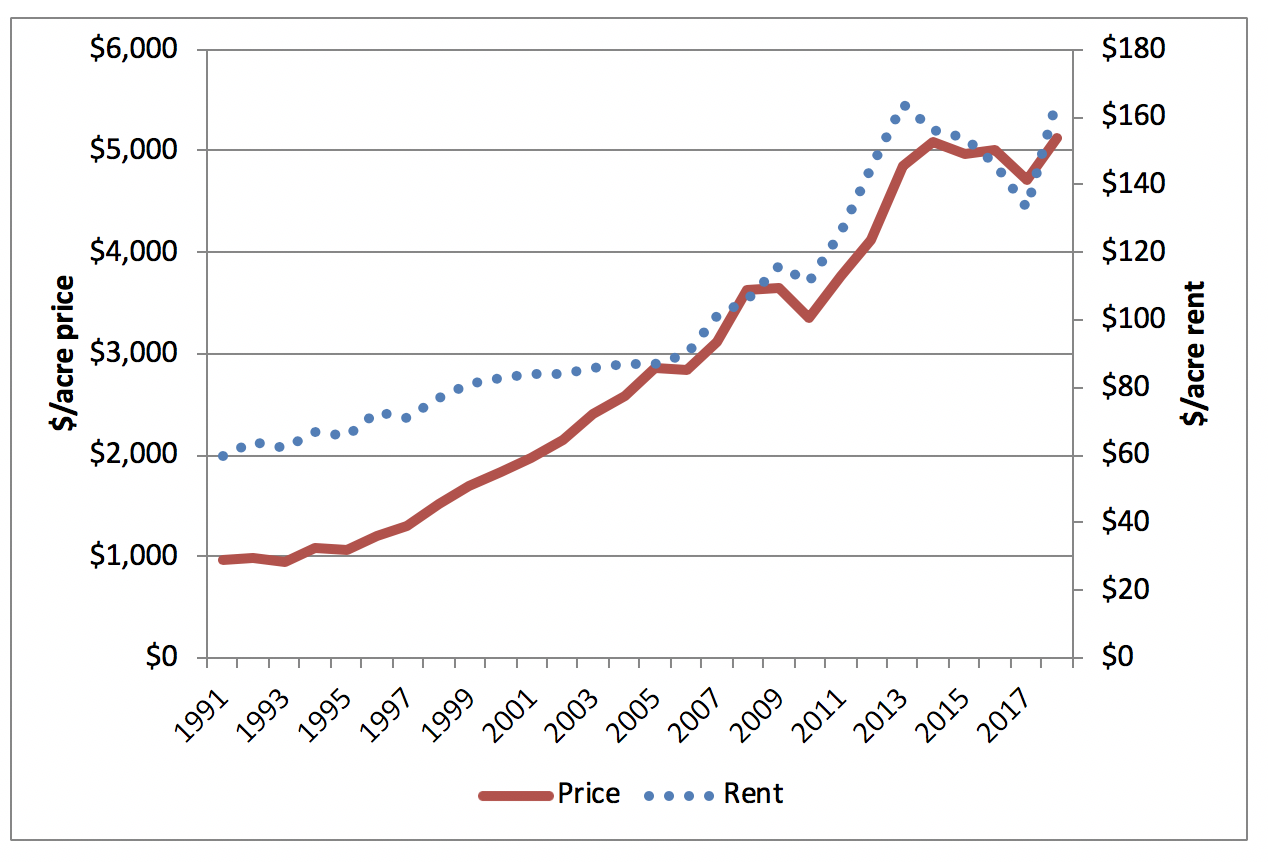 The survey also solicited opinions about factors driving land values. Respondents were provided the opportunity to indicate their perception of the importance of agricultural-related factors that influenced farmland values and cash rents.  For the state and all districts in Michigan, expansion by farmers, grain prices and milk price were the highest-ranked agricultural factors influencing land prices.  The most important non-agricultural factors influencing land values were interest rates, home sites, and small farms.  This pattern was consistent across districts although hunting and water access were also important particularly in the Upper and Northern Lower Peninsula.

The full report is available online.