Beginning in 1995, a group of scientists at Michigan State University set out to answer how orchard floor management could affect other horticultural practices, soil quality, and pest management in newly planted and established tart cherry orchards. Tart cherry growers and industry representatives provided consultation for the work through the Northwest Michigan Integrated Fruit Systems Think Tank.

Orchards are grown on many soil types and under different weather conditions. These factors, market demands, and a host of other considerations must be weighed when determining the best orchard floor and nutrient management options for a particular farm. Furthermore, many practices have both advantages and disadvantages; there is no ”best” system that can meet all objectives. We hope that this research helps growers consider various management options and weigh some of the trade-offs associated with selected practices. 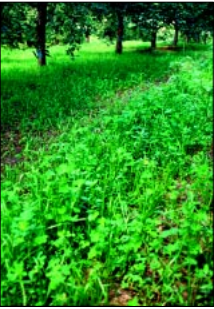 How did the different systems affect yield?

1) Two-spotted mite populations were higher than all treatments with broad-leafed plants growing under the trees. But even with more mites, the trees produced heavier yields.

2) Cherries were softer in two of the seven years.

3) The system can be expensive if mulch is not obtained free of charge. Even at $1 per small bale (a value equal to cost of standing hay free for the harvesting), costs exceeded all other systems. 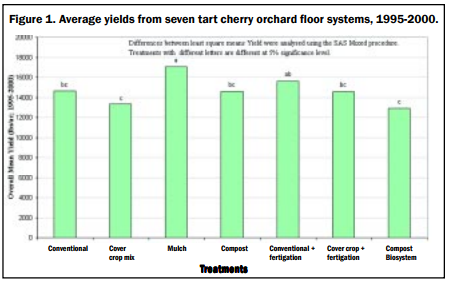 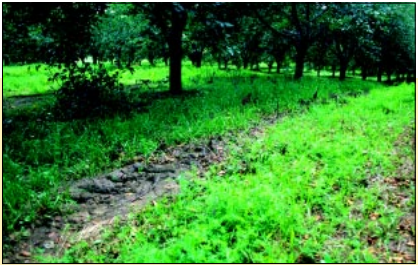 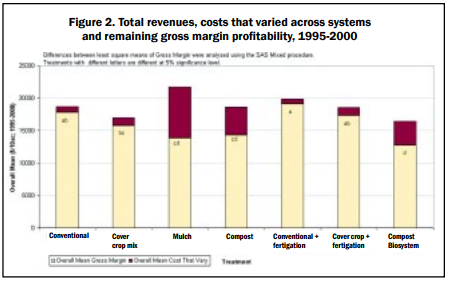 What was most profitable?

The three most profitable systems included two fertigation treatments, plus the Conventional treatment.

Above, Figure 2 shows how high costs (dark color) knocked the high-yielding mulch and compost systems off the profitability pedestal in favor of the lower cost systems.

While growth and yield may present the most compelling reasons for adopting new management strategies, profitability also takes into account the cost of inputs necessary to implement each orchard floor management system. 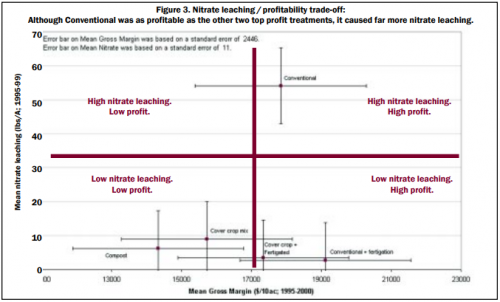 Under Northwest Michigan conditions, most total N leaching occured from October through April. Low soil moisture during the summer minimized leaching potential. The conventional and cover crop treatments in Figure 4 received identical nitrogen rates and timing. The only difference was the amount of vegetation under the trees.

1) Vegetation provides carbon and soil organic matter to support increased populations of microorganisms that utilize N, reducing the amount of N in a leachable nitrate form.

2) Plants take up N, reducing the leachable nitrate N in the soil.

2) N is used at much lower rates per application 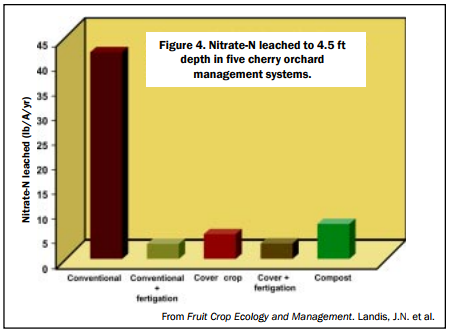 Is simazine leaching a problem?

Simazine leaching was very low in all treatments. The highest level, found in the conventional treatment, was less than 0.0002 lbs/A. Simazine levels were so low that there was no significant difference between treatments with and without simazine applied, due to residuals from prior years.

Soil quality can be defined as the ability of a soil to resist degradation and respond to management. All orchard sites should be assessed regularly. Soil organic matter is one of many indicators of soil quality (see list on this page). Through the process of mineralization, soil microbes decompose organic matter releasing nutrients to the tree. Adding carbon under the trees is one way to boost soil organic matter. Our work clearly indicated:

Picture 3. Use of ground covers was associated with increased biotic diversity. 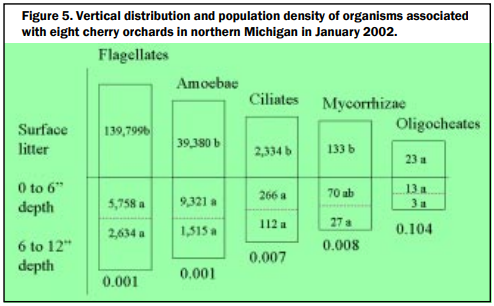 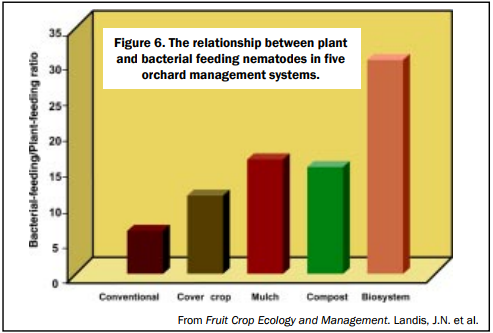 Two of the concerns with growing ground cover plants in the tree row are: 1) plant competition with trees for moisture during midsummer, 2) difficulty seeing tree trunks during harvest. These concerns can be addressed by promoting a good population of plants under the trees in fall and spring and by providing good weed control from early June through harvest (in Northwest Michigan) with the use of a contact herbicide (such as glyphosate or paraquat) or by use of a mulching system. A third concern is that vegetation provides habitat for voles.

In using legumes in a ground cover, consider:

1) Shade hastens the decline of legumes such as alfalfa.

2) Frequent mowing will favor the short plants such as Dutch white clover but is hard on the larger legumes. 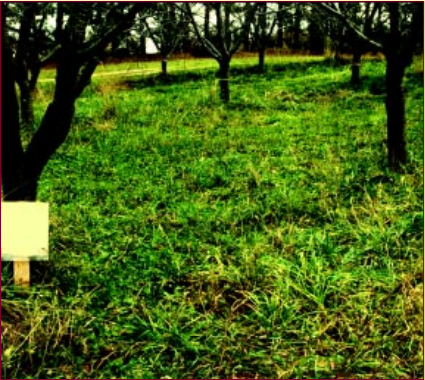