As the world’s biodiversity hotspots are increasingly stressed by their human neighbors, zoning is becoming a common strategy to balance environmental protection and human needs. But a recent study shows zoning for conservation demands reality checks.

“Zoning ordinances are rarely evaluated for their ability to make positive changes using empirical data on both human and biodiversity characteristics.” says Jianguo (Jack) Liu, an internationally recognized expert at Michigan State University in a study of coupled human and natural systems. “It’s critical to examine both human and natural systems to see if ordinances are working and understand what changes might be needed.”

A unique case study that does of one of the world’s renowned nature reserves in southwestern China shows that zoning is helping protect endangered giant pandas. The analysis from Michigan State University’s Center for Systems Integration and Sustainability (CSIS) also reveals critical weaknesses.

According to the paper, zoning ordinances can be useful to balance human activities and wildlife habitat as
long as a few limitations are remembered: Lines on a map don’t show up in a forest, laws mean little without enforcement and animals can’t read zoning ordinances.

“Zoning everywhere, in China and in the United States, is about drawing lines on a piece of paper. But the big challenge is always how do you bring those lines to life?” said Vanessa Hull, the lead author of a paper published in the Oct. 28 online edition of Biological Conservation. “The people who live in that landscape can’t see it and there are no fences. We’re showing that zoning is an effective tool for controlling some human impacts but not others.”

Hull is a fisheries and wildlife doctoral candidate in CSIS who has spent years periodically living in the Wolong Nature Reserve to understand the delicate balance between pandas and the people who live amongst them.

Wolong, like many nature reserves across the globe, is home to both animals and people. Increasingly, governments are turning to zoning ordinances to protect habitat while still allowing people access to a livelihood. People in Wolong historically have farmed, chopped down trees for fuel and construction, kept livestock and accommodated the tourists who stream in to see the beloved pandas in breeding centers.

Pandas are picky about their habitat – needing gentle slops, moderate elevation and plenty of bamboo to 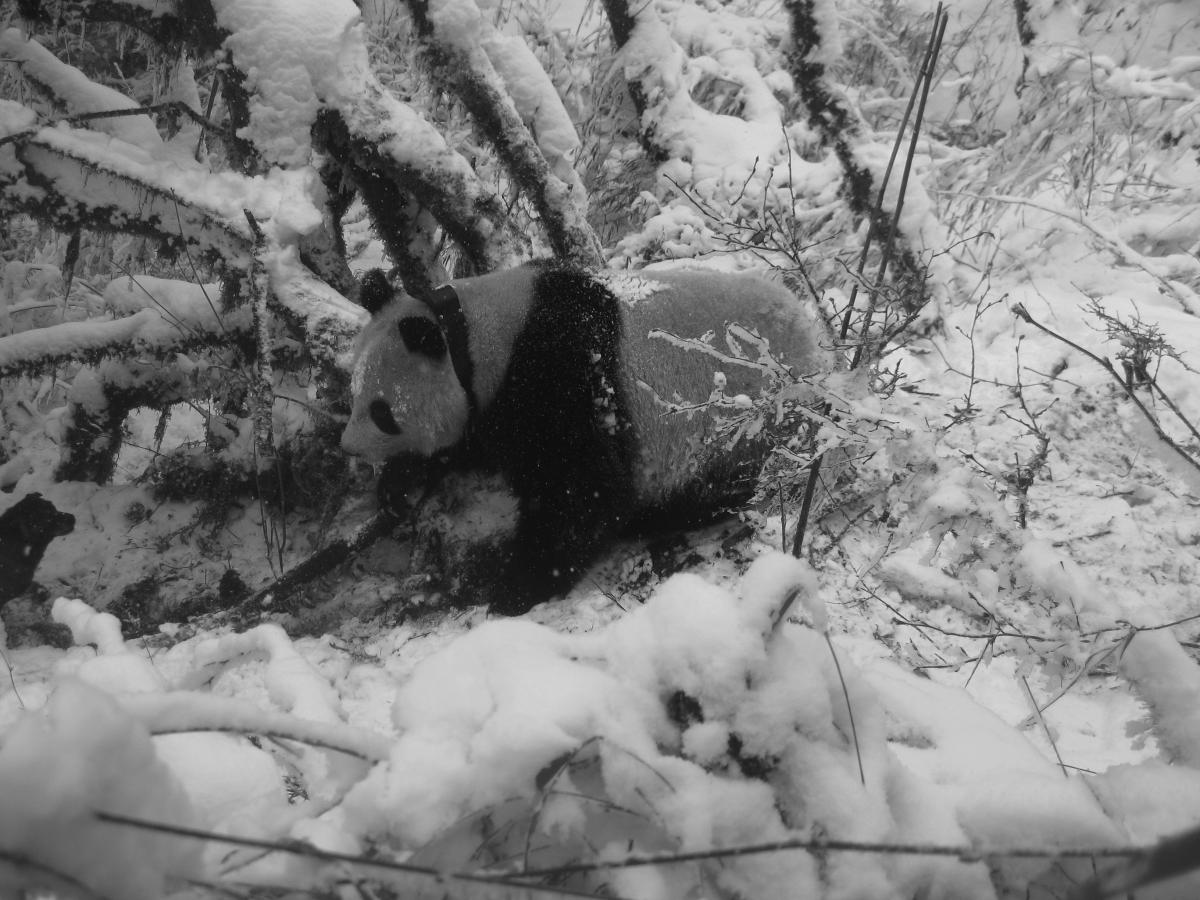 munch. While other species that contribute to Wolong’s rich biodiversity benefit from conservation efforts, the charismatic pandas drive much of the policy there.

Wolong has been zoned into three areas: The “core” area strictly limits human activity to limit human impact on pandas. The “experimental” area thrives with homes, businesses and roads. In between is a “buffer zone” of limited human access intended to acknowledge that it’s hard to declare a forest pristine if a hotel is right next door.

To understand how the zoning is working out, Hull and Liu, her mentor, CSIS director and Rachel Carson Chair in Sustainability, joined with colleagues to compile a broad range of data. Liu’s previous work on panda habitat classification, a national giant panda census, geographic data on locations of roads and human establishments, and new data on movements of individual pandas and livestock are combined to create an unusually robust look at the effectiveness of zoning.

Two female pandas – Mei-Mei and Pan-Pan – fitted by Hull and collaborators with GPS collars, provided new insight on how pandas move about.

The result is a way to breathe life into policy and provide a novel look that goes beyond theory. Hull said that zoning in Wolong is protecting some, but not all prime panda real estate. The study also is helping show where improvements are needed. Including:

“There are people who have no idea what the zoning rules are,” Hull said. “Zoning is meaningful and helpful when a large hotel complex is being proposed, but less real to a farmer living in a rural area who has no idea he’s likely wandering in and out of a core zone.”

She noted that enormous conservation efforts in China that pay people in nature reserves not to farm and to monitor to prevent timber removal have been crucial.

“We’re showing that you should have zoning in your toolbox to conserve habitat, but it shouldn’t be the only tool you have,” she said. “It needs to be paired with other policies when it comes to human behavior. We know that it is crucial to work directly with people and provide benefits to people to preserve habitat.”

The paper, Evaluating the Efficacy of Zoning Designations for Protected Area Management, was authored by Hull, Liu, academic specialist Andrés Viña and doctoral candidates Wei Liu and Mao-Ning Tuanmu from CSIS; CSIS alumni Marc Linderman, now assistant professor of geography at the University of Iowa, and Xiaodong Chen, an assistant professor of geography at the University of North Carolina-Chapel Hill; Zhiyun Ouyang, Weihua Xu and Jindong Zhang from the Chinese Academy of Sciences; Shiqiang Zhou, Jinyan Huang and Yan Huang from the China Center for Research and Conservation of the Giant Panda; and Hemin Zhang, the director of the Wolong Nature Reserve.

The Past, Present, and Future of Land Use in Malawi: A Background Review

An Early Assessment of the Impact of COVID-19 in Malawi

The Future of Smallholder Farming in Malawi

Agricultural Transformation in Malawi: A Call to Action

Have you ever wondered how to hatch a chicken egg?