Given the relative corn, wheat, and soybean prices we are seeing both with old and new crop prices, which are indications of relative returns per acre, we are likely to see some significant acres shifts. In summary, given corn and soybean prices today for both old and new crop would indicate higher returns per acre for corn than soybeans given trend yields for both. And two, higher returns for spring and durum wheat than soybeans in those areas, and to some degree corn. Although the difference in returns per acre are now smaller than they were for a while, that is partially due to the market anticipating the shifts.

We will have a better idea of what plantings after the March Planting intentions report to be released March 29, and then again after the June Acreage Report to be released June 28. But it is important to take a first cut now for planning purposes, which can then be adjusted marginally if needed as we going through the planting season. How the tariffs are resolved, if before plantings, will also be a factor.

I expect 2019 planted corn acres to be up about 2 million acres to 91.2 million acres as producers look for higher returns per acre on average. And many can easily make that kind of marginal shift without compromising their benefits from rotation significantly. In areas that also grow winter wheat, most of this shift will come from soybeans versus wheat. Of course if we had the Winter Wheat Seeding report, that was to be released January 11, we would have a better idea.

On the use side, I expect exports to be a bit lower due to somewhat higher prices and a little larger expected world feed grain production. Feed use is expected to be about the same to a little higher, with the somewhat higher corn prices offsetting some of the increase in livestock production. Ethanol will have to compete against continued relatively low gas prices.  Check out table 1.

This puts expected ending stocks at 1,534 million bushels, 170 fewer than the expected 2018-19 marketing year.  With the stocks-to-use ratio dropping from a somewhat burdensome 11.3%, to a bit better 10.4% of use. As we move to just under 10% we typically should be near cost of production. A 5 bushel less than trend yield would probably get us there, all else constant, and given you aren’t the one of the ones with the lower yields. This analysis would push the expected annual average prices up about 10 cents/bu from this year. 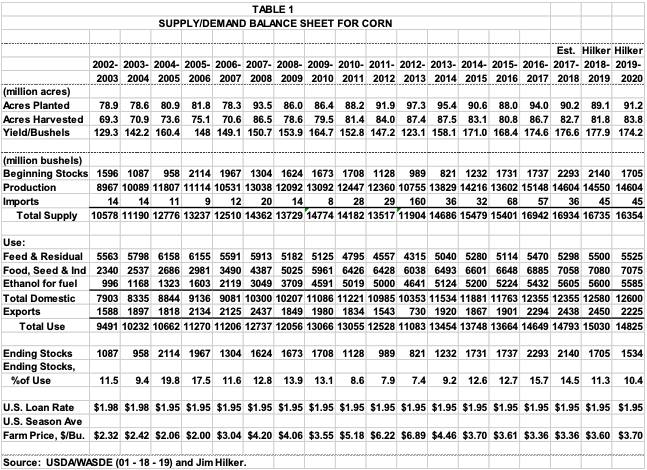 As stated earlier, I expect winter wheat acres to be nearly the same as last year. If the planting season had been better, they may have gone up marginally.  We will know once the Prospective Planting report is released, or at the June Acreage Report, which ever comes sooner. But I expect the spring wheat areas, primarily Minnesota and North Dakota, to increase wheat area by about 3 million acres. This would still put total wheat acres, at 51 million acres, lower than any time before 2016.

As mentioned, I expect these acres to come out of both corn and soybean acres in the spring wheat areas, but mostly soybeans. And spring weather may play a factor along with any trade dispute settlements. The 51 million planted acres, an expected harvested area of 43.7 million and with a trend yield of 48.2 bu/ac, production is expected to increase as shown in Table 2. And even with a smaller carryin, total supplies are expected to increase. 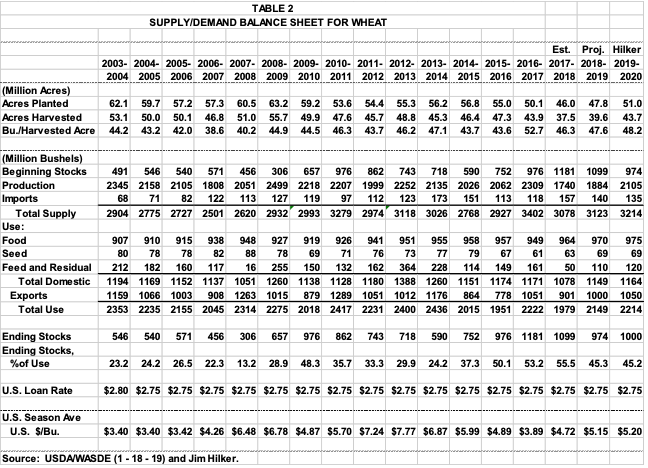 So where does all this leave soybeans?  My projection is soybean planted acreage will be down about five million acres. Which at 84.1 million acres would still be the third most on record.  And when you multiply a trend yield of 49.4 bu/ac by expected harvested acres of 83.2 million, you have production of 4115 million bushels, down 335 million bushels relative to 2018. However, beginning stocks are expected to be up almost 500 million bushels, putting total supply higher than this year, see Table 3.

On the positive side, expected use is would be expected to be up.  However, this is mostly based on soybean exports recovering to a level near pre-tariff times.  Which I fully expect. This is not saying pre-tariff time plus the addition growth we would have had given no trade war, but rather back to pre-tariff levels.

The net result, is an expectation that ending stocks will drop off significantly in 2019-20 versus 2018-19, but still be the second highest level on record by 175 million bushels. This should help prices by 10-30 cents per bushel. Over the next couple of years we should be able to get back near the economic near cost of production in corn, wheat, and soybeans, with some help from lower land rents. If the world and U.S. economies grows even marginally and there aren’t any trade interruptions. 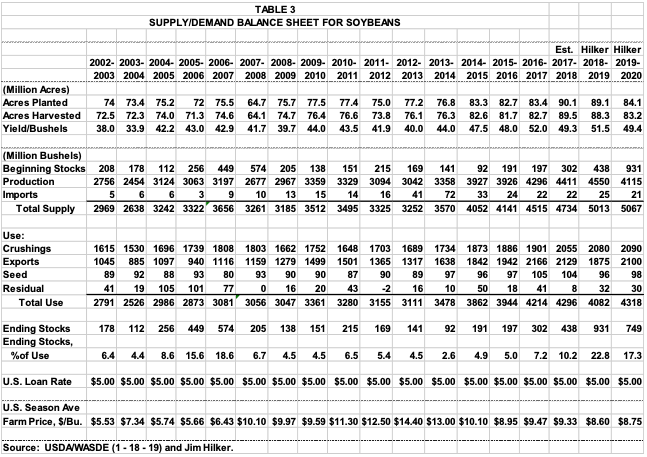 The article is also published in Michigan Farm News.