Retired automotive purchasing executive Deb Spehar wants to help feed the world, and she is confident that Michigan State University (MSU) will steer that charge down the road. 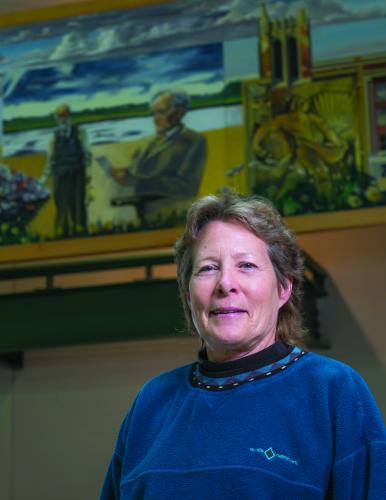 Started career and spent 19 years at Ford Motor Company. Retired as director of global purchasing with GST Auto Leather in 2013.

WHY give to CANR?

“Agriculture is what Michigan State is known for. If I had gone to a college that didn’t have much at stake in terms of ag and natural resources, it may have been different. But it really boiled down to leaving a little more of a legacy and doing some good for the world, instead of just me.”

Retired automotive purchasing executive Deb Spehar wants to help feed the world, and she is confident that Michigan State University (MSU) will steer that charge down the road. So much so that she has included the MSU Department of Biosystems and Agricultural Engineering (BAE) in her estate plans.

Establishing a student scholarship within BAE, a department split between the colleges of Agriculture and Natural Resources and Engineering, did raise a few eyebrows at first given that Spehar’s graduate degrees are both in business.

“I knew I wanted to give to MSU, but decided on BAE because science and engineering prompt innovation,” she said. “With the charge to feed the world and do a lot more with less resources – whether it’s human capital, machinery and/or land resources to grow food – we need science and technology to move us ahead. Business pulls it all together, but it doesn’t make those things happen. Science, technology and engineering do.”

Spehar has contributed annually to MSU for a number of years, but wanted to do something more substantial with an inheritance her father left her in 2014. It was then she recalled how her maternal grandparents had started a college scholarship at their tiny Baptist church in the country. Neither her parents nor grandparents attended college.

“My grandfather and grandmother didn’t have a lot of money, but they managed to set aside a couple hundred dollars here and there,” she said. “It wasn’t much – $500 to $1,000 a year – but it helped. I thought if they could do something, then I could, too.”

When paired with James Obear, then in the MSU Office of Planned Giving, to talk about the scholarship, Spehar realized something special was happening. Spehar’s late husband, Timothy Sr., a Rutgers graduate, had been good friends and golfing buddies with Obear.

“It was serendipitous,” she said. “When we met, James and I talked a lot about how education really is the key to everything. That’s why Thomas Jefferson built the University of Virginia. Before that, all the schools were for the rich…You need to educate the masses. Then maybe one kid will help two kids, and so on.”

Despite little experience with agriculture other than spending time on her great-aunt and great-uncle’s sheep and chicken farm as a child, Spehar knows MSU will continue in the driver’s seat when it comes to finding solutions to feed the future.

Want to learn more about how to make a planned gift to the CANR? Visit http://www.canr.msu.edu/alumni_donors/giving_to_canr or contact CANR External Relations at 517-355-0284.