Professor Jim Hilker updates his projections on the Michigan corn, wheat, and soybean market outlooks for 2019.

Professor Jim Hilker updates his projections on the Michigan corn, wheat, and soybean market outlooks for 2019.

Due to the lapse in Federal funding, the USDA Crop Production 2018 Summary, the USDA Quarterly Stocks Report, and the USDA Winter Wheat and Canola Seedings were released on a delay, from January 12 until February 8. Additionally, the World Agricultural Supply and Demand Estimates report for January 2019 will not be published, but has resumed publication on February 8 — incorporating the results of the above reports.

Better late than never, while there were no huge surprises, there were significant updates with respect to 2018 production, as well as significant differences from expectations for disappearance and wheat seedings. Most of this market report are discussing these updates and most of the updates are for the 2018-19 crop marketing year, the middle column of the three tables.  However, the changes through ending stocks affect 2019-20 which I discussed a month ago, as well as the winter wheat seedings.

On the use side, projected 2018-19 feed use was lowered 125 million bushels due the quarterly stocks report showing less corn disappearance than expected after being adjusted for the lower than expected crop. This indicates mostly a lower feeding rate, along with slightly lower meat production than previously expected over the period. FSI use is lowered 40 million bushels, reflecting reductions to corn used for ethanol and other industrial use. For ethanol, the reduction is based on the most recent data, and other FSI use is lowered 15 million bushels with lower projections for high fructose corn syrup and glucose and dextrose given production to date and projections. Export projections were left unchanged from the December projection.

The USDA left the 2018 Annual Wheat Production unchanged from the September release of the Small Grains Summary. You can see the numbers in the middle column of Table 2 below for 2018-19. However, a few changes were made to the 2018-19 use numbers. Feed and residual use is lowered 30 million bushels on larger than expected second-quarter stocks reported in the NASS Grain Stocks report. Seed use is down 6 million bushels reflecting 2019/20 winter wheat planted area released in the NASS Winter Wheat and Canola Seedings report. Projected exports were left unchanged.

Winter wheat planted for 2019 was estimated at 31.3 million acres, down 4 percent from 2018. This was the second lowest on record, with the data going back to 1909, and the lowest was an odd circumstance pre 1919.  The expectations were for about the about same as last year, but due to excessive moisture and cool weather, the planting window was short.

Due to these updated numbers I lowered my 2019-20 planted acre estimate seen in Table 2 by 2.5 million acres. Over a million less due to the decrease in winter wheat planted, and the remainder in lower expectations for increases in spring and durum wheat planting. This will likely lower ending stocks, and help prices.  Although the market as not indicated that to date.  Much will depend on the rest of the world’s crop.

U.S. soybean production for 2018 was a record 4,544 million bushels, up 132 million bushels from last year’s record.  However, it was down 56 million from the November projection, although near expectations. The U.S. average yield was 51.6 bu/ac, down a half bushel from the November estimate, but up 2.3 bushels from last year. It will now go down as the second highest yield on record, just below 2016’s 51.9 bu/ac.

The USDA supply/demand update increased projected crush 10 million bushels due to production to date and indications of more of the same.  Projected exports were lowered another 25 million bushels, now about 250 million below last year.  Exports may have been lowered more, but the 2018-19 Brazilian soybean crop projection was lowered 5 MMT due to various issues.  In net this lowered total use 15 million bushels.

Ending stocks were lowered 45 million bushels as the projected supply decrease was more the use decrease.  This still put ending stocks at 910 million bushels, a whopping 22.2% of use, the highest stocks to use ratio since 1985.  The annual average price is expected to be $8.70, down from last year’s $9.33. 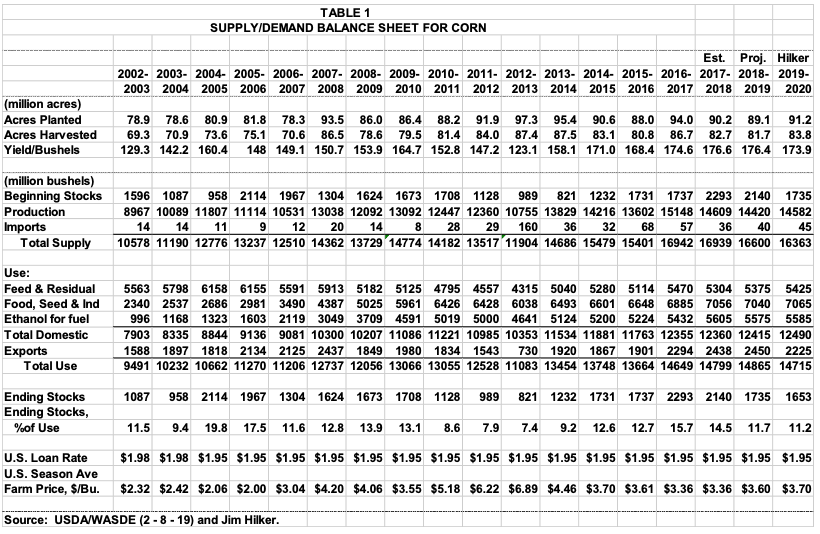 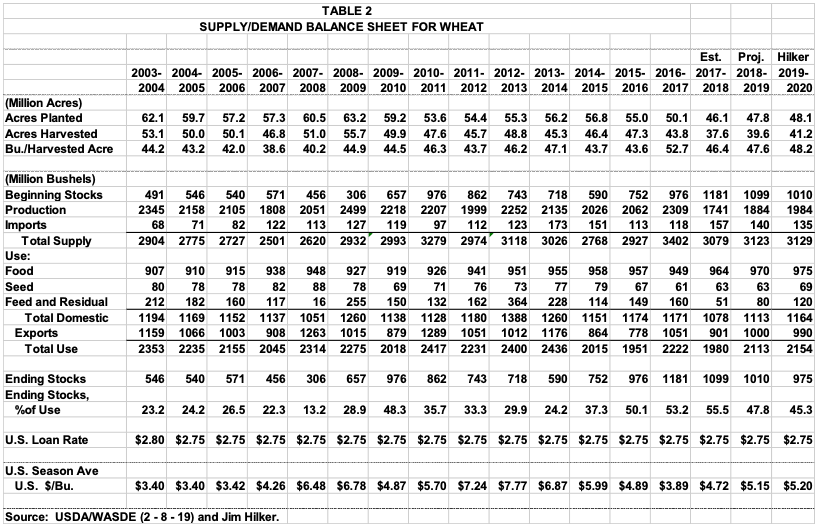 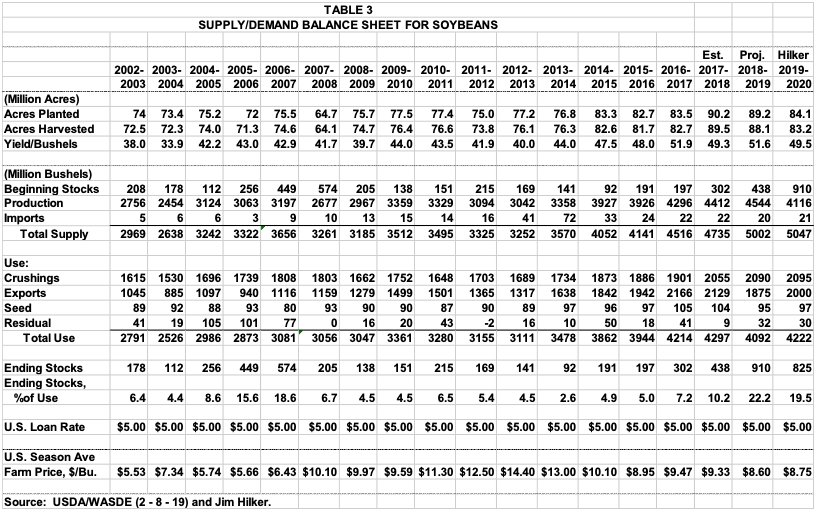