Partnering with state agencies to respond to swallow-wort vines

The implementation of natural enemies to reduce and/or mitigate pests, a process known as biological control, is one of the most viable long-term solutions to address invasive species. Michigan State University Department of Entomology Professor Marianna Szucs is focused on exploring evolutionary and ecological processes to better understand these methods.

Szucs studies the role of rapid evolutionary processes and reciprocal interactions between ecology and evolution in biological control agents and their targets, and applies it to various species, including swallow-wort vines. 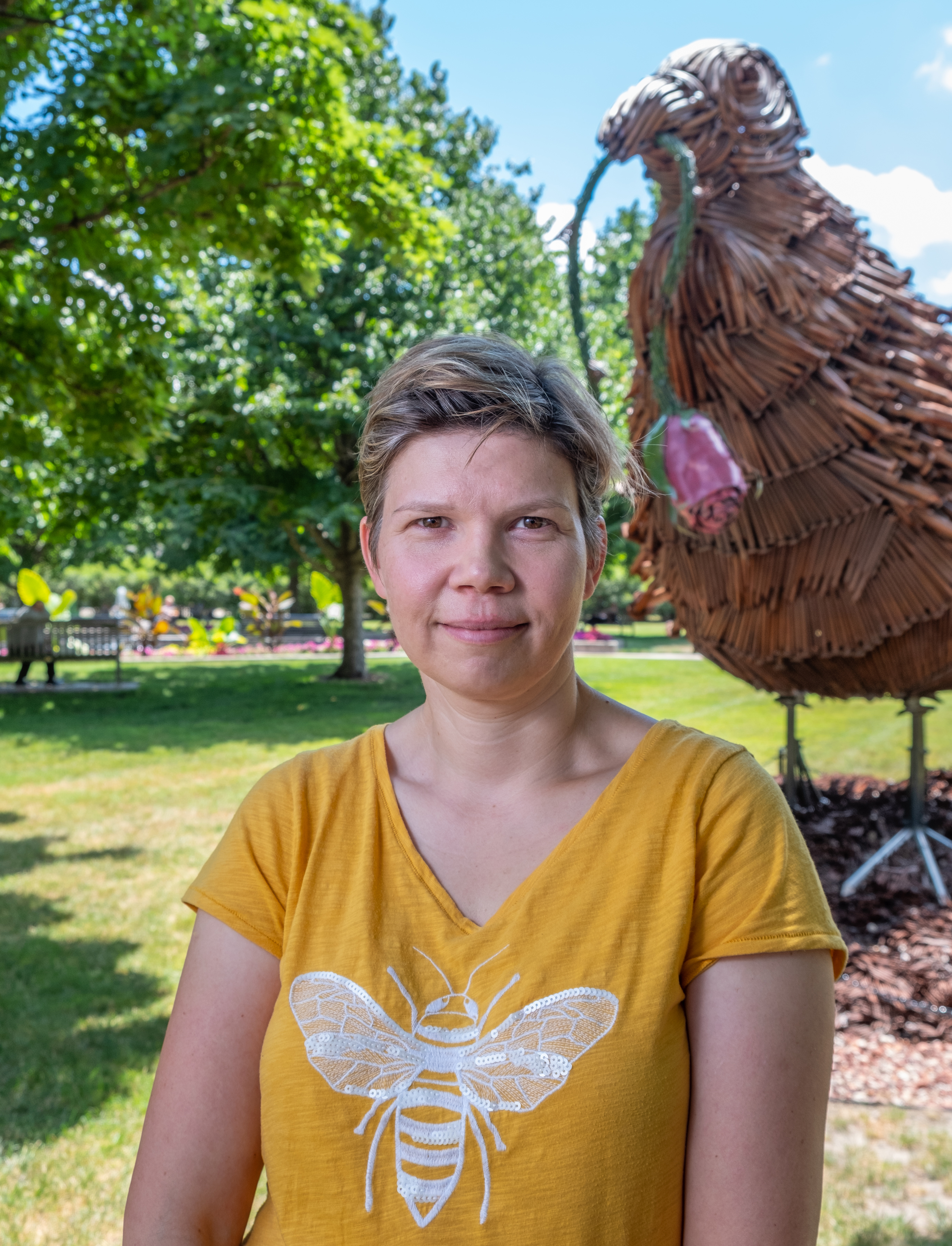 Black and pale swallow-worts are invasive plant species that release biochemicals into the soil, preventing other plant species from taking root. Large monocultures of swallow-worts replace native and other plants that contribute to diversity. They are also toxic or bad tasting to animals. Monarch butterflies can mistake them for milkweed hosts but their laid eggs will not develop. Swallow-wort vines are also toxic to livestock, deer and other animals.

Recipient of a grant from the Michigan Invasive Species Grant Program through the Michigan Department of Natural Resources, Szucs is in the early stages of conducting biological control studies on the vines.

“The swallow-wort biological control program in the U.S. is in its infancy,” Szucs said. “We have a biocontrol agent, a moth whose larvae feed on the foliage of swallow-worts, but we know so little about it. It's essentially not established anywhere in the U.S.”

“We are really in the first year or two of working with the biocontrol agent, but this year I think we made great leaps,” Szucs said. “We released it at 18 field sites, most of them in Oakland County, because that's the core of the infestation. One very important factor is obviously release size.

Szucs’ Ph.D. student Brianna Foster created populations in the lab of the agent with higher genetic diversity by hybridizing them with colonies collected in Canada where they’re already established. For the field releases, individuals were used either from their original lab colony or from the hybridized stock using different release sizes to assess how genetic diversity and release size interact for establishment.

“We may not see results next year, but two or three years into the study, we should be able to tell the success of establishment, and if it's mediated by founding size or genetic diversity, or both of those factors,” she said.

Szucs is partnering with management organizations in the areas with the largest infestations, specifically Oakland County.

“Oakland County Parks have been managing swallow-wort for a long time. When they wrote the letter of support for my research, they said they had about 450 acres of swallow-wort and that was in 2018,” she said.

“The research we are doing related to the design of the biocontrol release by testing the importance of genetic diversity and release size is unique. It hasn’t been done in the field before,” she said. “That will inform future biocontrol releases on what aspect is better to focus on – release size or genetic diversity. So, this work could be very beneficial to learn the effects of crossing different populations to increase diversity versus just releasing more of the agents.”

Sticking it to the stinkbugs

Szucs also has contributed to the fight against the brown marmorated stinkbug, a shield-shaped insect that uses its piercing mouth to extract plant juices from fruits, seed pods and nuts on numerous wild and cultivated plants. It was transferred to North America from Asia sometime before 1996 and was first detected in Michigan in 2010.

In 2018, her lab discovered an exotic parasitoid in Michigan that has an attack rate on brown marmorated stinkbugs much higher than those of native parasitoids in North America. Szucs and her colleagues hope to put that to use to control the stinkbugs.

“The parasitoid came here on its own, and once it's here we were able to redistribute it within the state,” she said. “So, what we are doing is essentially speeding up biocontrol by increasing the geographic distribution of the parasitoid and also boosting its numbers. The results so far look promising, and it looks like we can increase the parasitoid’s populations across the state.”

Her biocontrol methods to eradicate invasive species are spurred on by the reduced negative effects of other treatments.

“We see millions of gallons of herbicides and insecticides going into invasive pest control, and currently those treatments are needed, because these pests have the ability to cause lots of economic damage” she said. “But it costs money to spray and it disrupts already established integrated pest management programs.

“I try to emphasize, despite biocontrol being a slow process, you're investing in the future.”

Most of her research programs set the foundation for treatment programs and the first results are not apparent for several years.

“We have to take the long-view perspective, but I feel if you don't invest in these methods and you don't put that work in, then there is no future control,” she said. “You just keep spraying, because there is no alternative.

“We are trying to offer an alternative to how these species can be managed. Once the biocontrol agents are established, you don't have to do much to maintain the treatment program. They adjust in the environment and they reproduce on their own. So, you created something lasting and that's the fulfilling part of my job for me, to look into the future and hope that these biocontrol programs have long-term positive impacts.”

Developing the next generation of wastewater treatment technology

Examining the impact of climate change on freshwater fish

Remembering a true champion of conservation

Conducting research at the crossroads of trees, wildlife, water and climate.