We were so excited to have an amazing group of 24 campers and 4 teen stewards as part of the 2022 MSU Tollgate Farm Vet Science Camp. Joining me as co-leader was Elyan Forbis, a former Tollgate Farm steward and sophomore this fall at MSU as a pre-vet student. Our four strong stewards were Elizabeth Hoy, Emma Christopherson, Joe Kalakaio, and Clara Alyas.

After Monday morning flag ceremony, CARES skits, and a group icebreaker, we began our week with our vet science camp orientation and an exercise called K, W, L during which we brainstormed things we know and things we wonder about veterinary medicine and animal science. Our first livestock chore of the week was goat milking where we explored the Toggenburg goat breed, their traits, and their vision.

During lunch we met with vet students and techs Hannah Carlson and Sydney Puda who shared a challenge with us. Sydney wanted to know, “Could we explore a complex set of symptoms in a sick dairy cow and use diagnostic questioning and skills to assess the situation and diagnose the cow?” With a careful process of examination of the facts and investigation, campers were able to rule out a number of possibilities and home in on a condition known as mastitis. Campers impressed Sydney and Hannah with their sophisticated line of questioning. Sydney and Hannah went on to describe their paths of study and programs as well as work experience that have gotten them to where they are today on their path to becoming vets. 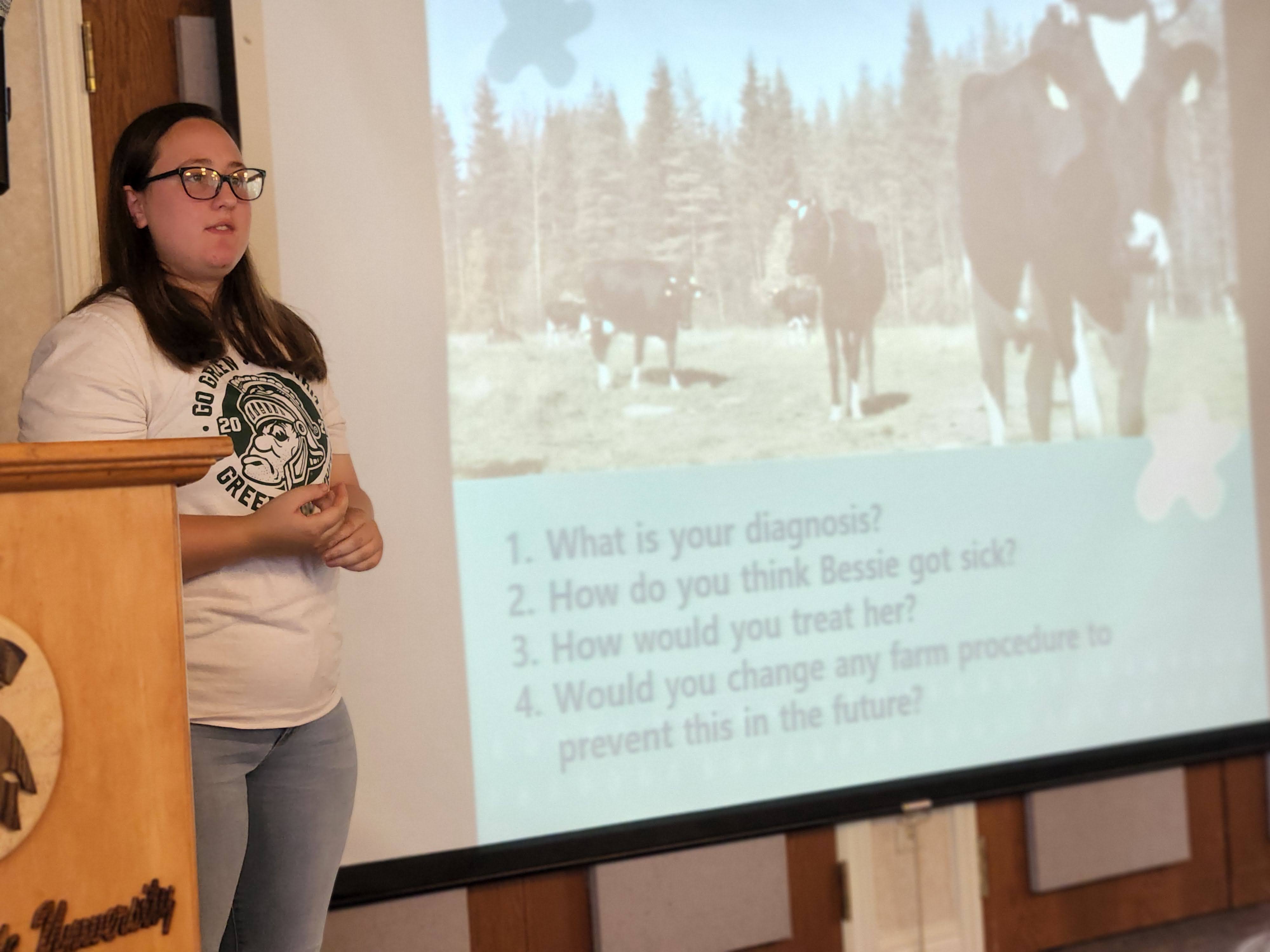 Also on Monday, MSU Extension Animal Science and Dairy Educator Melissa Elischer joined us from campus to share her expertise and knowledge about animal wellbeing and the five freedoms, animal senses, flight zone and more. Melissa distinguished between animal well-being, animal welfare, and animal rights. We visited the sheep and goats to observe differences and similarities in how they respond to humans. Recognizing that the Tollgate sheep and goats have diminished flight zones because of our frequent handling of them in animal education, we were still able to utilize their flight zones to get a flock to go where we wanted by our movement and without ever touching them. Melissa demonstrated many principles by having campers act out being the animal or handler. She also took the time to define each species Tollgate has on the farm and make sure campers understood their history and traits.

Tuesday at Vet Science Camp is traditionally Horse Day! After getting to know one another better with 2 Animal Truths and a Lie, campers visited with Tollgate Horse Camp Coordinator Ms. Diane who introduced them to our ponies Friday and Sesame. Campers explored safe handling of horses as well as the reasons, tools, and techniques for grooming. Half of the campers worked on pasture management while the others groomed the ponies and then they switched jobs. 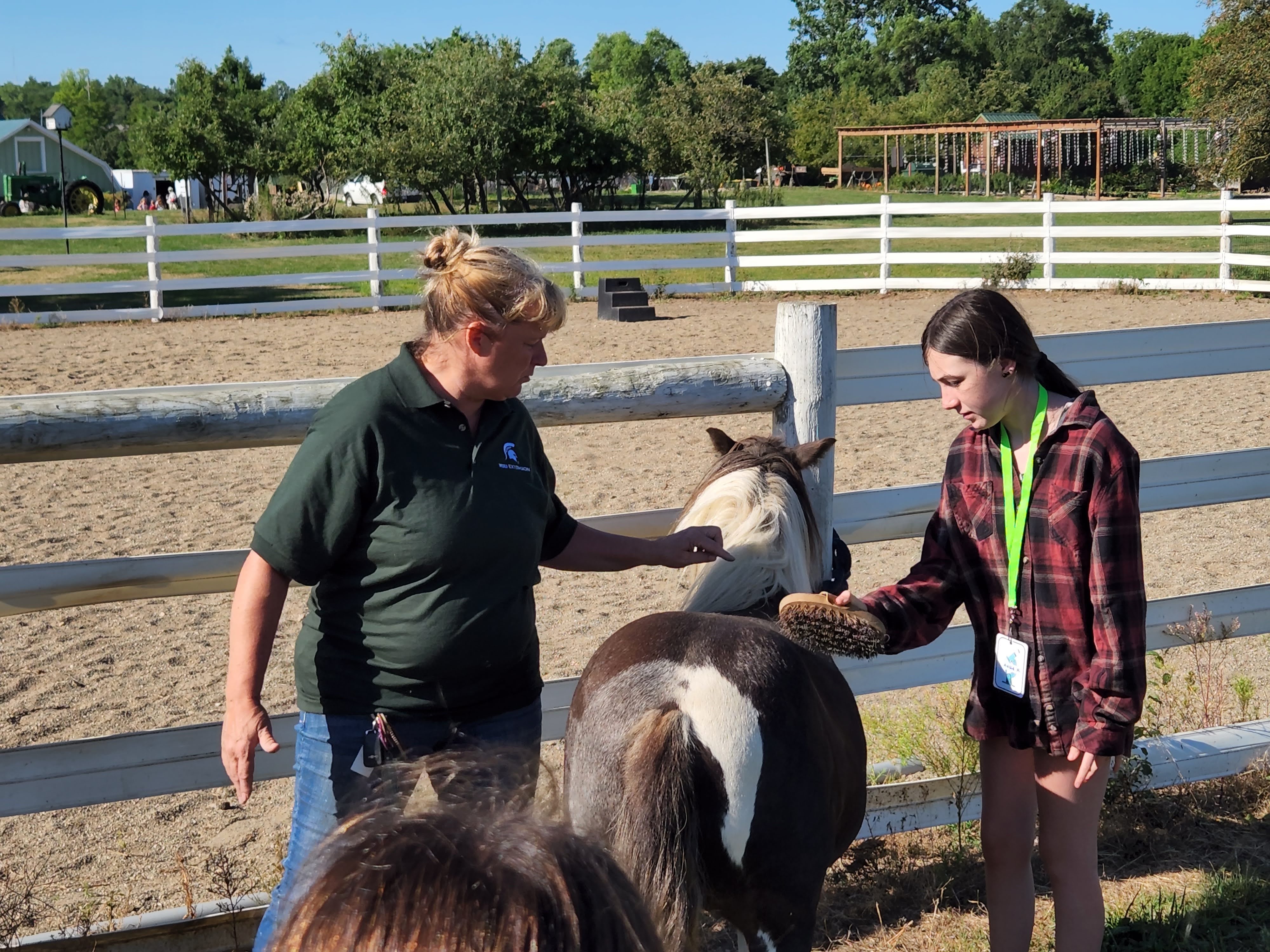 When Tollgate horses need care, we call Dr. Lobar of Equine Veterinary Services. Dr. Lobar visited Tollgate Vet Science Camp to share her knowledge and expertise with campers. After sharing her training and career path, Dr. Lobar covered comparative anatomy of horses including the skeletal and digestive systems. Ponies Friday and Sesame were the center of attention this morning as Dr. Lobar described their anatomy and care.

Dr. Lobar had campers practice flexion where they held up the horse’s leg and hoof in their hand for a short period of time. Immediately afterwards, they trotted the horse to see if they could observe any abnormality in the gait which would indicate soreness or lameness. So that campers could experience flexion themselves, Dr. Lobar had campers squat down for up to a minute and then race across the field. 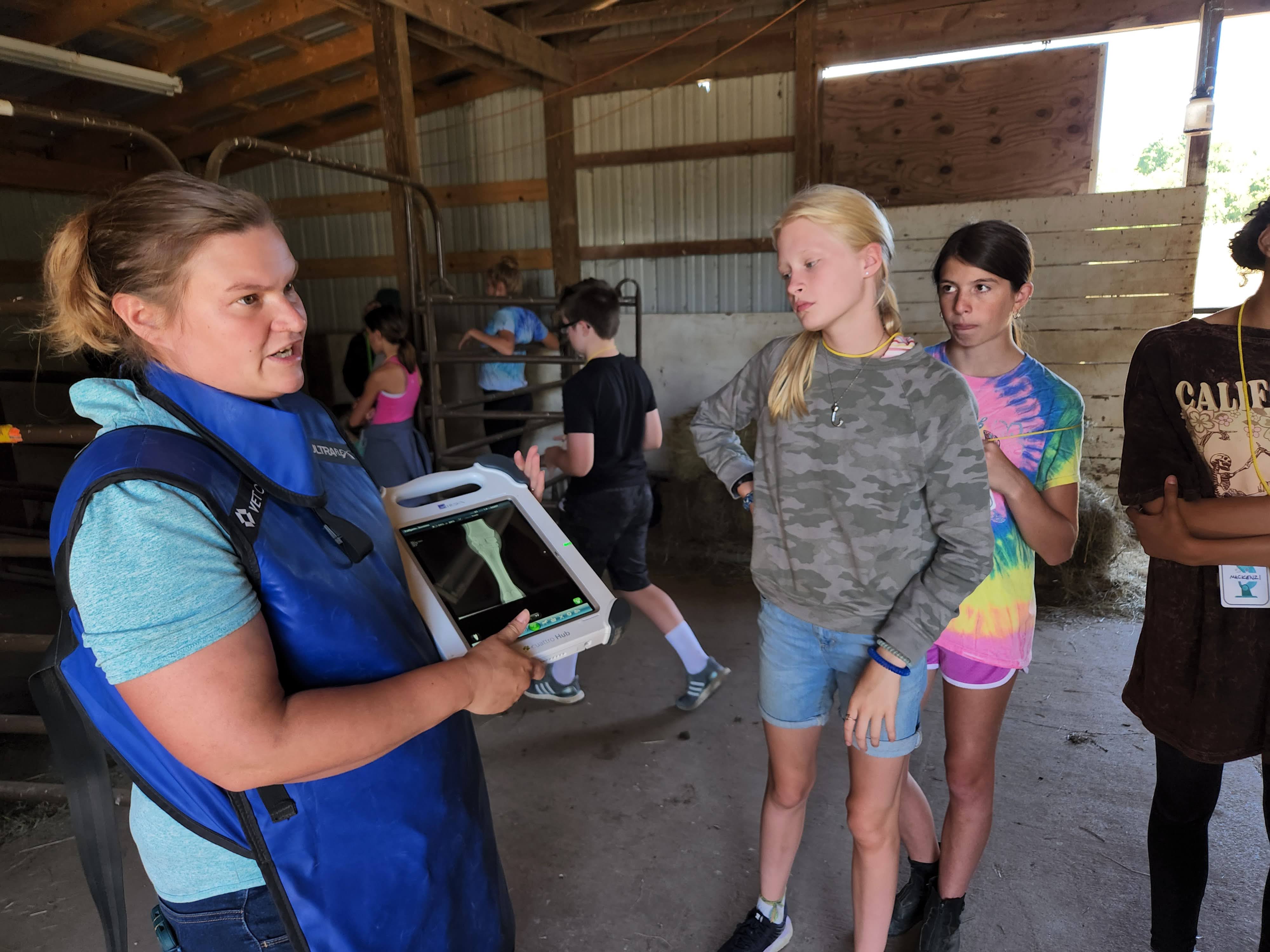 Another diagnostic tool demonstrated by Dr. Lobar and her assistant Rebecca was the X-ray. Campers were able to choose which part of the horse Dr. Lobar would x-ray in order to see the x-ray machine in action and help rule out any problems in various parts of the horse’s body. Meanwhile, campers took turns listening to the horses’ digestive systems and hearts using a stethoscope. Campers learned to locate and identify tendons in the horse’s leg. Campers shared what they learned about the digestive and skeletal systems of the horse by telling back what they learned in a fun and interesting way. Some drew with chalk the full length of the many parts of the digestive system of the horse on the lane while other campers drew the skeletal system. 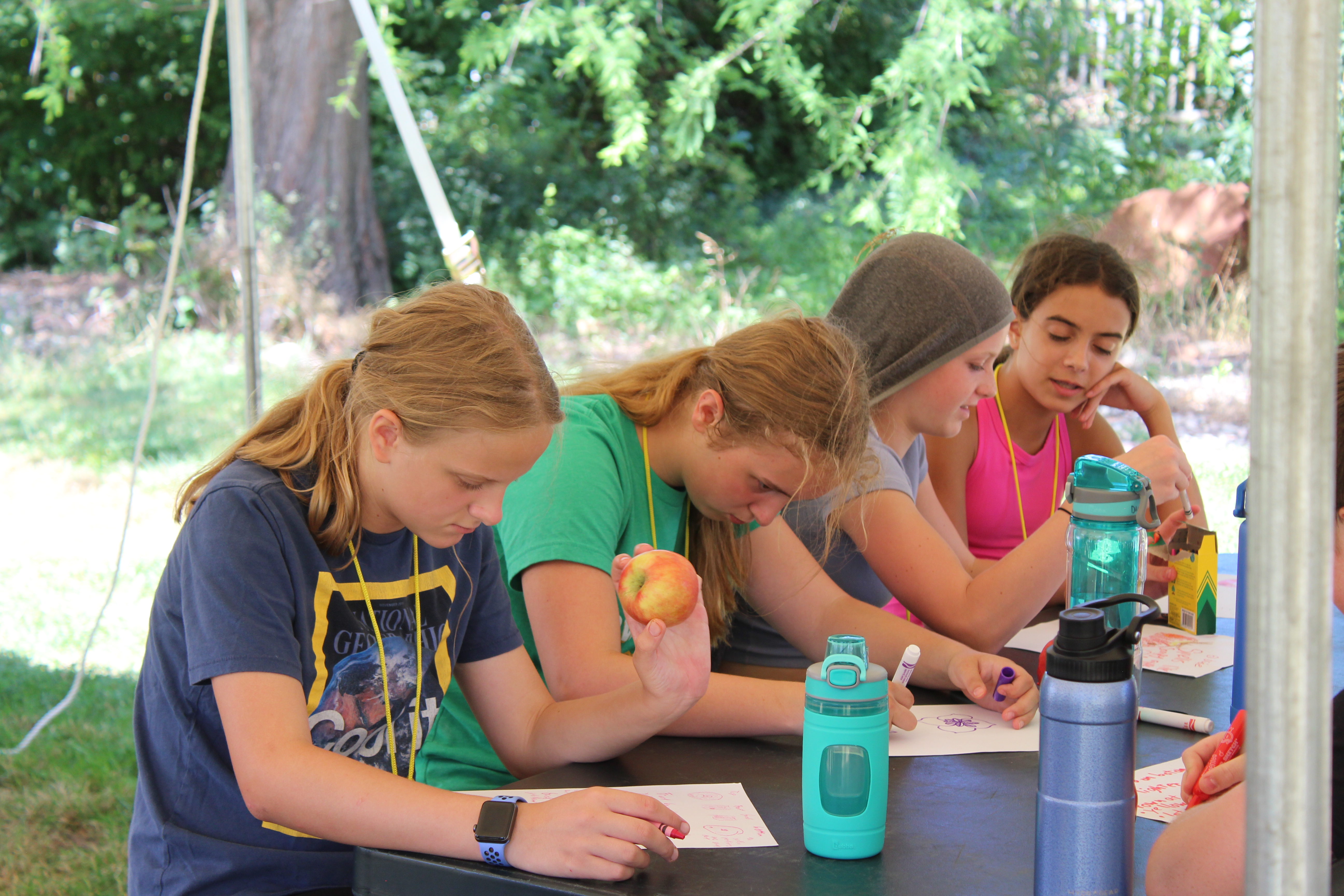 To drive home the importance of observation and knowledge of the animals in their care, campers took a few moments to do an activity called That’s My Apple. Observing one particular apple, drawing its physical traits and markings, they then mixed their apples in a large group. Not surprisingly, due to their careful observation and record-keeping, each camper was able to find their particular apple easily. To end horse day, we had a visit from former livestock coordinator Sam Stokes who demonstrated how one can make a hoof wrap to treat an abscess using a model made from a real horse’s hoof. Campers proceeded to practice making abscess wraps on one another’s fists. 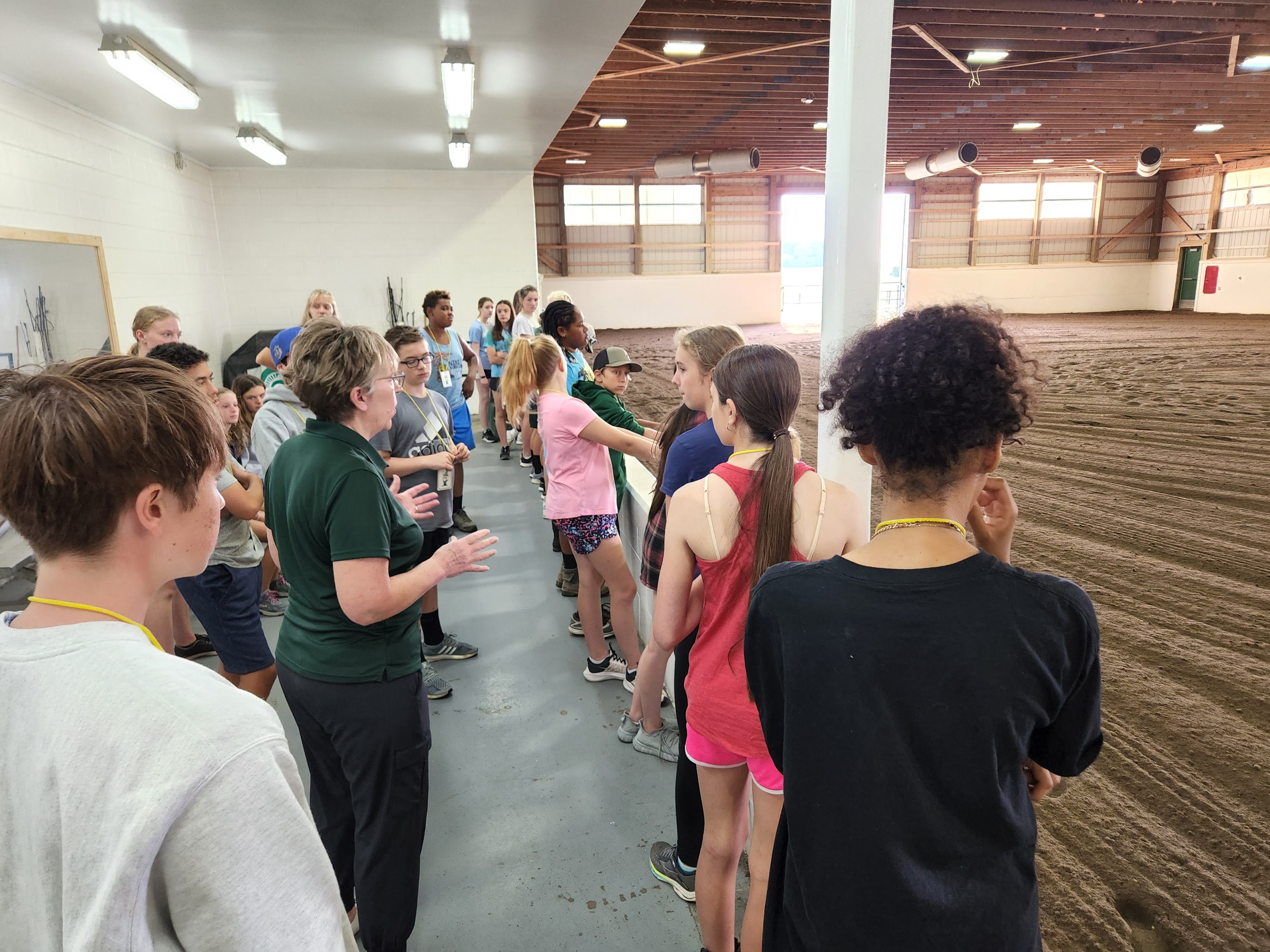 Our next stop on the vet science campus tour entailed visiting the Dairy Barns. Farm Manager Jim Good and Assistant Manager Chris graciously showed us so much about the facility including where the cattle are bred using AI, how the calves are cared for, the milking process, and much more. Campers had the option to place a sleeve on their arm and place their arm inside the rumen of a cannulated cow. Ask your camper what they found most interesting about our stop in milking land! 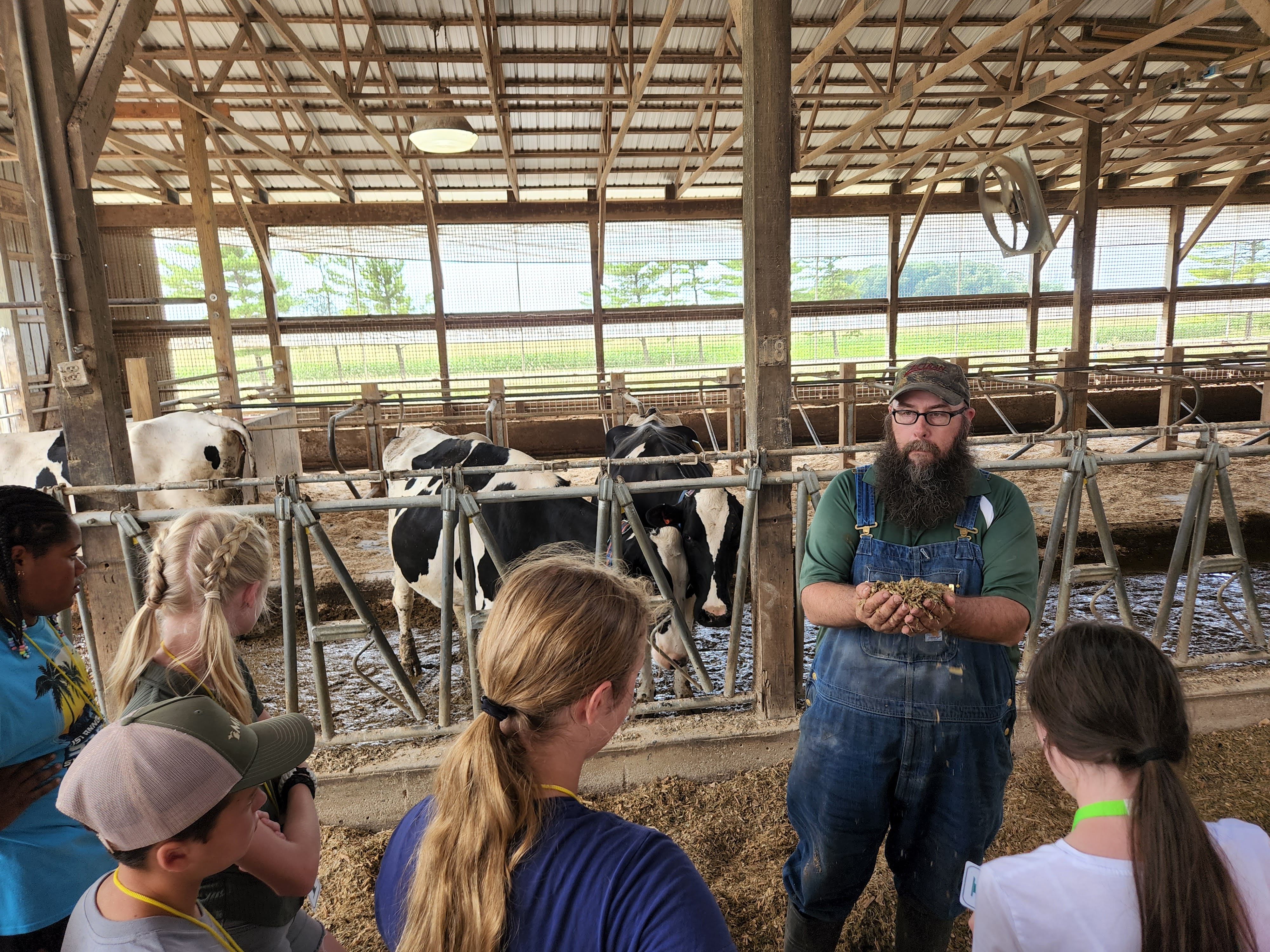 The group of eager learners also visited the swine barns to learn about the boars, sows, and piglets. Exploring how MSU uses research-based content and methods to teach about healthy livestock agriculture, campers were exposed to many new concepts in applied animal science. Among many swine they met that day, campers met Pandemic the pig and learned lots about the importance of biosecurity in farming! After a stop at the MSU dairy store for ice cream made from cow’s milk that came from the very barn we visited, we made our way back to Tollgate, exhausted but happily playing games and chatting all the way home.

“I am a cow, 4 compartments have I. In goes the green grass and out goes the pie!” Thursday we delved into the world of the ruminants - our sheep, goats, and cattle. We began our day with an activity emphasizing the domino effect of biosecurity hazards and how we can prevent lapses in biosecurity with proper management and strategies. Campers also had a lovely moment to enjoy a garden kitchen cheese tasting. The campers sampled fresh mozzarella made from cow’s milk, goat cheese, and manchego made from sheep milk on crackers. 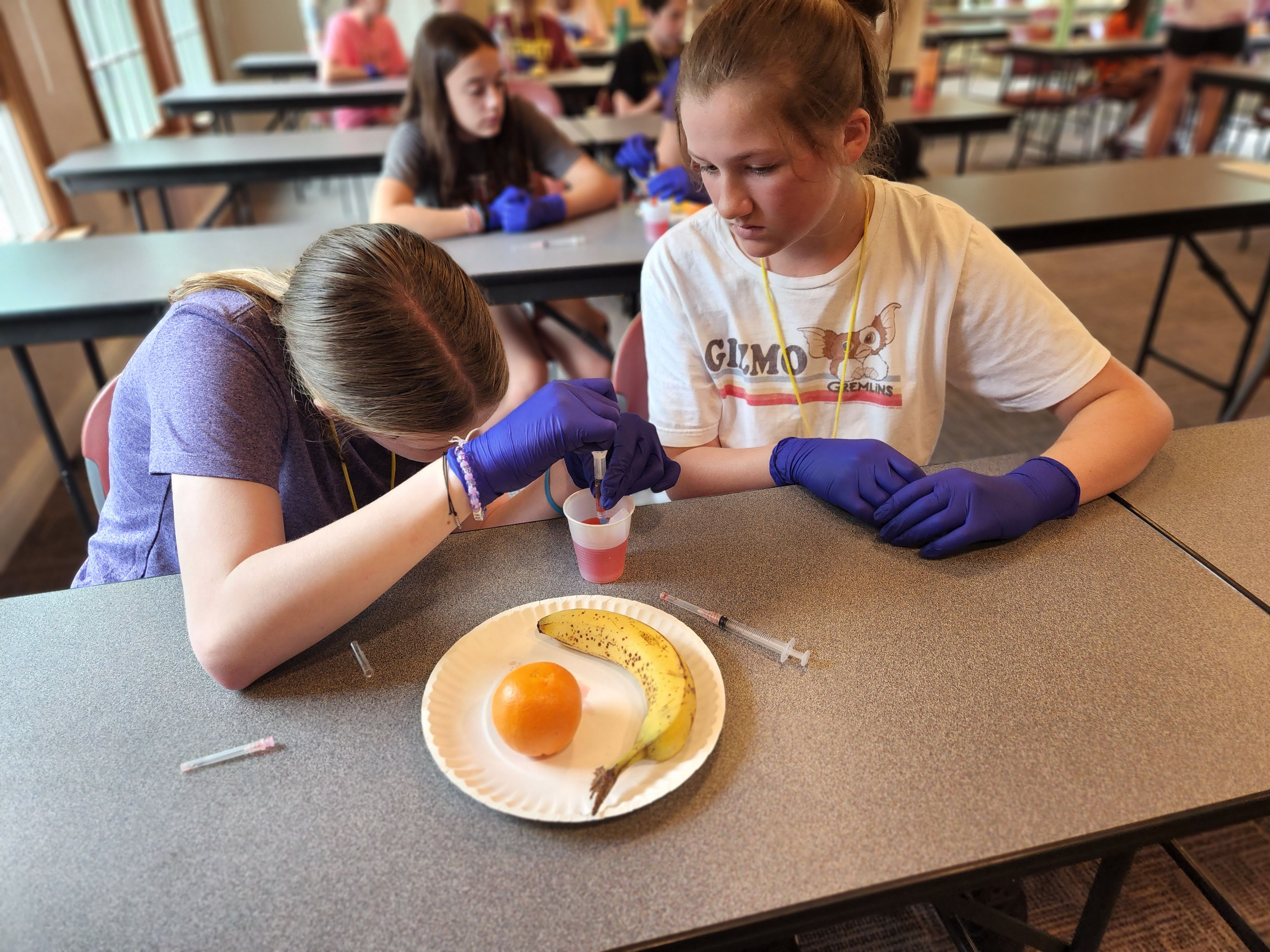 Following our foray into cheese tasting, Elyan Forbis taught campers about livestock injections. In addition to exploring why we give injections to animals, we covered a list of several injection types, centering in on intramuscular (IM) and subcutaneous (SubQ) injections. Rather than poke and prod our livestock, we practiced giving injections on fruit, using real syringes and needles and learning safe techniques using these tools.

Also Thursday morning, campers learned humane animal husbandry and animal movement techniques from Temple Grandin. Grandin emphasized reducing visual distractions, taking advantage of the animal's instinct to return the way they came and ensuring the cattle can see where to go without seeing the handlers. After watching Temple Grandin share about the proper design of cattle chutes, campers were divided into small groups and given a set of materials with which they could design and build a cattle chute. 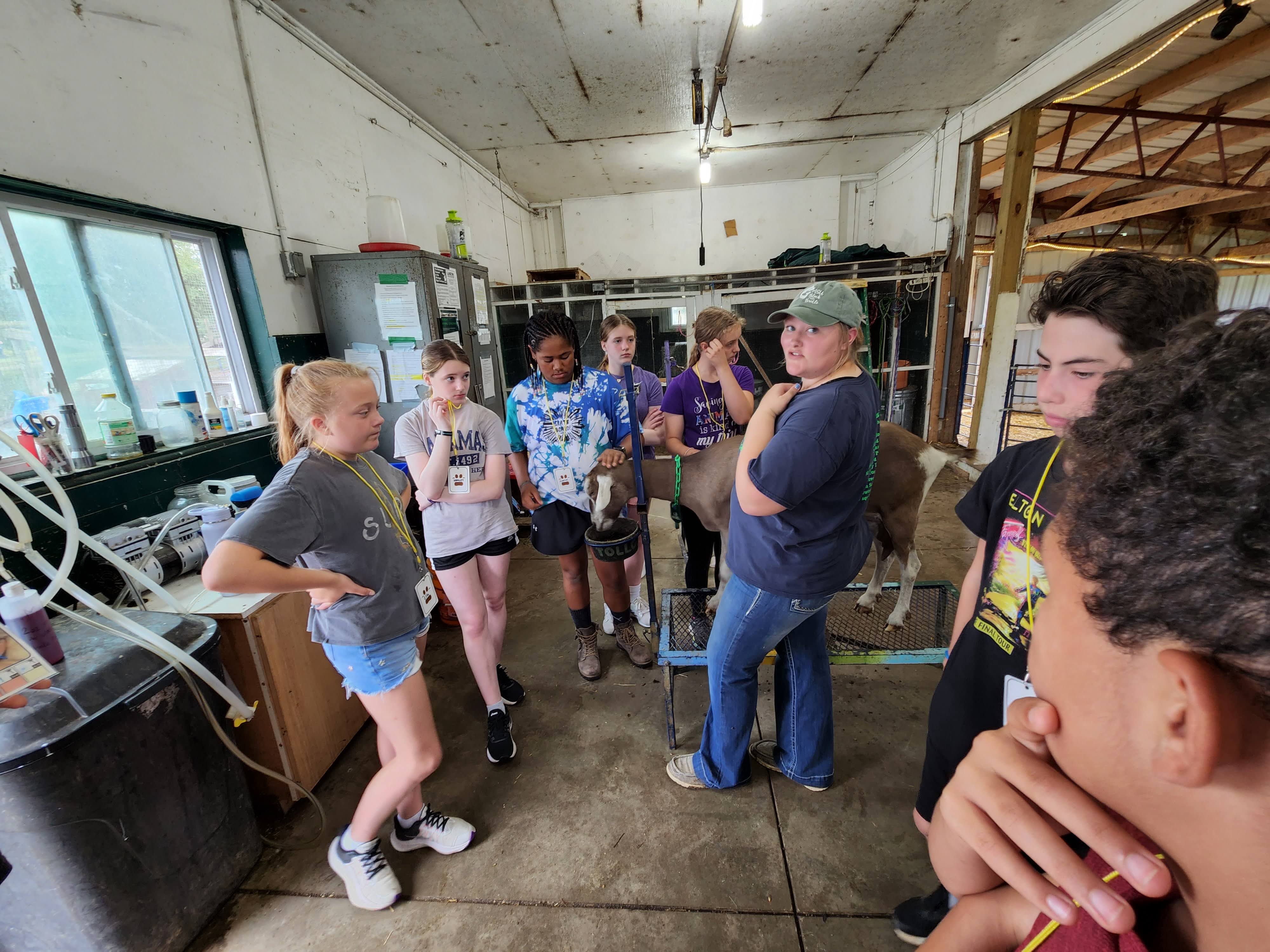 Vet Science camp was grateful to have 4H General Leader and Livestock Coordinator Mary Hutka and Farmer Apprentice Intern Jaycie join us to share about hoof trimming and mastitis testing. Related back to our Monday’s goat milking and mastitis case study, campers were able to milk and test the milk for any signs of infection. Mary mentioned the importance of rotational grazing and the farm’s plans to increase the use of rotational grazing to increase the health of the pastures and the animals. Jaycie then allowed campers the opportunity to help her use a Famacha card to test the color of the eyelid tissues to detect parasite load! 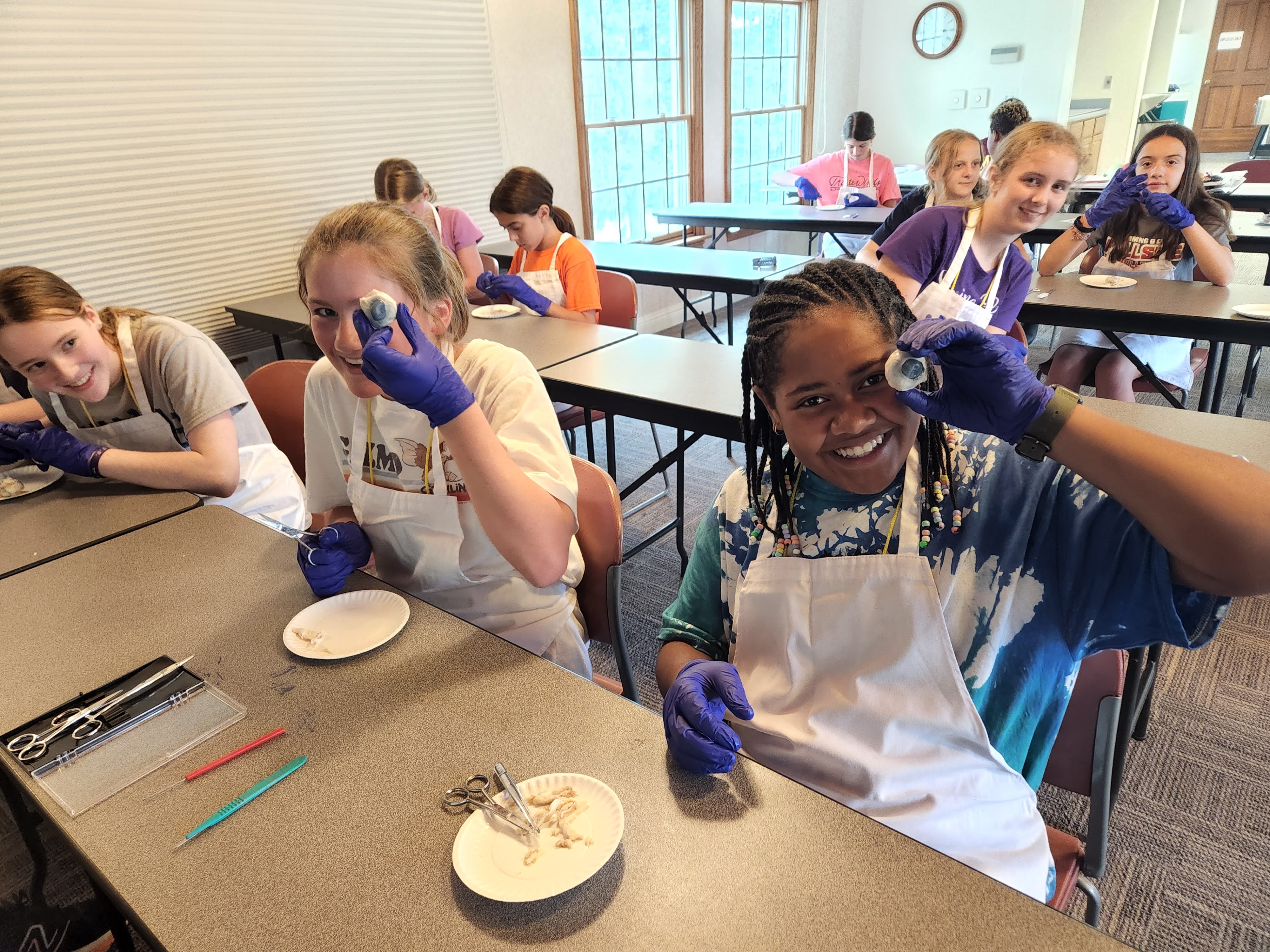 Our culminating activity for ruminant day was a cow eye dissection. Carefully following procedure step-by-step, campers were able to identify all the parts of the mammalian eye including sclera, the cornea, the optic nerve, the retina, the aqueous and vitreous humor and more. Campers were intrigued and careful as they completed the dissection using a scalpel, scissors, forceps, pick, tweezers, an apron and gloves.

All throughout the week, campers would stop for a quick game like Where’s My Chicken, Ready Set Defense Immune System Tag, Mafia, Poison Dart Frog, etc. Our strengths inventory allowed each in the group to hear the strengths that others recognize in them. As we gain awareness of our own strengths, we also understand better the collective strength of the group. All vet science campers, the Paw Prints and the Microscopes, were chosen to lead the whole camp through flag ceremony Friday. Campers enjoyed a special visit Friday morning from Ms. Ellen’s well-loved canine friend Teddy. Teddy soaked up the attention of the campers and ate his breakfast as campers enjoyed a garden kitchen snack of veggie and dip.

Campers hung out with our poultry at length on Friday because it was …Chicken Day! After using proper biosecurity techniques, campers not only harvested eggs and checked on their food and water, they fed them veggie kabobs they made during garden kitchen.

The chickens loved the treat, especially the peppers and carrots. Holding the hens, we observed normal behavior of the birds and compared and contrasted our roosters and hens. Referencing back to the topic of rotational grazing, campers viewed an excellent resource about the value and purpose of sound pasture management techniques. Campers were then given a template showing our farm pastures and, in pairs, they designed their own pasture management plan which they presented to the larger group.

Just before the end of the day, campers were able to do one more quick dissection during camp - an egg dissection during which we discovered the purpose of each part of the egg’s anatomy. Messy and hands-on, campers learned that the egg shell has 7,000 pores, that the chalazae anchor the yolk so that it remains suspended in the eggs, that the yolk provides all the food for the developing chick, and that the germinal disc which they spotted with their bare eyes, will be the very spot that the chick embryo will begin to form soon after the egg is laid. 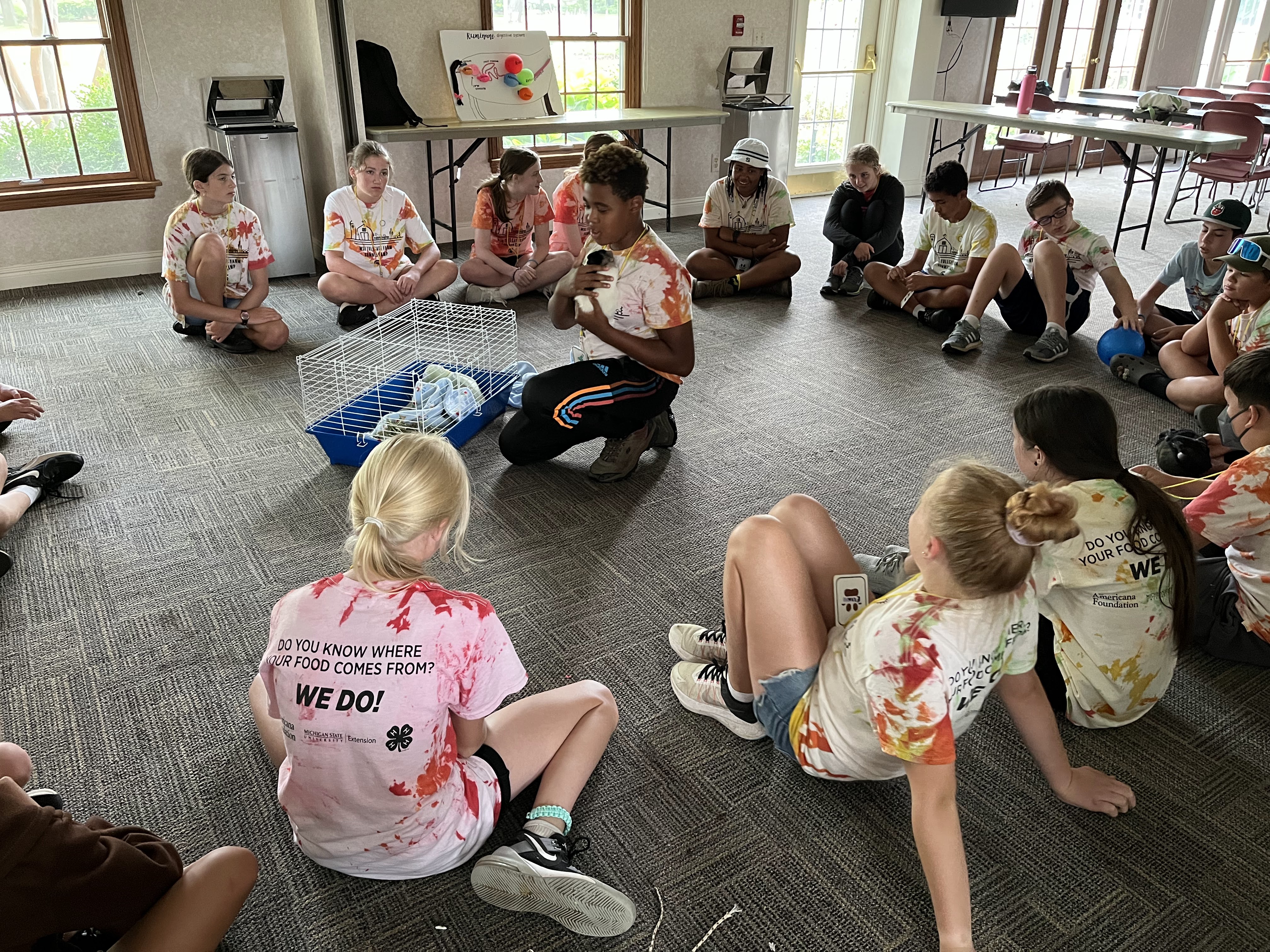 Campers met one of their fellow camper’s guinea pigs named Dandelion and Loretta and continued their work on their Junk Drawer Systems STEM projects. In small groups, they were assigned a species and a body system which they then researched and designed a model to use to teach others. Campers did an excellent job with their research and produced amazing models which they shared with parents and younger campers at camp closing. Vet Science Camp is intense, fun, and filled with learning, and we were grateful to have some of the strongest camper and steward groups ever for this year’s vet science camp! 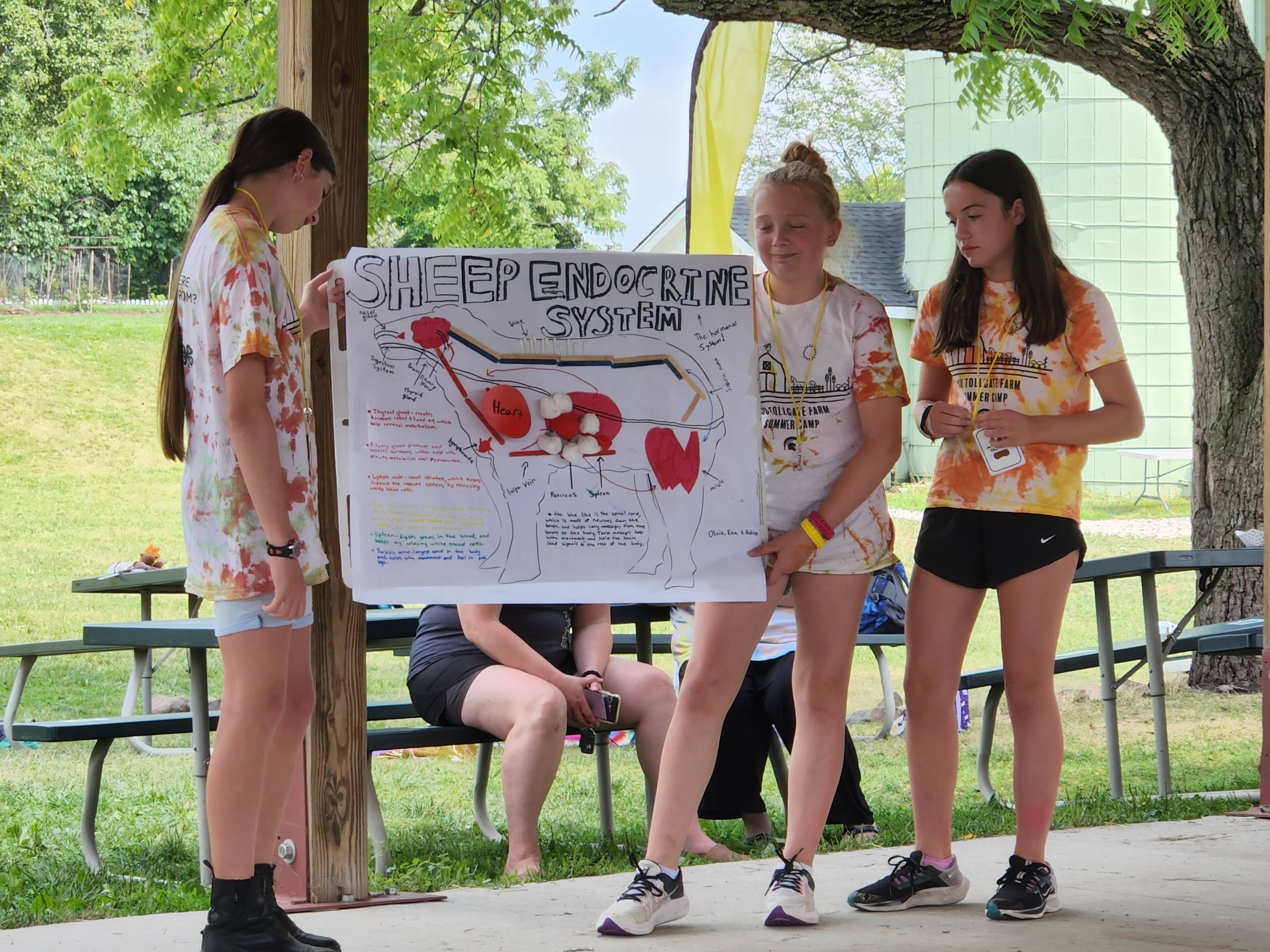 Be sure to check out more photos of Vet Science Week!