A team of researchers from MSU and Rice University has shown how farmers can save money on fertilizer while they improve their production of feedstock for ethanol and alleviate damage to the environment. 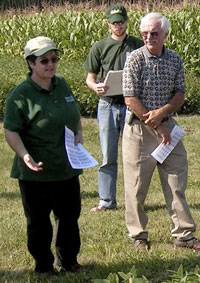 A team of researchers from Michigan State University MSU) and Rice University, including MSU AgBioResearch scientist Sieglinde Snapp , has shown how farmers can save money on fertilizer while they improve their production of feedstock for ethanol and alleviate damage to the environment.

The research results are featured in a recent issue of the American Chemical Society’s journal, Environmental Science and Technology.  Snapp, an associate professor of crop and soil sciences, who does research at the MSU Kellogg Biological Station, said that the research has implications for an industry that has grown dramatically in recent years to satisfy America's need for energy while trying to cut the nation's reliance on fossil fuels.

“In an era of increasing reliance on corn production for food and fuel, it is important to quantify the full impact of corn nitrogen management on the environment and on the crop biochemistry,” she said.

The team discovered that corn grain -- one source of ethanol -- and the stalks and leaves -- the source of cellulosic ethanol -- respond differently to nitrogen fertilization.  Liberal use of nitrogen fertilizer to maximize grain yields from corn crops resulted in only marginally more usable cellulose from leaves and stems.  Further, when the grain is used for food and the cellulose is processed for biofuel, pumping up the rate of nitrogen fertilization actually makes it more difficult to extract ethanol from corn leaves and stems.

This happens, they learned, because surplus nitrogen fertilizer accelerates the production of lignin, a molecule that must be removed before cellulosic ethanol can be produced from corn stems and leaves.

Fertilization also increases the decomposability of corn residue. This finding implies that soil carbon sequestration becomes less efficient with increased fertilizer use.  Research results suggested that even when corn is grown for grain, benefits of fertilization decline rapidly after the ecosystem’s nitrogen demands are met.  Heavy application of fertilizer yields minimal grain benefits and almost no benefits in residue carbohydrates, and it degrades the cellulosic ethanol feedstock quality and soil carbon sequestration (storage) effectiveness.

“These findings are an important next step in building a sustainable biofuel economy,” Snapp said.  “Though farmers have a clear incentive to maximize grain yields, the research shows a path to even greater benefits when corn residues are harvested for cellulosic ethanol production.”

In addition to support from MSU AgBioResearch, this research is funded in part by the National Science Foundation.