When the iconic MSC smokestack came down in 2011, it sparked a mourning period among the Spartan faithful.

When the iconic MSC smokestack came down in 2011, it sparked a mourning period among the Spartan faithful. Built in 1948 and abandoned in 1975, the smokestack that rose above the shadow of Spartan Stadium was an important part of the campus skyline. As the mortar that held the beloved landmark together weakened, it became clear that the smokestack had to go.“A little piece of me dies inside with every brick they remove,” one tweet read.

But with the end of every era, a new one begins. Energy production had been shifted to the T.B. Simon Power Plant, where up to 250,000 tons of coal were burned annually to power the needs of a growing campus population.

In April 2015, President Lou Anna K. Simon announced the beginning of yet another era when she declared that MSU would be coal-free by the end of 2016—the first university president to make such a bold declaration.

“Sustainability is one of our guiding institutional principles,” she said. “This represents a great opportunity for MSU to further reduce its environmental impact.”

While the Simon Power Plant moves to natural gas, thereby reducing emissions, another energy transformation is taking place in the heart of the south campus farms. There, an anaerobic digester eats more than 8,000 tons of dairy manure and 750 tons of postconsumer waste from campus dining halls as well as waste from a nearby Meijer distribution center a year.

Anaerobic digestion is a biological process that converts organic materials in the absence of oxygen (anaerobic conditions) into biogas. Methane (CH4) and carbon dioxide (CO2) are the primary gaseous components of biogas. Biogas can be burned to generate electricity and heat (steam) or purified and compressed for use as natural gas.

“Adding food waste boosts the energy production in the digester and helps us manage our footprint,” said Ann Erhardt, MSU director of sustainability. “Before, all that food waste was going to a landfill. That’s not sustainable."

After earning multiple degrees from MSU, Kirk joined the faculty at his alma mater. Energy is one area of interest. “Energy affects everything that we do in our daily lives. As an engineer in biosystems engineering, we see energy as one of the three key elements for a successful and thriving society. The others being water and food.”

FROM POOP TO PROGRESS

Dana Kirk, assistant professor in the MSU Department of Biosystems and Agricultural Engineering, said that anaerobic digestion also marries the needs of the campus farms with the university’s energy transition goals.

“When the campus sustainability plan was updated in 2011, it focused on reducing our energy footprint through recycling,” he said. “But there was no solution for organic waste. That’s why anaerobic digestion is so important.”

The south campus anaerobic digester has been producing about 400 kilowatts of energy per hour since October 2013. That’s enough to power one residence hall or 250 single-family homes. But energy production is only part of the goal. 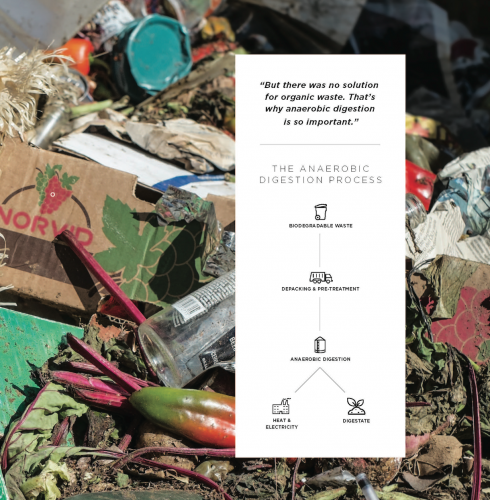 “We wanted to help reduce the environmental concerns with odor and manure management in livestock,” Kirk explained.

Now the digester treats all of the manure from the 180-cow Dairy Teaching and Research Center. Once the energy is pulled from the manure, it is stored, composted and eventually spread on nearby farm fields where it is used as a soil fertility amendment. The process retains the rich fertilizer value of the manure and reduces the odor.

“Having a farm on the outskirts of a city the size of Lansing is tough,” explained Rob West, manager of the dairy center. “We used to get odor complaints on a pretty regular basis, but we get far fewer now that we’re using treated manure.

Steve Safferman, an associate professor in the Department of Biosystems and Agricultural Engineering, isn’t surprised. He helps farmers and others find ways to change their energy footprint while lessening their impact on the environment.

“The motivation to put in a digester is not just pure energy production—it’s often other issues, such as waste management and odor reduction,” he said. “If we’re going to be truly sustainable, we have to stop thinking of things as waste and start thinking of them as resources.”

Safferman believes this challenge will best be met by ensuring that alternative energies are not only environmentally friendly but profitable.

“If we want this industry to survive and thrive, the cost of producing energy from alternative sources has to come down,” Safferman said. “Everybody was really excited about alternative energy in the 1970s when energy prices were high, but when prices fell, interest dwindled. If we’re going to really focus on reducing waste by turning it into energy, it has to be economical for the energy producers.”

Safferman and his team are creating screening tools that utility companies, water treatment plants, policymakers and private businesses can use to determine if it is feasible to produce energy from resources formerly thought of as waste.

“Keeping things out of the landfill isn’t enough to facilitate change methods have to be profitable,” he said.

Safferman’s research looks at taking high-strength waste—such as fats, oils and grease—out of sewer systems and finding a low-cost way to use them in power-hungry situations such as water treatment plants. This generates power from the waste itself. The same can be done on farms, where energy can be squeezed out of manure and used to light barns and milking parlors and meet other farm needs.

“Even if businesses want to follow their instincts and protect the environment, they still need to remain competitive,” Safferman said.