If you asked a young Rufus Isaacs what he thought he would be when he grew up, he might have said, "a doctor."

If you asked a young Rufus Isaacs what he thought he would be when he grew up, he might have said, ”a doctor.”

“I thought I would be a doctor —I was always interested in biology and medicine—but when I got to the point of thinking about actually practicing medicine, I couldn’t see myself doing that,” he said.

Isaacs, who grew up in St. Ives in the rural western part of England near the ocean, attributes some of his interest in science to that environment, but he stops short of describing himself as a kid who knew he was headed toward studying bugs for a living.

But if he’s learned one thing, Isaacs said, it's “Never say never.”

Fast-forward to Isaacs’ undergraduate experiences at Imperial College in London, where he learned biology and ecology from professors who were entomologists. His undergraduate program also included paid internships in the agricultural sector studying daffodil insect pests and weed control infield crops.

“My early training taught me that insects were fascinating but could also be devastating. I learned the theory of insect ecology and also its practical application through development of IPM techniques,” he said.

Rufus Isaacs, Tom Gennara and Kraig Ehm talk about the inaugural cover photo for In the Field, how it was achieved and what it felt like to be pelted with pollen -- or cornstarch -- for a few hours.

An ocean away and 20-plus years later, Isaacs leads one of this country’s largest studies of nativ“I wasn’t working on bees when I started at Michigan State,” he said. Isaacs’ work is focused on the ecology and behavior of insects in perennial fruit crops. He studies insects that are pests, natural enemies and pollinators within Michigan’s agricultural systems and surrounding landscapes.

It wasn’t until a graduate student from Colombia, Natalia Botero-Garcés, came to campus and began telling Isaacs about the beauty and importance of bees that he started to think about adding research on pollinators to his program.

Then, another graduate student, Julianna Wilson, started working on pollinators in Michigan blueberry fields right before colony collapse disorder (CCD) started to make the news. (Colony collapse disorder: the phenomenon that occurs when the majority of worker bees in a colony disappear. CCD causes significant economic losses because many agricultural crops worldwide are pollinated by western honeybees.)

“I would credit those two students for really opening my eyes to how interesting and important bees are as pollinators for Michigan crops. They wanted to work in that area, and blueberry growers were very interested in making sure their crops were well-pollinated, and so we started counting, collecting and identifying bees,” Isaacs said. “I was fortunate to be in the right place at the right time.”

Isaacs credits ”right place, right time” for most of the success in his work. And, Michigan growers are benefitting from Isaacs’ being at MSU right now. 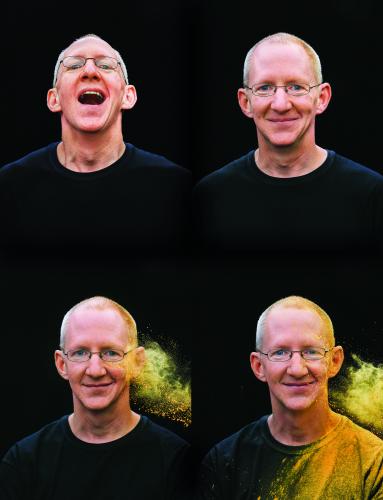 “The return on investment for getting flowers well-pollinated is compelling to fruit farmers,” he said. “Solving problems with them through my research and extension job is very rewarding, It allows me to collaborate with people from all different walks of life—and makes every day different,” he said.

When asked what he loves about his work, Isaacs consistently points to his MSU Extension appointment as a way to interact with Michigan’s berry growers and other farmers.

He’s also noticed a big uptick in interest from gardeners. “They are interested in what they can do to help support bees—they want to learn about ways to improve habitats for pollinators,” he said.

He thinks students are starting to hear this, too, and choosing to study pollinators.

“Students are interested in the work that’s going on here,” Isaacs said. “They come to MSU and find an encouraging place to do applied research, and it’s great to see those students succeed. It’s one of the most satisfying aspects of being here.”

Those students likely find a leader who is consistently willing to listen to their ideas and direct them toward finding their niche in the world of entomology.

“People say you have to make your own luck,” Isaacs said. “But I have been lucky to work with berry crops that are so important in people’s diets, and there is worldwide interest in conserving pollinators right now.”