Students and Supporters Save CANR's Polar Bear Through Online Fundraising

A polar bear has guarded the Natural Resources Building at MSU for almost 50 years, watching over and welcoming students as they navigate their way through the halls.

A polar bear has guarded the Natural Resources Building at MSU for almost 50 years, watching over and welcoming students as they navigate their way through the halls.

During that time, the well-loved bear was considerably damaged by daily wear and tear, as well as some unfortunate mishaps that resulted in holes in its chest and missing claws and pads on its feet.

“The bear was in really bad shape — we either had to get rid of it or refurbish it,” said Scott Winterstein, professor and chairperson in the MSU Department of Fisheries and Wildlife. “When I discussed this with people, they were aghast at the thought of getting rid of it. I told them what it would cost to refurbish it—about $6,000—and they would say, ‘I’d put in $25 toward that.’”

Those responses have prompted Winterstein to informally survey others, where he kept getting the same response: “You can’t get rid of the bear—I’ll donate.”

Winterstein went to Samantha Adler, development officer, to raise the amount needed to refurbish the bear. Adler suggested using MSU’s Crowdpower, an online giving site. “Online funding works better when you can tell your story visually and create impact with few words,” Adler said. Since the polar bear’s story was compelling, CANR decided to use it as the college’s first try at online fundraising.

“People donated and shared their memories of seeing the bear when they took classes there,” Winterstein said. “Someone sent us a photo of himself with the bear when he was a little boy. It has always been a popular spot for kids to see.”

Adler said that the outpouring of support came from unexpected places. “We ended up touching all these people who weren’t involved in fisheries and wildlife, natural resources or agriculture but who knew the polar bear just from having classes in the Natural Resources Building,” Adler said. “This was a great campaign. It brought in new donors, created excitement, had great marketing and was picked up by many news outlets.” 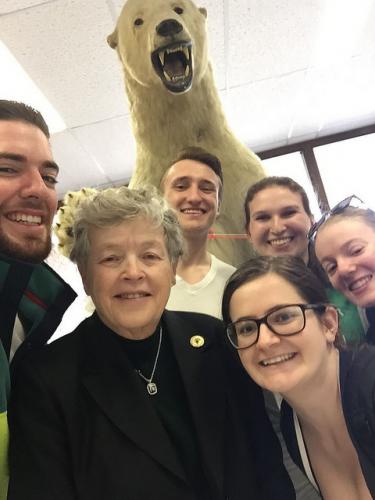 “We created so many connections and were able to raise the funds in a shorter period of time than we thought,” Winterstein said. “Once word got out, it just rolled—this was definitely the way to do it.”

The smallest individual donation was $1 and the largest $500, with nearly 160 people donating to the campaign. One of the biggest donors, however, learned of the Save our Polar Bear campaign through more traditional means— The State News. Not long afterward, Winterstein got a visit from an MSU alumna who had read about the bear in the State News.

She said that, “she loved polar bears and asked how much more we need for the polar bear,” Winterstein said. “I explained that the money was going just for that one polar bear, and she told me she understood and that it needed to look dignified. She ended up donating $500.”

Using multiple platforms to promote the online fundraising campaign inspired younger people to give what they could as well as promoting the effort.

The student-run undegrauate Fisheries and Wildlife Club donated $2,200 through sales of “Save the Spartan Polar Bear” T-shirts and donations. Both of the undergraduate and graduate clubs worked together to spread the word about the restoration campaign.

“This whole campaign was student-driven,” Adler said. “And our students were the ones who asked MSU President Lou Anna K. Simon to take a selfie with the polar bear.”

Thanks to their commitment and the donations of supporters far and wide, MSU’s beloved polar bear is home again and will continue to welcome students and the public into the next century.

PRESERVING THE POLAR BEAR
Want to see how the polar bear was restored? Check out our Did you Know? Video at

Maybe you just want to learn more about this guy and what he means to the Department of Fisheries and Wildlife, if so, visit: fw.msu.edu/save_our_polar_bear