The Clarence E. Lewis Landscape Arboretum was dedicated on July 10,1984 as a "Learning Experience in the Making". It is designed as an instructional arboretum for students interested in landscape development. The site has its beginnings as the old campus nursery and as a result many remaining specimen trees lend a mature appearance to much of the arboretum. The arboretum continues to grow, providing learning opportunities for students, industry professionals, gardeners, and community members. 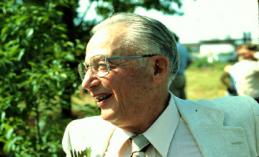 "Let our imagination run a bit, don't just concentrate on the ground, look up to enjoy what is overhead, look through the foliage, the canopies, look to the area beyond, see the patterns, the pictures, the twisting and turning of the branches.... Remember that trees can do so many things in a garden.... Remember trees are for you!"

The late Clarence E. Lewis once suggested that " an arboretum should be named after a tree or a person who has stimulated others to become enthralled with the wonders of the plant world." He was certainly one of these... a person who inspired thousands to seek out the fascinating world of plants. Clancy Lewis was known for his devotion to horticultural excellence and for his positive influence on students, nurserymen/women, landscape architects, and the public in developing an appreciation for landscape plants. As an accomplished landscape horticulturist and professor emeritus in the MSU Department of Horticulture, Clarence E. Lewis certainly was deserving of having the landscape arboretum named in his honor. 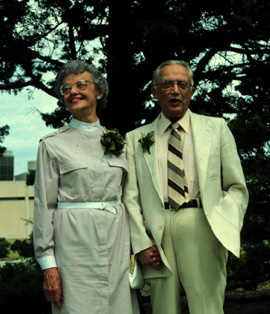 Clancy was thrilled and honored to be present at the dedication of the Clarence E. Lewis Landscape Arboretum on July 10, 1984. He passed away in 1985, but his legacy lives on. He was respected nationally for his professional expertise in ornamental horticulture, and he contributed thousands of articles and photographs to leading horticulture and trade publications. He gave slide presentations to numerous horticultural and other audiences, and these illustrated lectures were legendary. Teacher, writer, scholar, communicator, gentleman and friend were only a few of Clancy's roles. He taught for 35 years and won citations from MSU and the American Horticultural Society for being an outstanding and devoted teacher. His work earned him other prestigious awards, such as the Arthur Hoyt Scott Garden and Horticultural Award and the Award of Merit from the International Society of Arboriculture. He was also selected as a fellow of the Garden Writers' Association of America. Clancy was recognized for his outstanding contributions to gardening as a science and an art. The artistry found in his landscape designs, articles, presentations and photographs complemented his brilliant scientific accomplishments. Clancy accentuated the art and science of horticulture by teaching us how to preserve and develop our passion for plants.

The Original Master Plan of the Clarence E. Lewis Landscape Arboretum was developed during the summer of 1983. It was planned as a collection of landscapes that were developed in such a way that students can refine their skills and visitors can walk away with ideas.

The Plant Walk features plants in the Clarence E. Lewis Arboretum that are planted as a living memorial or to recognize service.

A Learning Experience in the Making

Michigan State University's superb horticultural display is a prominent feature of the campus. A special addition to this outstanding landscape is a burgeoning area that many are fondly acquainted with - the Clarence E. Lewis Landscape Arboretum. As you travel south down Bogue Street, look to your right and as you approach Service Road, there lies a seven-acre parcel of land. You may remember this westward stretch as the old campus nursery. 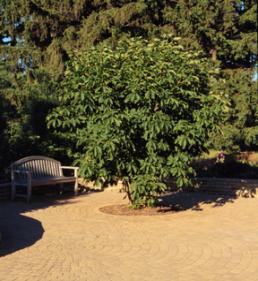 Many remaining specimen trees lend a mature characteristic to this site. This quiet oasis of green changes through the year, offering a spectacular scene in every season. In springtime, the redolent trail through the flowering magnolias, viburnums and witchhazels accentuates a spectacle of pastels. Dogwoods, crabapples and spiraeas offer their characteristic white, pink or purple blossoms. During the summer, compare and contrast foliar textures and numerous shades of green. Yellow, red and russet tones abound in the fall. The laciniated leaves of the magnificent sumac glow in shades of gold and crimson in September. In the wintertime, the prominent forms of deciduous trees and shrubs stand out against backdrop of snow-laden evergreens.

What distinguishes the Clarence E. Lewis Landscape Arboretum from others is that it serves as an instructional arboretum for students in landscape horticulture. Dedicated as a "learning experience in the making", the arboretum has as its primary function to maximize students' exposure to and participation in landscape design, construction and maintenance. Here students can integrate classroom theory with "hands-on" landscape field practices.

Education is at the heart of the mission, in that our efforts are directed towards:

Establishing an avenue for the introduction and evaluation of new plants for Midwestern landscapes.

The development of the Clarence E. Lewis Landscape Arboretum is a commitment by the landscape horticulture faculty at MSU to maintain a comprehensive educational program. This project depends primarily upon contributions from alumni, industry and friends of Michigan State University. Contributing to this effort is an investment in the education of professional landscape horticulturists, in MSU, in the future of the landscape and nursery industries, and in the beautification of Michigan.

In 1987, a scholarship program was established with the Department of Horticulture to recognize Brian L. Vidosh, a long-time member of the landscape and nursery industry and an alumnus of Michigan State University. Brian was a strong supporter of education. Because of his love for landscape horticulture and his commitment to education, Linda Vidosh (spouse) and Donn Vidosh (partner and brother) established the Brian L. Vidosh Memorial Scholarship Fund. The scholarship is an endowed fund, with the interest used to grant intern experiences in the Clarence E. Lewis Landscape Arboretum. Proceeds from the fund have been awarded to students serving as arboretum designers, managers, and technicians.

The Yvonne V. Wilson Endowed Fund in the Clarence E. Lewis Landscape Arboretum is established with gift annuities from Yvonne V. Wilson. Yvonne graduated from MSU in 1952. She is a self taught naturalist and horticulturist who has traveled extensively throughout North America from Alaska to the Sonoran Desert of Arizona, studying and photographing the various plant communities. It is because of her love of horticulture that she has established this endowment to provide for the Wilson Intern(s) so that tomorrow's students will be able to continue to learn and experience the world of plants and develop an appreciation for and understanding of horticulture.

Parking is now available (for a fee) in the visitor lot located on Service Road between Farm Lane and Bogue Street. Parking is also available in out MSU Horticulture Garden visitor lot, south of the Plant and Soil Sciences Building on Bogue Street and Wilson Drive.

Open all year, dawn to dusk. Admission is free.