On the decline: Studying eastern massasauga rattlesnakes in Michigan

From the common garter snake slithering through gardens to the elusive fox snake hailing from the pine forests of the Upper Peninsula, Michigan is home to 17 snake species. Only one, however, is venomous — the eastern massasauga rattlesnake. This particular snake is also the only one in Michigan to have a triangle-shaped head and a rattle on the tip of its tail.

Found in multiple isolated pockets throughout the Lower Peninsula and inhabiting a range from southern Ontario to Iowa, the snake occupies an important niche in the ecosystem. It feeds on a steady diet of amphibians, small mammals and other snakes, and in turn is prey for hawks, owls, cranes and some mammals.

Those hoping to catch a glimpse of this snake, however, are in for a challenge. In addition to dwelling in damp, grassy wetlands and being characteristically shy by nature, the snake’s population has begun to dwindle. As more and more wetlands are developed, the snake’s habitat has been significantly reduced.

Although Michigan is now the only state where it is not listed as an endangered or threatened species, the eastern massasauga rattlesnake is fast becoming a rare sight here, too. Numbers in Michigan have fallen by about 33 percent from their historic levels, according to the U.S. Fisheries and Wildlife Service. Michigan State University (MSU) AgBioResearch wildlife ecologist Henry Campa III and MSU colleague Gary Roloff hope the species can begin its population recovery in Michigan.

“The massasauga is what we call a species of special concern,” Campa said. “People are concerned for its population status, and the best way to help conserve it is to learn about it in places, like Michigan, where its numbers are relatively higher.”

Campa and Roloff, both faculty members in the MSU Department of Fisheries and Wildlife, want to determine why the snake has been able to survive better in Michigan. Their team spends May through August wading through the marshlands and along the riverbanks of the southwestern Lower Peninsula in search of the elusive reptiles.

Upon capture, the snakes are taken to the John Ball Zoo in Grand Rapids, where collaborating veterinarians implant each with a radio transmitter. After a couple days of recovery, the snakes are released back into the wild at their point of capture.

“Once they’re back out there, we track them every day,” Campa said. “By radio-telemetering the rattlesnakes, we can evaluate their survival and what habitat conditions they use, as well as develop standardized survey methods. We monitor as many as we can find and telemeter.” 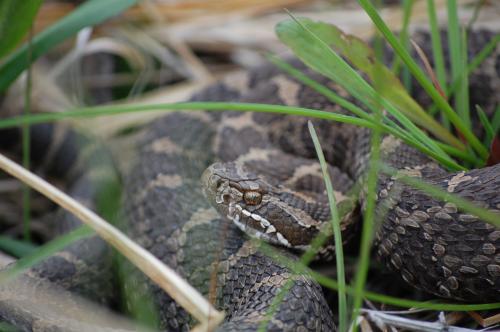 The researchers want to get a handle on not only current populations, but future ones as well. They use a portable ultrasound machine in the fi  to study pregnant females.

“The ultrasounds can not only tell us how many offspring there are but can also register their heartbeats and help us determine how many of them are viable,” Campa explained. “Knowing the vital rates of the population is important because that tells us if the population is on track to stay viable over the next 50 years.”

Using the radio transmitters, Campa and his team can track the snakes after they’ve given birth in early August. This helps to confirm the population projections.

Tracking the snakes enables Campa to determine the habitats in which they thrive. In a 2011 study published by Campa and his former graduate student Robyn Bailey, the researchers found that eastern massasauga rattlesnakes had better survivability at the Pierce Cedar Creek Institute, a 661- acre nature preserve near Hastings, than elsewhere in their range. The researchers believe this is due to large areas of open- canopy vegetation that lack signifi human infrastructure.

Catching the snakes also aff  the team the opportunity to collect valuable blood and tissue samples, which are used to investigate a relatively new threat to the species.

“There’s growing interest in snake fungal disease,” said Stephanie Shaffer, Campa’s graduate student, who is researching the eastern massasauga rattlesnake for her doctoral degree. “It’s potentially fatal to snakes, but not a lot is known about it. We’re hoping the samples we take this season will help us determine its presence in Michigan.”

By studying the snake in places that support larger populations of eastern massasauga rattlesnakes, Campa ultimately hopes to be able to gather knowledge that can be applied to places where the snakes are struggling.

“With respect to understanding the population’s vital rates, our methods are applicable to the species’ entire range,” Shaffer said. “That’s potentially very helpful for regions where the species is endangered.”

The vitality of the eastern massasauga rattlesnake varies greatly throughout its geographic range. By building a clearer picture of the environment in which the species thrives, Campa and his team are helping researchers identify how to bring the species back from the brink of endangerment.

“There’s a huge variability in their  survival, depending on factors like habitat, temperature and human presence,” Campa said. “We’re trying to learn more about how those factors affect the species so we can manage for it as effectively as possible.”