We are excited to gear up for our first-ever online spring plant sale. We hope to raise some much-needed funding for the gardens while providing you with some fantastic plants in the process! Here are some of my favorite varieties on offer:

I generally don’t get particularly excited about Impatiens, but the Beacon series (pictured above) is a game-changer! Prior to the spread of Impatiens Downy Mildew (IDM) around 2013, Impatiens walleriana (often referred to as seed impatiens) was a staple shade annual. In fact, they were once the third-highest value floriculture crop in the US, behind Petunia (#1) and Pansy/Viola (#2).

However, once IDM reared its ugly head, both greenhouse growers and consumers shied away from seed impatiens. Since 2013, plant breeders have been working behind the scenes, developing IDM-resistant cultivars. We know that our soil at the MSU Gardens still harbors the IDM pathogen. During the last two trial seasons, we evaluated two
new series of IDM-resistant seed impatiens. When planted alongside older, pre-2013, varieties, the difference in survivability and performance was like night and day! If you’ve been itching to get seed impatiens back in your shade garden, the time has come! 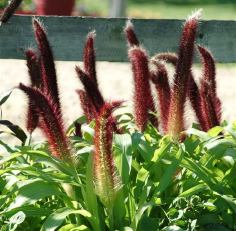 Jade Princess is an annual ornamental millet variety with mounds of chartreuse foliage and flamboyant reddish-brown flower plumes. If you know me as a gardener, or have ever attended one of my talks on garden design, you know that I love chartreuse in the garden! It’s a color that goes well with everything and can really brighten up bland combinations. I’ve also started to branch out more in my use of annual ornamental grasses during the last couple years. I used to stick to mostly Pennisetum varieties (like the highly popular purple fountain grass), but I have more recently found an appreciation for ornamental corn and ornamental millet, as well as some of the smaller annual grasses such as the many colorful and texturally diverse Carex varieties. 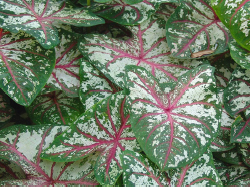 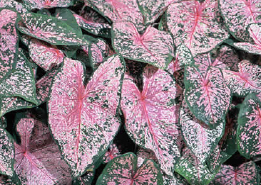 Caladium provides a tropical look in your garden with their large showy leaves. Some are sun tolerant, while others need a shady spot, so make sure you pick a variety that suits your location. We have only offered this plant a couple of times in the last 8 years, so make sure to get some of this specialty item while you can! Greenhouse-grade Caladium tubers must be ordered many months in advance and are usually cost-prohibitive for us to purchase. However, we were able to acquire some extra tubers from a researcher on campus and are happy to pass our good luck along to you!