In villages throughout Hungary, the tart cherry is a common tree in backyard gardens and along the sidewalks and roadsides. The Hungarians vegetatively propagated their favorite variety either by budding or grafting. As a result, numerous clonal types appeared. Many of these local types were similar to Pándy in that they had excellent quality fruit. 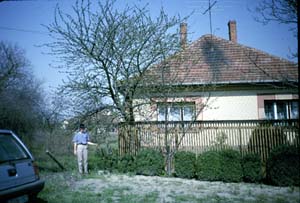 After World War II, the Hungarian fruit scientist Dr. Maliga Pál initiated a project to identify superior tart cherry varieties among the numerous landrace types present in the villages. With the help of colleagues from various Fruit Stations across Hungary, Dr. Maliga Pál amassed a collection that was planted in Érd. The most promising variety in this collection proved to be the variety named Bunched of Újfehértói, which was a local variety collected in the village of Újfehértó by Ferenc Pethõ, Tibor Szabó, and Bertalan Pusztai from the Újfehértó Fruit Station. Bunched of Újfehértói was released as a commercial variety in Hungary in 1970 and now represents at least 30% of the Hungarian tart cherry production.

In 1981, Dr. Amy Iezzoni initiated a breeding program at Michigan State University with the goal of identifying and developing new superior tart cherry varieties with improved fruit quality and disease resistance. One of the first activities Dr. Iezzoni undertook was to visit the ancestral home of tart cherry to meet other tart cherry breeders and to determine what natural variation was present in tart cherry. In 1983 she traveled to Yugoslavia, Bulgaria, Romania, Hungary and Poland. Impressed with the tart cherry germplasm and advanced tart cherry breeding in Hungary, Dr. Iezzoni returned to Hungary in 1984 and subsequently introduced numerous varieties to the U.S. for tests in the MSU breeding program. Contacts between the MSU and Hungarian programs continued with two cycles of funding provided to Hungary from the USDA Hungarian Joint Fund and the MSU sponsored program of student training.

After years of testing, researchers from Michigan State University and the Institute in Hungary decided to jointly release Bunched of Újfehértói in the United States under the new trademarked name Balaton®, chosen to celebrate its Hungarian heritage. The release agreement stipulates that for every Balaton® tree sold in the United States, half the tree royalty (25 cents) is returned to Hungary. This royalty income is being shared between the Enterprise for Fruit Growing at Érd and the Fruit Station at Újfehértó to support continuing efforts in tart cherry breeding.

History of Tart Cherries in Hungary

The tart cherry is native to the Carpathian Basin where it is a common wild and cultivated tree. In the Hungarian language, sweet and tart cherry have very different names suggesting that the early Hungarians distinguished between these two related fruit types. The Hungarian name for sweet cherry is cseresznye, while the name for tart cherry is meggy. Meggy is presumed to originate from the word mol which means a berry from a mountain plant (Faust and Surányi, 1997). The large number of locations with tart cherry in their name such as Meggyespatak (cherry creek) suggests that locations with native tart cherries were widespread.

The first cultivated landrace variety of tart cherry in Hungary is named Pándy. It was believed to have been discovered along the river Körös, which flows from the Carpathian Mountains of Romania to the Hungarian river Tisza. Whether Pándy is the name of a person who first discovered this variety or whether it’s named after the village of Pánd is unclear. However, since its identification in approximately 1848, Pándy was vegetatively propagated and distributed across the countryside.

“Dr. Miklos Faust (1927-1998), American-Hungarian and fruit scientist with the U.S. Department of Agriculture, was a source of inspiration, encouragement, and assistance. I proudly dedicate the release of Balaton® tart cherry to Dr. Miklos Faust, an outstanding scholar, humanitarian, and colleague.” Amy Iezzoni