The following was originally posted on the website of the National Farm To School Network on August 26th, 2016.

All the milk served at Hart MSHS in Hart, Mich. now comes from within 15 miles.
Migrant and seasonal farmworkers are the backbone of the United States agriculture industry. Despite being essential to production in the modern food system, evidence suggests that these farmworkers and their children struggle with accessing nutritious food and face a variety of health concerns tied to poor nutrition. The Migrant and Seasonal Head Start (MSHS) program, founded in 1969, was created to help address unique challenges like these faced by farmworker families. The program provides an equitable approach to addressing the lack of available childcare options for low-wage earning farmworkers and support families that face barriers in accessing necessary services. Now in 38 states, MSHS programs operate during peak agriculture season and provide essential education, nutrition, and support services to more than 30,000 young children.

Throughout 2014 and 2015, the Migrant and Seasonal Head Start Collaboration Office and the Michigan State University Center for Regional Food Systems Farm to School program collaborated on research and outreach to better understand the interest in, motivation for and barriers to implementing farm to early care and education (ECE) initiatives at MSHS sites. Key efforts included surveys of 42 directors and coordinators at MSHS programs in Florida, California and Washington, along with surveys of parents attending a farm to ECE session at the National Migrant and Seasonal Head Start Association’s Annual Conference in 2014. Surveys found that interest in pursuing farm to school activities – particularly local purchasing – was high, and that because of natural connections to local agriculture, some farm to ECE activities are already taking place.

Directors and parents alike recognize the great potential of farm to ECE. All 42 directors surveyed expressed interest in developing farm to ECE activities, and 39 believed that buying locally produced foods would improve the quality of meals served at MSHS sites. The top three motivators reported for encouraging farm to ECE in their programs were:

Other frequently cited motivators included providing access to fresher or higher quality foods for children and expanding food access. Additionally, all parents surveyed reported interest in supporting farm to ECE initiatives at the center where their children attended.

Another benefit of farm to ECE in MSHS programs is its natural connection to family ties with local farms. Most of the directors reported some level of local sourcing already taking place through donated produce from farms employing migrant labor. Directors appreciate these relationships because, in addition to getting healthy, local food into meals, they create connections between children and the work of their parents. Both directors and parents reported seeing potential in sourcing more from these farms.

With interest high, now is an opportune time not only to expand farm to ECE outreach to MSHS, but to address the barriers to entry for MSHS programs. The top three barriers noted by survey respondents were: 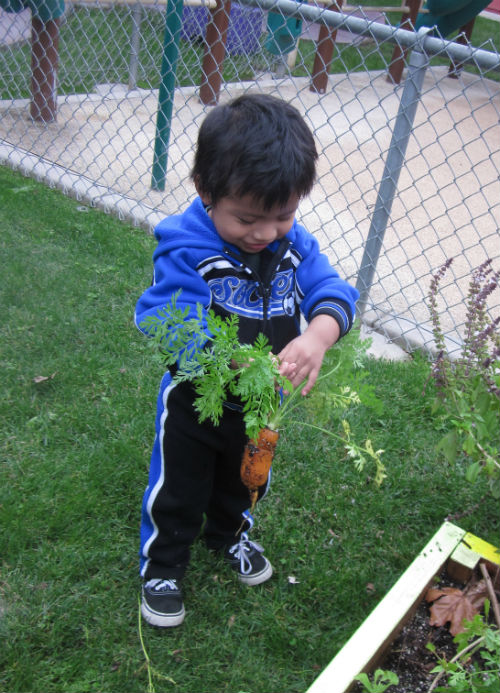 Though shifting current institutional purchasing policies and practices can take time, efforts could be made to educate MSHS programs on local product lines available through their current purchasing avenues, which include broadline distributors and local grocery stores.

Across the country, farm to ECE support organizations are helping MSHS programs strengthen their local purchasing efforts. In California, the Community Action Partnership of San Luis Obispo County, which runs MSHS programs in nine counties, has created a farm to ECE position to increase local purchasing in their centers. In Michigan, the MI Farm to School Grant Program has provided funding to four MSHS centers to assist with changing purchases practices that increase access for children to fresh, healthy food. This has resulted in a network of MSHS programs that will be able to share best practices and strategies for finding new procurement sources and developing connections with new local suppliers, and in turn, positively affect children’s’ access to local food and nutritional meals.

The interest in and motivation for farm to ECE revealed in this research is impetus for increasing outreach and engagement in the 38 states where MSHS operates. By reaching out to MSHS programs interested in farm to ECE and supporting them with technical assistance and resources, we can support good food access for some of the country’s most vulnerable children. The Cultural Relevancy Ad-hoc group of the National Farm to School Network Farm to Early Care and Education working group, along with other initiatives, are aiming to increase outreach and engagement to MSHS centers and highlight stories of MSHS farm to ECE successes. Connecting MSHS programs with local and state farm to ECE support organizations can support the creation of successful local purchasing strategies and increase good food access for vulnerable children and families of migrant and seasonal farm workers.

For more information on the surveys, trainings or to become involved in the Cultural Relevancy Ad-hoc group, contact Abby Harper, Farm to School Specialist at MSU Center for Regional Food Systems at harperab@msu.edu

Learn more about farm to early care and education.

Subscribe to the MSU Center for Regional Food Systems newsletter to receive updates from us in your inbox.

Give to the MSU Center for Regional Food Systems.

Racial Equity in the Food System: Perceptions, reality, and the road ahead