Tye Thompson interviewed and featured in a national trade magazine

Tye Thompson, and MSU Horticulture student, was featured in a national trade magazine, American Vegetable Grower.  His farm is 15 acres, located in Dundee, MI. Tye uses what he learns in class and tries it on his farm.  The result is a surprisingly sophisticated growing operation that includes plasticulture, strip tilling with cover crops, a 2,160 square-foot greenhouse with fertigation, climate control, and air circulation.

His MSU studies have taught him a lot.  “I have been using a little bit of drip irrigation in my greenhouse as well as in some crops in the field under plastic mulch. I learned a lot about drip and all other irrigation practices from a great irrigation course that MSU offers taught by Marcus Duck [Advisor and Instructor at MSU and Institute of Agricultural Technology Program Coordinator].”

But his own growing experience is a great teacher too. “The first time I tried to plant pumpkins into killed winter rye it worked good. But it needed some improvements,” he says. He made those improvements the next year which included strip tilling, where the cover crop is left in place, but a narrow furrow is tilled for the seed line. It’s just wide enough for proper planting.“It makes a nice seed bed for the pumpkin seeds. They can germinate quickly, and I have little problems with the birds,” Thompson says. 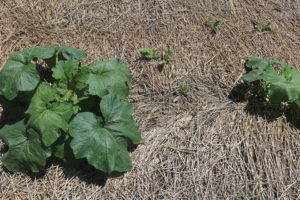 This news article was adapted with permission from the original full article: His Farm is His Research Lab, American Vegetable Grower Magazine.

Find out about MSU certificate programs!