A social network for plant science

David Kramer’s laboratory is reminiscent of a start-up business, a convergence of diverse minds and skills with the same end goal — to improve plant science. His group is looking to solve some of the worldwide challenges related to human population growth and the need for more food. Achieving that lofty objective requires innovation.

Kramer, the John A. Hannah Distinguished Professor in Photosynthesis and Bioenergetics, leads a team of scientists, engineers and software developers in a project called PhotosynQ that is changing the way farmers and researchers think about collaboration.

About 10 years ago, as a faculty member at Washington State University, Kramer had an idea.

“We were talking with some people from Botswana, Africa, where there is a very arid climate,” the Michigan State University (MSU) AgBioResearch scientist said. “We had some non-invasive ways of seeing how the plants were doing, but the instruments you need to do that cost tens of thousands of dollars. That may be more than the entire budget of their institution. At that time, I had been developing instruments for probing photosynthesis for quite some time. I thought, ‘Wow. Wouldn’t it be great to get these things to everybody?’”

Growing better crops using new management strategies relies heavily on how researchers approach information collection and analysis, particularly with small-scale farming. Kramer indicated that there is a ready market for affordable equipment that allows growers to make predictions about their crops.

The idea of producing such a device is one thing; making it happen is quite another. Once he arrived at MSU, Kramer hired PhotosynQ co-lead Greg Austic, an expert on new approaches to open-source and community-based solutions. Together they assembled a team to harness new technology that has increased the speed of product development and deployment while decreasing the cost.

There have been a few versions of the instrument thus far. Currently, researchers are using a beta prototype called MultispeQ, a handheld device that connects via Bluetooth to a smartphone using an Android operating system.

The MultispeQ instrument, which costs around $100, includes sensors that measure the temperature of plants, relative humidity, carbon dioxide, chlorophyll content and several other facets of plant health. Adaptability is essential, so the sensors can be easily changed for a wide range of projects. 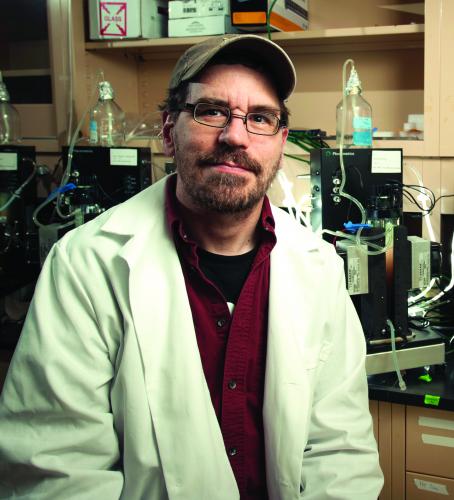 Once data is collected, it is then instantly uploaded to the PhotosynQ website and available for all users. Researchers can even post a project and instructions that allow other scientists to contribute. This vast plant science social network illustrates the extraordinary possibilities of the project.

“Creating a feasible way to get the device out there is a challenge,” Kramer said. “But there’s something that turns out to be more important: community building. If I have one instrument that I give you and you take measurements, that’s not very valuable. What would make that data really valuable is to connect it to other data. Let’s say we give thousands of these instruments to people across the world who take measurements and then compare the results. That’s truly powerful.

“We can get at new kinds of questions, such as which varieties of plants do better under which combinations of climate and management practices, what is the best time to fertilize, and what is the yield of the crop going to be?”

Roughly 200 MultispeQ devices are currently in use around the world. To date, more than 500 users have taken in excess of 100,000 measurements. The volume of data is growing exponentially and allowing farmers to make more accurate predictions about yields, which varieties to use, and when to apply fertilizers.

“Most of the plant research to this point has been in the lab,” Kramer said. “The problem is that, in the lab, the conditions can be so simplified that the work there doesn’t actually reflect what’s going on out in the field. We need people out in the areas where we’re growing plants to have a high capacity to measure things and share that data.”

Mass producing a sophisticated product out of his lab is not realistic, so Kramer and his team are establishing a business, PhotosynQ LLC, to partner with the lab on manufacturing. Kramer plans to start manufacturing in January 2016. Within a year, he wants 10,000 devices taking measurements around the globe.

Funding for PhotosynQ has been provided by the endowment of Kramer’s position, along with grants from the U.S. Department of Energy to the Plant Research Lab and the MSU Center for Advanced Algal and Plant Phenotyping. The Department of Energy is interested in improving the storage of solar energy by plants into biofuels, biomass and bioproducts. In this context, the PhotosynQ platform is being used to understand and improve the efficiency and robustness of photosynthesis.

Three additional grants — two from the U.S. Agency for International Development, the Global Center for Food Systems Innovation and the Legume Innovation Lab, and one from the McKnight Foundation — are helping Kramer’s team implement the technology to improve agriculture in Africa.

“Nothing like this has ever been made, something that gets people of all economic means involved,” Kramer said. “This has a chance to be very disruptive and very transformative. We’re disrupting the entire business model for scientific instruments, while making our product as inexpensive as possible and easy to use. We’re not trying to make money, but we think we can create a viable business that has a big impact.”

The Art of Partnership