Over the past couple of decades, apple orchards around the country have been undergoing a quiet yet monumental transformation.

Over the past couple of decades, apple orchards around the country have been undergoing a quiet yet monumental transformation. Large-canopy trees with knotty trunks and branches strong enough to climb are being replaced by small trees grafted onto dwarfing rootstocks. The trees, a fraction of the size of their predecessors, grow along trellises and produce more fruit on less land than the trees of yore. Plus, they are more sustainable and easier to harvest than the trees in previous systems. (In case you’re wondering, apples are still picked by hand.)

This type of compact growing system is becoming the new norm. Dwarfing rootstocks now account for 85 percent of all apple tree sales, compared with 25 percent in 1995. At the core of this shift is a multistate research project that began nearly 50 years ago with several universities across the nation, including Michigan State University (MSU).

Titled “NC-140, Improving Economic and Environmental Sustainability in Tree Fruit Production Through Changes in Rootstock Use,” the project commenced in 1967 and continues today. Its primary focus has been to evaluate various types of dwarf rootstocks under a variety of growing conditions through the collaborative efforts of researchers and Extension specialists throughout the North America. Earlier this year, the project received the national 2015 Experiment Station Section Excellence in Multistate Research Award.

Granted by the leadership of the Agricultural Experiment Stations (at MSU, AgBioResearch) with funding from the U.S. Department of Agriculture’s National Institute of Food and Agriculture (NIFA), the award is given to multistate research endeavors that have shown tremendous added value, degree of institutional participation, extent of multidisciplinary activity, number of integrated activities and evidence of additional leveraged funding. Considered a hallmark research achievement within the land-grant university system, the award requires collaboration between two or more states to address a shared priority that could not otherwise be addressed. NC-140 will receive $15,000 in additional funds in recognition of the award, and a permanent plaque will be displayed at NIFA in Washington, DC.

MSU horticulturist Ron Perry, administrative adviser of NC-140, said its impact on the industry, growers, consumers and the environment has been instrumental in changing not only the physical landscape of the modern-day orchard but also the productivity, efficiency and sustainability of fruit production.

Perry began working on the project in 1980 as the MSU representative on a technical level. He held that position until 2001, when he was named chairperson of the MSU Department of Horticulture. Fellow MSU horticulturist Gregory Lang was then appointed to fill that role and continues as the MSU member on NC-140 today.

Producing extensive data on topics from disease susceptibility to fruit storage, the project has equipped growers with confidence to make the leap from conventional orchards to high-density plantings. Many orchardists began to gain the confidence to switch to high-density plantings in the late 1990s when data from the project showed the ability to transition from 200 trees per acre to 700 trees per acre, and to speed up profitability from 12 years to eight years.

Traveling the hills of Michigan’s Fruit Ridge just north of Grand Rapids, where about 60 percent of the state’s fresh apples are grown, quickly reveals the transformation. From a distance, these new systems look more like vineyards than the orchards most people are familiar with.

Praise from the field

Now commonly recognized as the primary source for fruit tree rootstock information in North America, NC-140 is the most comprehensive scientific group in the world with 37 partner institutions. The members work with rootstock breeders and commercial nurseries to obtain new rootstocks and to propagate trees for evaluation in multiple locations.

In letters of support submitted on behalf of NC-140 for the NIFA award, industry leaders throughout North America praised the project and its ability to revolutionize fruit production.

Wallace E. Heuser, president of Summit Tree Sales, Inc., in Michigan, said that at its core, NC-140 is responsible for various advancements in the fruit industry ranging from reduced chemical dependency to higher yields.

“The importance of NC-140 and its impact on the U.S. tree fruit industry cannot be understated,” Heuser said. “The enormity of its impact is overwhelming. After much thought, I cannot think of anything else that has made such a major, positive change to the industry.” 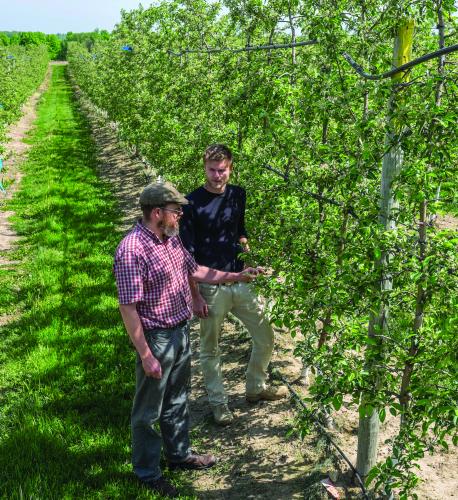 Nick Ibuki, acting general manager of Summerland Varieties Corp. in British Columbia, said NC-140 is the only proven source of reliable information, especially with localized problems such as finding a rootstock resistant to the soil pathogens that cause replant disease, a problem in the northern region.

“Our vision is to continue to use NC-140 information to make informed decisions about rootstock selections that will improve our varieties and support the vitality of the British Columbian apple and cherry industries,” he said.

Michigan grower Phil Schwallier, who is also president of the International Fruit Tree Association (IFTA), refers to NC-140 as the “finest tree-fruit testing project in many years” because of its unbiased rootstock evaluations.

“This multistate project evaluates new rootstocks with uniform protocols across the numerous states and countries and on a widescale basis, and thus quickly discovers the strengths and weaknesses before growers invest time and money into new, highly expensive plantings,” Schwallier said.

Uniform, multilocation trials have exposed new rootstocks to a wide range of biotic and abiotic stresses. New protocols have been adopted to screen for susceptibility to fireblight, a major bacterial disease of apple. Other studies have revealed data on cold tolerance, soil health, plant pathogens and replant disease.

Testing a number of rootstock clones greatly reduced confusion within the industry, which was once dominated by one clone. It also identified replacements for clones with high mortality at many locations. In some trials, certain cultivar/rootstock combinations broke at the bud union, which led to enhanced support recommendations to reduce tree breakage. This project has also shown that rootstock selection by region has minimal impact.

Prior to NC-140, researchers, Extension specialists and growers had to develop their own independent rootstock trials, which could take up to 50 years to complete. Through NC-140, researchers are able to establish uniform rootstock trials on multiple sites around North America, reducing the time to 10 years. Sharing with breeders the summaries of performance and limitations by variations in soils and climate has sped up the process immensely by leveraging resources across institutions and eliminating duplicative efforts.

“Growers generally know the varieties they want, but many struggle with the decision on what rootstock to use,” Baugher said. “The rootstock selection is a difficult decision because it has such critical impact on the success of the new planting. Reliable information on rootstock performance was difficult to access prior to NC-140. Many costly mistakes were made due to the lack of this knowledge.”

Harvesting is another area that has benefited. In 1965, the average U.S. apple planting was on large semi-dwarfing rootstocks, with trees about 18 feet apart and 29 feet between rows. Workers needed to use ladders and even shimmy up tree trunks to pick the apples. Now growers are planting dwarfing rootstocks spaced 21 inches apart in rows 13 feet apart, the result is a much more compact and more efficient space for harvesting and maintenance. Workers ride on platforms between the rows to pick the fruit.

The trees on dwarf rootstock also begin to bear fruit more quickly than conventional apple trees -- in about two to three years, on average, compared with five or six years beforehand.

Bringing added value to the table

Researchers from several disciplines -- including soil science, plant physiology, horticulture, plant breeding, entomology, plant pathology, statistics and agricultural economics -- collaborate on NC-140. Members collaborate on such endeavors as molecular approaches to rootstock breeding programs, and enhancing the efficiency of development and selection of the next rootstock generations through water use evaluations and studies of cold hardiness, fruit size and bloom delay.

Diane Smith, executive director of the Michigan Apple Committee, said the project has also helped the industry meet the growing demand and quality expectations of consumers. Michigan is the third largest apple-producing state in the nation.

“With the highly competitive international market, consumer demand for high-quality fruit, strong pressure to reduce chemical use and a need to enhance economic production efficiency, tree fruit growers must look to economically and environmentally sustainable management practices,” Smith said. “NC-140 has helped deliver these solutions to the industry.” 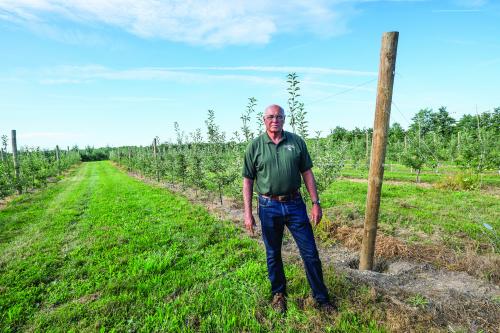 Not only apple orchards in North America, including parts of Canada and Mexico, have benefited -- the impacts have broadened to other fruits as well.

Sweet cherry acreage has increased by 10,000 acres since 1995, in large part because of the plantings of dwarfing Gisela rootstocks. These trees from Germany were first tested on a large scale in NC-140. Planting density has accelerated from 100 to 415 trees per acre, resulting in an estimated annual increase in crop value of $260 million.

With success in apples and cherries, the committee is now looking at dwarf peach and pear rootstocks  on its list of projects.

Researchers work with nurseries to hasten the introduction of new rootstocks into commercial channels. Extensive trials are performed in commercial nurseries on scions propagated on dwarfing rootstocks to produce superior nursery trees for orchardists. The research has advanced the science associated with rootstock development and evaluation through refereed journal articles and scientific presentations.

“Their approach to evaluation puts potentially valuable rootstocks in many testing locations with varied climatic and soil conditions, allowing for rapid assessment,” Rose said. “When NC-140 suggests that a rootstock performs well, we know as farmers that it will perform well.”

To add confirmation to these studies, many growers in various regions often take this information and follow up with a second study on a local level with the scion varieties desired for the region.

In 2013 alone, NC-140 members presented information related to the project at more than 140 grower meetings. This project continues to have a longstanding close association with the IFTA (formerly the International Dwarf Fruit Tree Association). In addition to giving updates on rootstock performance at annual IFTA meetings, researchers have also received funding for uniform trials (to pay for tree costs) and support of critical research regarding independent studies on rootstock issues.

Data has been published on fruit size and maturity, graft union strength, return bloom, and blocking efficiency and sample size for future experiments. In addition, several smaller groups of researchers, in collaboration with colleagues in allied sciences, have investigated aspects of rootstocks that were not addressed in the uniform multilocation trials, such as low temperature tolerance of rootstocks, burr knot development and evaluation of new rootstocks in specific regions.

Some members were also involved in two newer regional projects (NE-183 on apples and NE-1020 on wine grapes) that were modeled after NC-140 with uniform multilocation trials. Data generated from NC-140 and NE-183 was used to develop a website, available nationwide, and to provide research-based information for Extension workers to make local recommendations.

Technical committee meetings have also been held to train future tree fruit workers -- specifically, graduate students and new Extension educators and fruit researchers. Uniform trials have served as replicated testing sites for studies by allied scientists and graduate students on nematodes, fireblight in apple, postharvest storage, cold hardiness and nutrition. Most of the technical committee members have Extension appointments and provide information to stakeholders in their respective regions.

Members have obtained a planning grant from the Specialty Crop Research Initiative called “Root2Fruit SCRI,” and NC-140 maintains a website at root2fruit.org. For fiscal year 2012/2013, the project received $1.2 million, primarily from commodity groups and state sources, and $3.2 million in external grants.