John Besley, an expert on the public perception of scientists, delves into agriculture. Read this and more in the new issue of Futures magazine.

A tiny Lego man sporting a soiled white lab coat, a beaker of fluorescent gunk in each hand, a devilish toothy grin and a head of disheveled gray hair stands on a bookshelf in John Besley’s office in the Michigan State University (MSU) Communication Arts and Sciences (CAS) building. A cross between Albert Einstein and “Doc” Brown from “Back to the Future,” the knick-knack has even made a cameo appearance or two in presentations Besley gives around the world.

Besley, an associate professor in CAS as well as the holder of the Ellis N. Brandt Chair in Public Relations, is a leading expert on the public perception of science and scientists, and he writes a chapter on the topic every other year for the National Science Foundation. His work has revealed that, unlike the mad scientist character often portrayed in fiction, scientists are among the most highly regarded professionals in society. Even children, for the most part, are capable of differentiating between the two.

“There’s a test called DAST – which stands for ‘Draw a Scientist Test’ – and most children who take this will create a sketch of something similar to the mad scientist in the lab imagery,” Besley said. “However, when asked if this is actually a true picture of what a scientist looks like, I’m told they say they know it’s not.”

In public confidence, scientists rank No. 2 – below the military and above the medical profession. Scientists are also routinely viewed as dedicated individuals who are working to solve important, challenging problems.

“The image of the mad scientist in the lab is familiar to every one of us. We’ve all grown up seeing this persona in movies and cartoons. However, people are able to separate it and view it as just a caricature,” Besley said. “In general, they move on to perceive scientists pretty well compared with most other groups -- much better than journalists, politicians or especially lawyers.”

Besley’s expertise recently attracted the attention of leaders at the College of Agriculture and Natural Resources (CANR) and MSU AgBioResearch. They’ve enlisted Besley to embark on a research endeavor exploring how young people perceive career tracks within agriculture, an industry riddled with its own fair share of stereotypes. 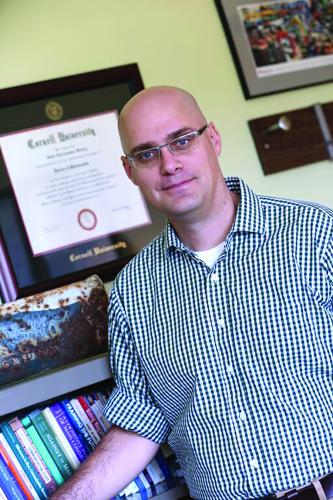 Douglas Buhler, MSU assistant vice president of research and graduate studies and director of MSU AgBioResearch, said the college is working to ensure that potential students have a clear understanding of the importance and the extensive knowledge, technology and precision involved in modern-day farming.

“Work in the fields of agriculture and natural resources is much more complex and advanced than the image most people have grown up with,” he said. “I often wonder if even the industry, to some extent, is helping to perpetuate stereotypes. This research endeavor will help the college better understand how students perceive careers in agriculture and how we might better inform them about the growing career opportunities in this field. ”

Kelly Millenbah, CANR associate dean of academic and student affairs, said that all too often “agriculture and natural resources” translates to “plows, sows and cows.” It’s a myth she wants to lay to rest.

“When I think of people who grow food for a living, I see it as one of the most complicated, complex jobs around,” she said. “You have to know about soil and soil chemistry, plants and how they grow, issues with water, technology, how to handle plants and animals, business matters and communication. It’s enormously interdisciplinary.”

A CANR alumna, Millenbah has long embraced her role as a scientist. Having received both her master’s and Ph.D. in fisheries and wildlife from the college, she has considered herself a scientist since she came to MSU in the early 1990s. Yet, in her professional role now, she often has to explain how the CANR is a STEM-based college (science, technology, engineering and mathematics) to people both on- and off-campus.

“When you think of the college and you look at its diversity – animal science; horticulture; plant, soil and microbial sciences; forestry; fisheries and wildlife; and entomology -- to me, it all exudes science, technology, engineering and math. And when we think about packaging and construction management, it’s all underpinned with mathematics and engineering,” she said. “If people on campus don’t realize this, then our students and our external constituents are not making that connection either. There’s a huge disconnect.”

Besley and Ph.D. candidate Nagwan Zahry have completed the first phase of the research project. High school students and current students within the CANR, the College of Natural Science and Lyman Briggs College were surveyed about what types of factors are associated with a student’s willingness to pursue one of the following career tracks: production agriculture, the built environment, food and nutrition, or natural resources and ecology.

“So we really focused on those factors,” Besley said. “There is this hypothesis that if you tell kids that there is money to be made, then they’ll do it. But that’s not what we’re finding. There is this warmth and competence factor that’s highly involved. Kids want to feel like they’re making a difference in the world, and that they’re surrounded by people who are warm and friendly.”

Besley said these findings make sense, given that data about the millennial generation shows that they are largely driven by social causes. They may also be “optimistically biased” about the likelihood of obtaining jobs after college graduation, he said.

Besley and Zahry are compiling the results now for academic review and planning next steps. These will involve designing and testing various types of messages and students’ reactions. Besley said he plans to start with various types of imagery – one person, groups of people and no people at all – to determine which ones resonate and why.

For Millenbah, it was beneficial to see others like her in the field, even if it was only a few.

“There was a true gender issue when I was pursuing my career,” Millenbah said. “As a female scientist, I had no female science teachers in high school. And when I got to grad school, there was only one woman on the faculty in my home department. I did see more women in the grad school ranks, although there were still fewer women than men. I probably would have left if I hadn’t connected with those women and I hadn’t had the strong support of my mother and father.”

With enrollment at a 40-year high, the CANR is not hurting for students. Millenbah, however, wants to make sure that the right students are attracted to the CANR early on, and for the right reasons. She also sees changes happening, such as more female students than males in the CANR, the trend among people pursuing agriculture and natural resources degrees. Crafting messages that resonate with the students and that showcase appropriate gender and ethnic balances will be of utmost importance moving forward, she said.

Besley agrees, stating that students surveyed most desire a warmth factor. The one potential drawback  -- that’s the one area where scientists typically fall short in the public’s eye.

“When you think of trust, most of us think of two things: competence and warmth,” Besley said. “Most people think trust is competence, and scientists do very well in that regard. The challenge, however, is warmth. The apparent image of scientists is that they’re competent but cold.”

Working to provide science-based research so that the CANR can paint an accurate and timely portrait of agriculture will continue to be a priority.

“There is no doubt in my mind that there are numerous misconceptions about the college right now, and we need to make sure people know what it’s really like, “ Buhler said. “These careers are of huge importance, especially as the world population grows and our resources dwindle.”

Besley said that a DAFT – Draw a Farmer Test – might be in order, if for nothing more than to fulfill his newly piqued interest in the subject.