Every year, growers not only contend with unpredictable weather patterns, changing economics and a dynamic and diverse population of pests bent on devouring their crops -- they also face the perennial issue of plant disease. Spread by a wide range of pathogens -- fungi, bacteria, nematodes and viruses -- plant diseases have the potential for devastating damage. A 2000 outbreak of fire blight carved a wide swath through Michigan’s orchards, dealing the state’s growers an estimated $42 million in losses and destroying roughly 400,000 apple and cherry trees. The disease broke out and spread rapidly, and growers spent years rebuilding their orchards. Last year, an outbreak of white mold in Michigan soybeans destroyed approximately $50 million worth of crops.

Developing technology to ensure that growers have the capability to fight the next epidemic has been the subject of ongoing research at Michigan State University (MSU) and in agriculture and natural resources programs around the country. Now, researchers from three MSU colleges have joined forces to adapt the latest technology from the fields of human medicine and plant genetics and pathology for  tracking and predicting the next major plant epidemic.

"We aim to provide point-of-contact plant disease diagnosis, which will facilitate rapid disease management decisions to minimize crop losses and improve grower profitability," said Chilvers, assistant professor in the MSU Department of Plant, Soil and Microbial Sciences. "The data we collect will also aid in longer term management solutions. For the general public and globally, this will translate into increased food security."

To diagnose plant diseases, the team needed an expert who could identify the genetic markers of plant disease. Enter Day, who has spent his entire career combing plant genomes in an effort to understand how plants resist pathogens. His work has generated an enormous amount of tertiary data on a number of plant species, data that has now found new purpose.

“I looked at this huge amount of collateral data we had on all these different species and asked, 'Are there any alternative uses for this?'" said Day, associate professor and associate department chair for research in the MSU Department of Plant, Soil and Microbial Sciences. “Plant pathogens cause about $60 billion in losses each year in the United States alone. Being able to understand where they come from and how they spread would be a major accomplishment.” 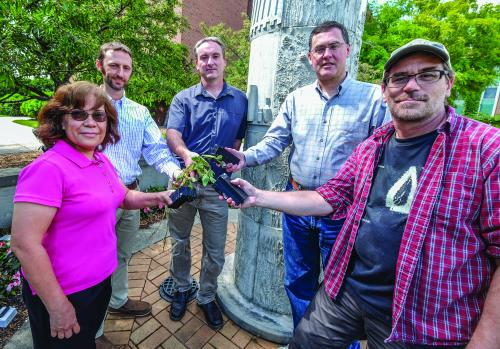 But Day, whose work is primarily focused on fundamental lab-based research, would need help to deploy that data in the field.

He called on Evangelyn Alocilja, professor in the MSU Department of Biosystems and Agricultural Engineering, who had developed a biosensor for detecting pathogens in humans. After conversations, the two researchers realized that the potential for her technology reached beyond human medicine. By adjusting the sensor’s probes and using Day’s genomic data, Alocilja was able to reconfigure the device to target specific plant pathogens.

“The biosensor could allow early and quick screening of plants in the field, which would warn growers about impending outbreaks,” Alocilja said. “Early recognition of pathogens would give them time to implement disease control methods before the pathogens reach epidemic proportions.”

Though the biosensor can detect pathogens, putting that data into a larger geographical context requires an additional tool. Dubbed PhotosynQ, the system is in the final stages of development by David Kramer, MSU Hannah Distinguished Professor in photosynthesis and bioenergetics. PhotosynQ is made up of two equally important components: a handheld device, called MultispeQ, that allows the user to collect data on plant and soil health, and PhotosynQ proper, a web-based database where worldwide users can upload the information they scanned.

"PhotosynQ can collect information that people are taking globally, and we can use that to see where incidences of plant disease are occurring," Day explained. "Sitting here in East Lansing, we can look at data being uploaded by a farmer in Malawi and maybe see the first signs of an epidemic. From there, we can do fundamental research on the ground to try to stop it before it becomes a serious problem."

The more people using PhotosynQ around the world, the better the chances of spotting an epidemic before it begins. Kramer plans to produce the device in large quantities and distribute it to growers around the world at a minimal cost.

"If we can get thousands of devices to people and have them make measurements on data like plant variety, environmental conditions, management techniques, etc., we can generate a massive data set,"  Kramer said. "The more data we have, the better the picture of global plant conditions that emerges from it. That's what we're trying to do with PhotosynQ -- lower the barriers to getting the instruments and the data out there to people."

By combining research from plant pathology, plant genetics and human medicine with cutting-edge technology, the MSU team is pushing the boundaries of what is possible in plant epidemiology. Predicting the next plant epidemic could have far-reaching benefits across the world of agriculture.

"Here at MSU, we're working on deploying next-generation nanotechnology for the detection of plant pathogens. That's really cool," Day said. "This is a way to not only combat disease but to make our data accessible regardless of geography. It's a great opportunity."

CHIA: At the intersection of farming and human health