Science, technology, engineering and mathematics (STEM) may seem daunting, complicated or even irrelevant to some, but Renee Leone is working to change those perceptions. The former psychotherapist, artist and grade school teacher has spearheaded an effort to develop a multi-day venue to spark the imagination, inform and inspire people of all ages. And her efforts have already begun to reap rewards.

In 2013, Leone founded the Michigan State University (MSU) Science Festival, a free public event that offers more than 200 seminars, demonstrations, discussion panels, tours, open houses, guest speakers and hands-on activities on topics from astronomy to zoology. It has taken place every April on the MSU campus since then.

“The festival brings science professionals and the general public together in a truly exciting exchange of ideas, information and experiences. Visitors discover how their interests are connected to science,” she said. “When people, especially children, realize that science is relevant to things that they care about – whether that’s sports, music, video games, phones – it’s similar to the proverbial light bulb going on. We love to offer presentations that make those connections; from the physics that makes it possible for our phones and computers to keep getting smaller, to the chemistry essential to the fields we cultivate and the water we drink. “

The 2016 Science Festival will kick off with keynote speaker, world-renowned physicist Brian Greene presenting “The Drive to Innovate: Stories from the Frontier of Discovery.” Greene, with whom many may be familiar from his two bestsellers adapted to television by NOVA, co-founded the World Science Festival in New York City in 2008 and launched World Science University, which offers free online courses delivered by leading scientists from around the world.

Other plans in the works for 2016 are “A Night at the Museums,” with special events at the MSU Museum and the Eli and Edythe Broad Art Museum; expansion of activities launched last year in Detroit; and a statewide astronomy night. A full listing of activities and events will be available at sciencefestival.msu.edu in January.

“It was amazing, and where I first laid eyes on a 3-D printer. It was a glimpse into the future.  I distinctly recall thinking that Michigan State could do something like this,” Leone said. “MSU has world-class scientists and a curious community, the two most essential ingredients for a successful festival. So I did some research, developed a proposal and presented it to Dr. Hiram Fitzgerald, associate provost for MSU University Outreach and Engagement. He embraced the idea and asked me if I wanted to lead the charge, so to speak.” 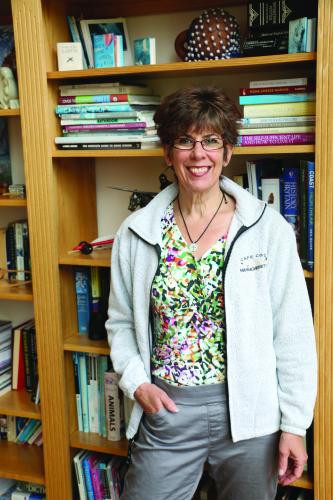 The MSU Science Festival is geared toward lifelong learners of all ages. There are a large hands-on expo area (weekend only), demonstrations that are perfect for families, talks that are particularly appropriate for older schoolchildren and adults, as well as an early childhood zone for ages 6 and under. Leone said she particularly enjoys this area because it nurtures the innate scientific skills of the very young, exemplified by their natural curiosity, willingness to use their senses and eagerness to ask questions.

“In addition to public events, the Science Festival also offers a variety of K-12 school programs. This is a great opportunity for students to meet scientists, and it’s not always what children -- or adults -- expect,” she said. “We ask our presenters to share a bit of their personal stories, their research and the variety of careers connected to their science discipline. This type of live, personal interaction often leads to some surprising revelations for both students and adult audiences.”

Guest speaker Joan Rose, an MSU water scientist, presented at the inaugural 2013 Science Festival, and she was a perfect example of the high level of engagement that takes place. Not only was her research fascinating, but Leone said she was delightfully entertaining.

“Here’s a woman who is globally recognized for her scientific achievements, and she shows up drinking from a coffee cup shaped like a toilet,” Leone said. “She was completely relatable, funny and smart. The audience really enjoyed her. She is just one example of some of the skilled science communicators the Science Festival enjoys highlighting.”

The festival has continued to grow in popularity since 2013. This past spring there were 24,000 visits to the five days of events. Leone said she collected close to 800 evaluations last year, which represented visitors from more than 140 cities across Michigan and 11 other states.

Evaluation surveys also revealed that approximately 60 percent of attendees were only “somewhat interested in science” but were curious enough to attend. This is exciting to the festival organizers because it indicates that the festival was reaching a new audience of visitors who were not already science fans.

“There is this rising tide of interest in science and STEM careers,” she said. “And the science festival partners with MSU and community STEAM (science, technology, engineering, the arts and mathematics) professionals across the state to ensure that all boats rise with this tide.”

Leone explains that STEM is evolving into STEAM in order to emphasize the interconnection of science in art and art in science, and deemphasizing the need to choose one over the other. It is the term the festival now uses for its sponsorship materials, and explains it like this: “At the MSU Science Festival, we believe arts education and the infusion of the arts within the STEM fields is key to creativity and innovation, which is the future of economic growth and prosperity.”

On the basis of separate ongoing research, Leone said there is growing evidence that science festivals provide one of highest forms of engagement. The range of topics that festivals offer is broad, as is the audience age range – from early childhood to retirees. Attendees are also able to participate at their comfort level, whether that’s listening, engaging in discussion or doing hands-on experiments.

“Not only do attendees learn by exposure to science, experience of campus life, lecture halls and professors, but presenters benefit by the opportunity to develop and hone their presentation skills to an audience unfamiliar with scientific jargon,” she said.

Engaging multiple generations is also a priority for festival organizers.

“Not only do adults stay curious after high school and college graduation, but children benefit from seeing the adults in their lives model curiosity and ask questions about important topics. It is wonderful to see,” she said. “I imagine that these families go home and talk about what they learned at the festival at the dinner table that same night and during breakfast the next morning – and that’s my hope. It is also important to me that adults have access to accurate information on the latest in scientific advancements because they will be the ones to make the tools and opportunities available to the next generation.”

Keynote speaker: Brian Greene, professor at Columbia University and author of The Elegant Universe, The Fabric of the Cosmos and The Hidden Reality

Free to the general public (preregistration required for some sessions)