Just before 8 a.m. on a drizzly morning in late August, a black pickup emerges from behind a barn on a farm in Portland, Michigan. The temperature is unseasonably chilly as the thermometer hovers around 55 degrees. Out of the truck steps Jeff Sandborn, accompanied by his young German shepherd, Gretchen.

The 90-acre farm is owned by Sandborn, but it’s only a fraction of the land that makes up his 1,800-acre operation. He’s from the area and grew up on a farm just two miles down the road. While there are no full-time employees on his land besides him, a part-time helper loads grain into a nearby truck, one of the few tasks that can be completed because of uncooperative weather.

Sandborn, 49, is dressed casually — a fleece pullover, jeans and tennis shoes — but there are no overalls in sight. No plaid. No hat. No agriculture stereotypes. After walking into the barn, he changes into a pair of work boots. As he strolls by a large combine, his cell phone buzzes. Throughout the morning, he politely excuses himself to respond to several inquiries. Text messages appear on both his smartphone and Microsoft Band smartwatch, a new gadget in his technology arsenal aimed at making his operation smoother and more efficient.

This is not your father’s farm. Technology is intricately woven into nearly every aspect, from communicating and keeping a schedule with smartphones to high-tech equipment and partnering with a Michigan State University (MSU) researcher. Since he began farming, Sandborn has been keenly interested in how technology can change farming practices for the better.

Like the owner of many family farms passed through generations, Jeff Sandborn Sr. wanted to hand the reins to his son upon retirement. The only requirement was that he receive a formal college education.

The elder Sandborn had hemophilia, a condition that forced him to rely on neighbors and other community members when he could no longer meet the physical demands of farming.

His unexpected death in 1987 led to an acceleration of the original succession plan. Just one year after completing a two-year program in the Institute of Agricultural Technology at MSU, Jeff Sandborn Jr. would have to learn on the fly.

“Usually on family farms, you have grandparents or parents overseeing everything,” Sandborn said. “I didn’t really have any of that when I started. I had to learn as I went, first in partnership with my mother and then eventually on my own. It was tough losing my dad, but it also made me work with others and reach out when I needed help.”

Sandborn became inquisitive, constantly asking others for their thoughts while absorbing as much knowledge as he could. He called neighbors. He attended industry meetings. He joined boards and committees. Anything to continually improve.

Working with fellow growers, just as his father did, became a pivotal part of his day-to-day activities. As his standing in the agricultural community grew, so did his operation. Assistance on his farm is now provided by a retired dairy farmer and a handful of other part-time personnel. Acquiring higher-quality equipment employing leading-edge technology became the next step.

The buildings on the main farm act as a haven for equipment currently in use. Included today are a combine, self-propelled sprayer and a tiler, a piece of machinery that Sandborn acquired three years ago that helps remove excess soil moisture. All of these large machines are fitted with GPS auto-steer, an invaluable equipment upgrade.

“It might sound like it’s not a huge deal, but the auto-steer is great for lessening operator fatigue,” Sandborn said. “You don’t have to be quite as engaged with the movement of the machine and constantly turn your head to see what’s going on behind you. It allows you to watch the planter. I can see what’s going on and troubleshoot any problem if I need to, which really improves the process.”

To monitor his 1,800 acres, he has used various software for yield mapping since 1994 and performed GPS-guided soil sampling for more than 10 years. But it wasn’t until the summer of 2014 that his access to data took a gigantic leap.

In January 2014, at a Michigan Corn Growers Association conference, Sandborn heard a project proposal from MSU AgBioResearch scientist Bruno Basso, an expert in precision agriculture. Basso spoke of an initiative involving an unmanned aerial vehicle (UAV), or drone, that collects data by flying over the field.

Three sensors attached to the UAV measure plant nutrients, temperature and size. Using the data, a grower can determine how to apply the right amount of fertilizer at the right place and time.

In total, Basso’s research covers nearly 20,000 acres across the Midwest. Hearing of the scale of Basso’s reach, Sandborn was intrigued. 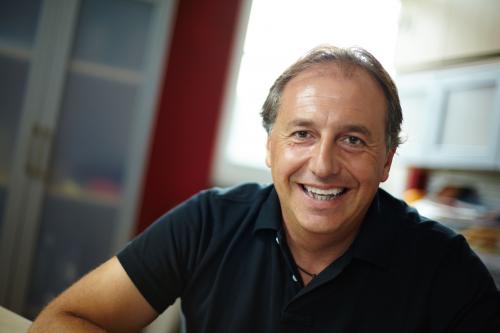 “UAV precision agriculture is something that has been talked about for quite a while now, but it hasn’t been something I dealt with all that much,” Sandborn said. “When I heard Bruno talk about what he was doing, I was really excited. I approached him after the meeting and offered up my farm as a place to conduct some of his research. Anytime you can improve your efficiency, it’s something that can help you tremendously.”

Once data is collected, Basso uses a modeling software developed at MSU called the System Approach to Land Use Sustainability. He can then input soil, water and nutrient data to model crop performance by simulating weather patterns across several years.

“We’ve been looking at how to make Jeff’s operation more efficient with fertilizer application and resource management,” Basso said. “He’s already been doing such a great job. We can do even better in the future in terms of profitability and environmental impact. Jeff has all of the new technology that helps him, but I’ve been so impressed with his detailed approach. We’ve gotten important data from his farm and he’s open to recommendations and feedback, which makes partnering with him mutually beneficial.”

Sandborn said that Basso’s crop model predicted last year’s yield within 5 percent, something he finds promising for the future.

“I thought the work Bruno did last year was very useful,” Sandborn said. “We talk every couple of weeks, and he comes out to the farm quite often. Our communication has been excellent, so I look forward to seeing how we can continue to work together in coming years.”

Basso’s research with Sandborn and nearly 50 other growers is subsidized in part by a $4.9 million grant from the U.S. Department of Agriculture’s National Institute of Food and Agriculture. The five-year grant allows Basso to collaborate with farmers to improve yields through access to large sets of data. Funding has also been provided by commodity groups. For Sandborn, it’s a game changer.

“This is yet another way technology has absolutely revolutionized agriculture,” Sandborn said. “We as farmers could have never dreamed of this just a few years ago. Now we’re starting to really see how technology and working with researchers like Bruno can improve our yields.”

Immediately behind the buildings on Sandborn’s farm is a large field of soybeans. It has become the crop of choice for him because of its profitability. In the past, his land was split evenly between soybeans and corn, but low corn prices have forced a change.

Soybeans still cover nearly half of his land, but the remainder is now home to a distribution of corn and wheat, plus a very small sampling of alfalfa to be used as feed for a neighbor’s animals. The fluctuation in corn prices has been unsettling for farmers such as Sandborn, so he learned more about what could be done with the corn he was producing.

A member of the Michigan Corn Growers Association for the past nine years, Sandborn joined the National Corn Growers Association’s Ethanol Committee six years ago. He became fascinated with the possibilities of alternative fuel, in addition to a co-product called dried distillers grain, a valuable feed for livestock. Now most of the corn grown on his farm is sold to a local ethanol plant.

“The cost of producing corn is prohibitive for many farmers, so it makes less sense for a lot of them,” Sandborn said. “With my corn going toward ethanol locally, that money stays here, which is something I try to do as much as possible. Working closely with the community has been crucial to farmers forever. I think it’s important to continue that.”

In the last week of August, Sandborn attended orientation for new board members of the National Corn Growers Association in St. Louis, Missouri. He was elected to the position and began serving in October. After making a significant impact at the state level serving as chairman of the Michigan Corn Growers Association, he’s ready to take his advocacy to the national stage. 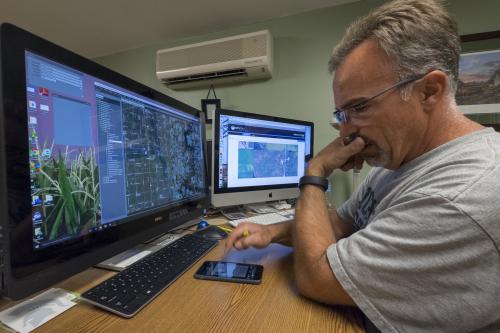 “There’s a lot of misinformation out in the public about ethanol,” Sandborn said. “I think being on the National Corn Growers Association board will allow me to educate people about alternative fuels. Ethanol is an extremely viable fuel because it’s renewable. There has been a lot said by the oil industry about ethanol that just isn’t true, so it will take some effort to fix that reputation.”

Other controversial topics such as genetically modified organisms (GMOs) have divided farmers for years. Regardless of technological advancements, Sandborn wants all growers to understand that while they may not be using identical management methods or growing similar crops, they are all serving the same purpose.

“Agriculture has been an industry with a lot of disagreement and infighting over the years,” Sandborn said. “But farmers need to realize that we aren’t one another’s enemy. Whether you grow conventional crops or organic crops, we are all tasked with a hugely important goal: feeding people. We can learn a lot from one another if we work in partnership, which is still at the heart of agriculture today."