So is the story the large corn and soybean crops coming this year, the fact that the five corn and soybean crops ever have been the past five years, and/or the tariffs on grains?  And then, there is the large world corn and soybeans crops this year, but short wheat crop.  Of course they are all significant factors, but the tariffs are what is making the market risky, the risk being poor prices given the large crops, and really poor prices with the tariffs, which we don’t how long will last, and could go and come back.   The harm from the tariffs are real, whether the trade war is justified or not.  And there is a possibility of longer run affects as well.  Such as an increase in the investment in agricultural infrastructure in other parts of the world.

On August 10 the USDA/NASS released the first of the year survey based forecast for 2018 U.S. corn production at 14,568 million bushels based on August 1 conditions.  This would be the third largest crop on record, just barely smaller than last year, 18 million bushels, 0.1 percent.  The report indicated a record yield of 178.4 bu/ac, 1.8 bu/ac, 1%, higher than last year’s record.  Illinois was projected to have an average corn yield of 207 bu/ac, with Iowa pegged at 202 bu/ac.  The planted and harvested acres were based on the June Acreage Report, which showed planted corn acres down 1.2% and harvested acres down 1.1%.

The forecast is based on a large sample of farmer reported yield projections collected from all states, and field measurement objective yields in the largest corn producing states.  The report assumes normal weather from August 1 through harvest.  To this point moisture has been a bit less than normal, which may bring the final yield down a bit, but we are still looking at a huge corn crop being harvested this fall.

So with lower total supply and more total use, ending stocks are projected to be down 344.  Which lowers the stocks to use ratio from 13.6% to 11.2%.  This leads to a projected $3.60 annual average 2018-19 price versus the $3.40 price for 2017-18.  In Michigan the basis is fairly strong.  If you have a lot of 2017 crop remaining, perhaps consider pricing on market rallies.  But the risk is a settlement with Mexico could happen anytime, or not for quite a while, and what will the settlement be.

The August crop production numbers showed U.S. wheat production down less than 1%, 4 million bushels, from the July Report, but up 7% from 2017.   Food use, feed use, and exports are expected to be up in 2018-19, with exports being the big increase, up 224 million bushels.  The increase in exports is due to world wheat production being down about a billion bushels, mostly due to smaller crops in the EU and Russia.  However, Russia will likely remain the largest exporter of wheat for the second year in a row.

The August crop production report forecast the third record U.S. soybean crop in a row, 4,586 million bushels.  The yield is projected to be 51.6 bu/ac, up 2.6 bu/ac from last year, and second only to the record 52 bu/ac in 2016.    And while the yield may come in a bit lower given August rains to date, it will be very likely be the second highest yield on record.  Harvested acres were projected at 88.9 million, down 0.6 million and the second highest on record.  This number came from the June Acreage Report.

The USDA projects an average annual 2018-19 price of $8.90/bu, down from $9.35 last year. Seems high to me without the tariffs coming off fairly soon.  Remember, tariffs do not mean we won’t export soybeans to China, out largest market normally taking over 60% of U.S. exports.  It means the Brazilian soybean prices will be 24% more than U.S. soybeans.  Giving a market recommendation with the present situation is pretty much impossible.  We have lower prices with the tariffs then we will have if they are taken off, both futures and basis are being affected. 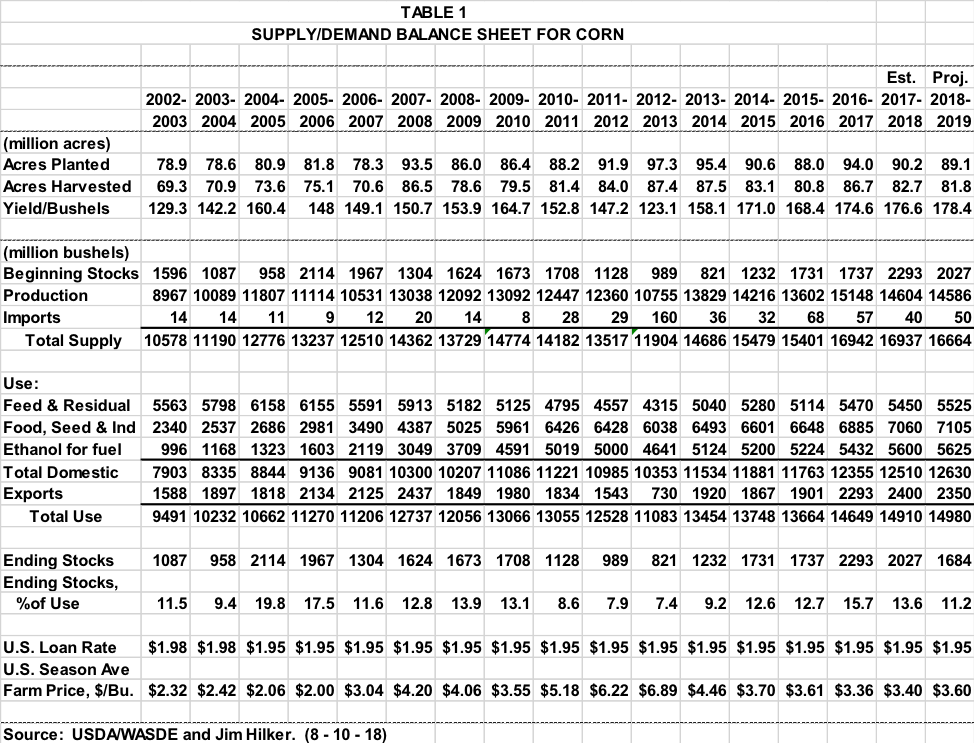 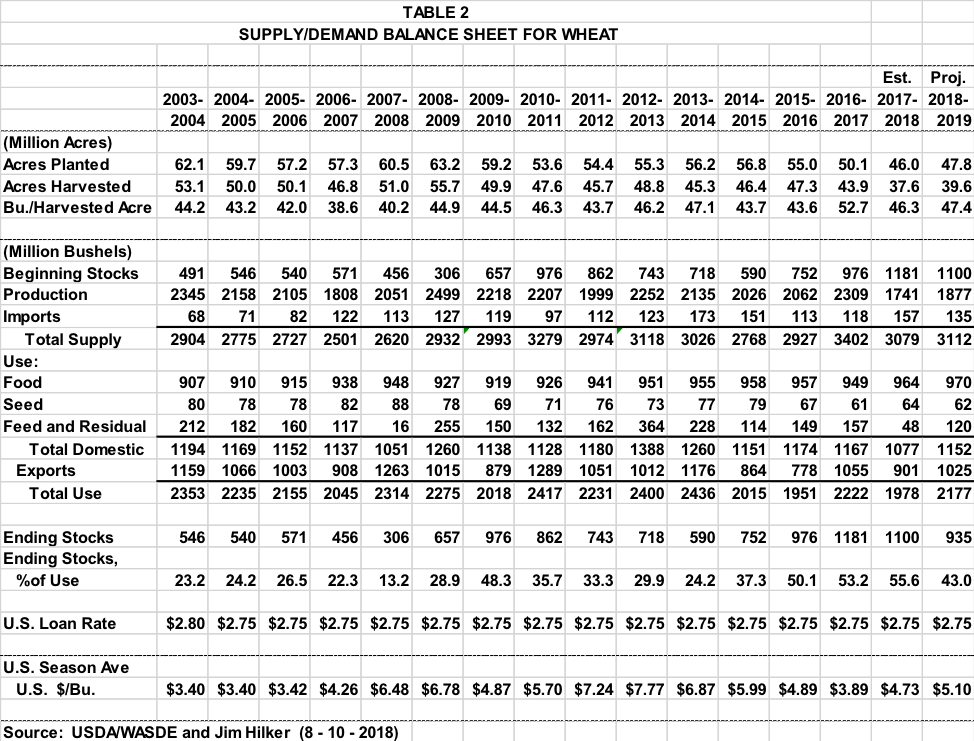 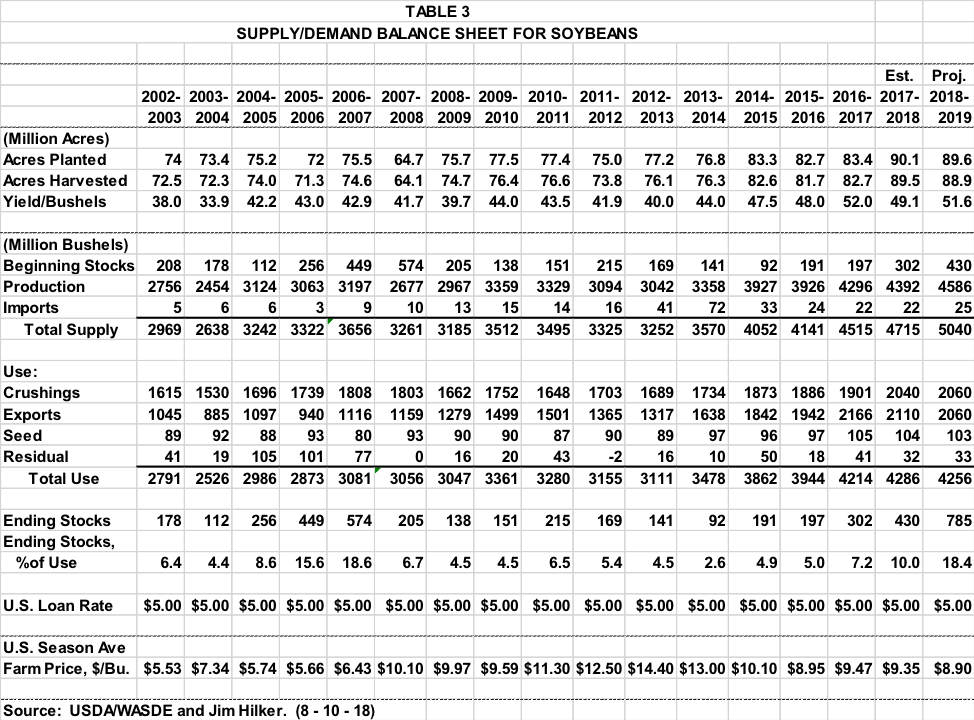