MSU researchers, DNR partner in one of the largest forest diversity studies in the nation

College of Agriculture and Natural Resources researchers Mike Walters and Gary Roloff are teaming up to study ways to increase sustainability and diversity of Michigan's valuable northern hardwood forests.

College of Agriculture and Natural Resources researchers Mike Walters, Department of Forestry, and Gary Roloff, Department of Fisheries and Wildlife, are teaming up to study ways to increase sustainability and diversity of Michigan’s valuable northern hardwood forests.

The study is one of the largest in the country, with Walters and Roloff examining almost 150 30-acre forest stands on public and private land in the Upper and Lower peninsulas.

The Michigan Department of Natural Resources (MDNR) Forest Resources and Wildlife divisions are partnering to fund the six-year, $1 million project. 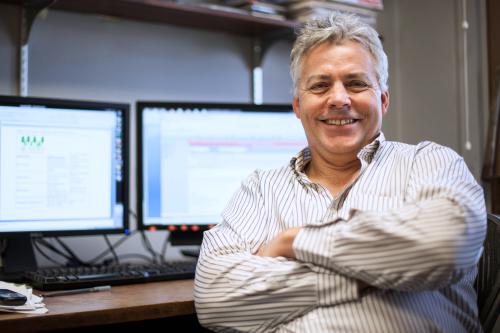 “There are really two big challenges facing our forests,” Walters says. “The first is ensuring that a healthy diversity of tree species are regenerating in these forests, and the second is restoring the northern hardwood forests that have been degraded by beech bark disease.

“We want to keep diverse northern hardwoods as part of Michigan’s working forests,” Walters says. “When we manage forests for diversity, they are less susceptible to invasive pests, and they contain multiple sources of food for wildlife.”

The loss of tree species diversity and, in some cases, reduced stocking levels in Michigan’s northern hardwood forests are linked to many factors. Walters and Roloff identified three that they think are particularly important:

“Deer are an important part of the northern hardwood forests, both ecologically and recreationally,” Roloff says. “Our challenge is to figure out ways that deer and other wildlife and diverse northern hardwoods can co-exist, because both are critical elements of Michigan’s natural resources.”

Walters and Roloff will measure hardwood seedling growth and survival, quantify deer use and browsing behaviors in harvested areas, and assess the impacts of competing vegetation resulting from a variety of forest management techniques. They will also evaluate the use of small-scale treatments such as scarification, herbicides and seeding to encourage hardwood regeneration and survival.

Roloff and Walters will work closely with MDNR staff members from both the Forest Resources and Wildlife divisions.

“Working directly with the MDNR will help us ensure that the design, layout and implementation of the treatments are operationally feasible. The overarching goal is to develop integrated silvicultural techniques aimed at restoring northern hardwood regeneration to adequate stocking levels and achieving diversity in landscapes that also support deer,” Walters says.

From left, professor Mike Walters, doctoral student Catherine Henry and off-campus labor aide Evan Farinosi measure and mark the boundaries of a plot of land near Frederic, Mich. They require extensive sight lines to have a minimal margin of error when mapping the almost 1150-foot long edge of the forest stand.

CANR meets academic needs to prepare students for their futures