Our day was spent visiting various farms. It was not only an education about Vietnamese agriculture but also about their culture. Each farm we traveled to was extremely welcoming. Our guide/translator said that the farmers had never had foreigners on their farm before. They were so excited to visit with us, let us take pictures, and invite us into their homes

We started the day by getting an overview of the surrounding area by one of the local residents. They called the area a commune. He explained to us, through our translator, that the largest crop in the commune was rice, but they were switching a lot of the rice land to aquaculture because it made better money. He said that the poverty rate in the commune is currently five percent. Ten years ago this rate was more than 35 percent. I couldn’t believe how quickly they improved their economy.

We went to a few different types of farms today. The first was considered a large-scale farm. They had 6,200 laying hens, 40 sows, and 200-300 growing pigs and fish. When we were walking into the farm they were bagging up the chicken manure. They sell this manure to be used as fish feed. I thought it was a really neat way to turn a waste product into a money maker. It was a different concept to me.

We also visited a poultry breeding farm. They bred ducks, chickens and pigeons. While we were there they sold some of their chicks. The woman who bought the chicks had a plastic grocery bag with some straw in the bottom. She loaded up the chicks in the bag and off she went. It really struck me because I would never think of something like this happening but it is a daily occurrence here in Vietnam. 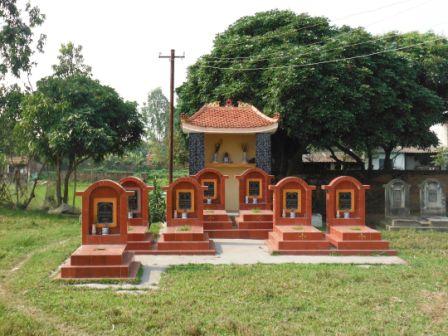 On the walk to our last farm we passed multiple cemeteries. When the Vietnamese bury their dead they first bury them under an unmarked mound. Once the body decomposes the family moves the bones to a family grave site with an elaborate grave stone. This notion was odd to me because for us we bury our dead once and don’t have anything to do with their bodies again.

Grazing within the cemeteries were some cattle. We were told that they were a local breed called yellow cattle. All of the older cattle were tied up. There was a rope connected to the ground and ran up and through the cattle’s nose with a knot on the end to hold it in. I thought this was really interesting because I had never seen anything like it.

Katelyn and her classmates studied in Vietnam March 2 to 10, 2013 as a part of a Michigan State University class on emerging issues and sustainability in international agriculture.