A different type of melting pot

Today we went to a farm that makes its own cheese. We tried two very young cheeses and two older cheeses. Carmen's favorite cheese was a 3 year old aged cheese that tasted like a very sharp cheddar. We also toured the farm. It was a 3rd generation farm, much like Carmen's, His farm was very unique because it was a historical landmark, therefore he could not change the outside of the barn though he wanted to change the interior due to high levels of asbestos.

One very unique thing about his farm was the use and distribution of the land. Fourteen farmers in the area split up the land to use it to its highest potential. We thought that seemed like a great use of the land.  The farmer said that each of the fourteen farmers had a signature product to minimize the competition. The farmer acknowledged that by opening his tours to the public he could help educate the public, as many of the farmers, and students of Michigan State do.  When we asked him about how the lifting of the quota would effect his farm he said it would  not change his farm at all because the manure laws in the Netherlands would not allow it.

Our second event of the day was a boat tour in Amsterdam. We rode through the channels of Amsterdam.  We saw many different ethnicities and different architectural styles. The buildings were absolutely amazing. The churches of Amsterdam were of all different religions, which is much different than Belgium where the only religion is catholic. 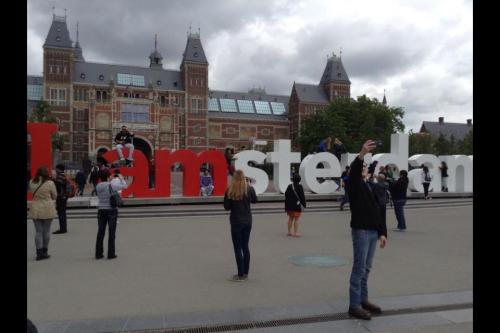 Next we went to a tour of the Anne Frank House and museum. This self guided tour opened our eyes to the actual living conditions of those in hiding as we explored Anne's life. The Frank and van Pels families went into hiding on July 6, 1942 and remained inside for nearly three years before being discovered. We were struck by the bravery exhibited by Meip, Johannes, Victor, Bep, and the other workers in Otto Franks business. They were the ones who agreed to help the Jewish families without hesitation and were the only reasons the families survived in hiding for those long three years.

Our night ended at Kantjil, a Dutch Indonesian restaurant. Aside from the delicious food we noticed that groups are encouraged to share a meal served "family style."  The idea of sharing meals, and group checks, bring people together for good food and good fellowship.

As we reflected on today we noticed that many different groups and types of people worked well together. I think we could each learn something from this lifestyle.  There are many different cultures in Holland, specifically Amsterdam, but the people work for a common goal, to prosper in the face of adversity.