Today we are in our second day at Ghent. We visited three different places today. The first place we visited was the Tyne Cot Cemetery. This cemetery is dedicated to many soldiers lost in World War 1, or as stated on the headstones "The Great War." Many of us walked around the cemetery looking through the names of fallen soldiers. We were looking for our own last names, but didn't have any luck.  We learned that many Dutch surnames were changed during the war because they were controlled by the French. The surname Goodenough was one that caught our eyes. Often the French could not understand what the Dutch surnames meant and they would become frustrated.  We noticed many of the graves had poppies near them; the poppy was used from a poem written in 1916 called In Flanders Fields, by a lieutenant colonel during the war.

After the Tyne Cot Cemetery, we visited a very well-managed dairy farm that had both Belgium Blue for meat and Holsteins for milk. We learned that the Belgium Blue calves grow about 5.5 lbs. per day as opposed to a Holstein calf that 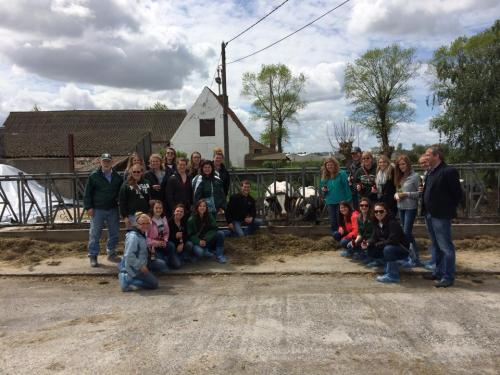 grows about 2.2 lbs. per day. Belgium Blue cattle are not widely seen in the United States and even Europe is questioning whether they want to keep the breed in the industry because with this breed, they cannot calve naturally which leads to many dystocia problems.  Ninety nine percent of this breed has to have caesarian sections, all of which have to be done by a vet. In America, farmers do many things that the vet does in Europe as well as many other countries.

After the farm visits we went to Ghent University where we toured it. The vet program had a barbeque that that some of the students put together for us. It was really generous of them and it was also pretty tasty.