Students from various majors and departments were honored in March during the Michigan State University (MSU) College of Agriculture and Natural Resources (CANR) Annual Honors Banquet.

Students from various majors and departments were honored in March during the Michigan State University (MSU) College of Agriculture and Natural Resources (CANR) Annual Honors Banquet.

Two special awards, the CANR Outstanding Leadership Award and the Howard and Lili Ann Camden Endowed Teacher/Scholar Award, were given at the end of the night.

The CANR Outstanding Leadership Award is given annually to a senior in the CANR who demonstrates outstanding leadership, service and a desire to learn. This year’s recipient is Haley Schulz, an environmental studies and agriscience major from Pigeon, Michigan.

Schulz currently serves as the president of the CANR Student Senate and was named to this year’s Homecoming Court. She has also completed several internships and works now as the state office coordinator for the Michigan FFA Association.

“This award is the direct reflection of the support I've received from advisors, professors, mentors and colleagues during my time at MSU,” Schulz said.

As a part of receiving this award, she will address the 2015 graduates during the CANR commencement ceremony at 7:30 p.m. May 9 in the Breslin Center. 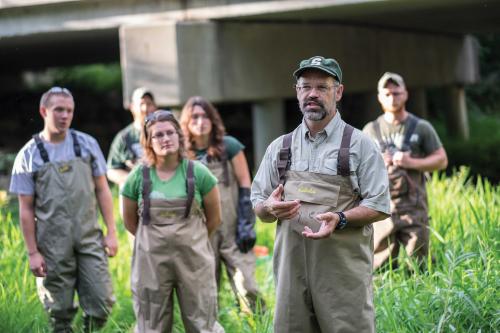 Dan Hayes, professor and associate chair in the Department of Fisheries and Wildlife, received the Howard and Lili Ann Camden Endowed Teacher/Scholar Award. This award recognizes a faculty member who exemplifies the high-quality teaching standard in the CANR.

“Dr. Hayes stands above his peers in nurturing in the students he teaches a deep appreciation for and passion about the fisheries and wildlife discipline,” said Kelly Millenbah, associate dean and director of academic and student affairs in the CANR, when she presented Hayes with this award.

Hayes has been a professor in the Department of Fisheries and Wildlife for more than two decades. His research focuses primarily on how fish habitats influence their population dynamics. His work is supported by MSU AgBioResearch.

The award is named after Howard B. Camden, an MSU graduate who was successful in the insurance industry. Along with his wife, Lili Ann, Camden dedicated his life to giving back to MSU, the arts and medical research.

More information about both awards can be found on the CANR website on the Awards & Nominations page at http://www.canr.msu.edu/faculty_staff/awards_nominations.